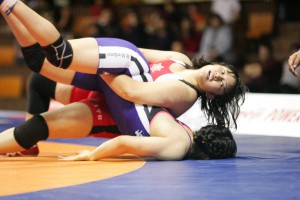 TOKYO (December 23)—Rio Olympic champion Sara DOSHO captured her sixth straight national title, while Shinobu OTA was the lone Olympic medalist of the four in action to fail to come away with a title at the All-Japan wrestling championships.

Dosho plowed through the competition in the women's 69kg division, putting away high schooler Miwa MORIKAWA by technical fall at 4:29 (10-0) of the final. None of Dosho's three matches went the distance, and she did not surrender a point.

"I wasn't able to train very much after the Olympics, but as the champion, I felt I couldn't lose," Dosho said. "Next year is the world championships and I'll do all I can to win the gold medal. My aim is already on the Tokyo Olympics and a second straight title."

For her efforts, Dosho, a senior at powerhouse Shigakukan University, also took home the Emperor's Cup for the first time as the nation's top wrestler of 2016. 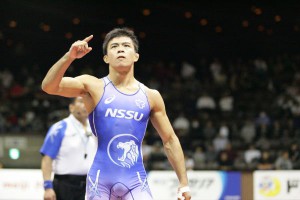 Ota, the Rio silver medalist at 59kg in greco-roman, was dethroned in a wild and wooly final by collegiate champion Kenjiro FUMITA, who scored a takedown in the last three seconds for a 9-7 win between past and current stars at Nippon Sport Science University. Up to the final, Ota had spent a total of just 5:11 on the mat disposing of three opponents.

After the first period ended tied 4-4, Ota took a 7-4 lead before Fumita scored with a 2-point throw. With the clock ticking down, Fumita finished off a dramatic takedown to go ahead 8-7. An unsuccessful challenge by Ota added the final point to Fumita's tally.

Risako KAWAI, the Rio gold medalist in the women's 63kg class, dropped down to her natural weight class of 58kg and, in the final, gained two points while her opponent was on the passivity clock en route to a 3-0 victory over Chiho HAMADA, the 2014 world champion at 55kg. It was the second national title for Kawai, who won at 60kg last year. 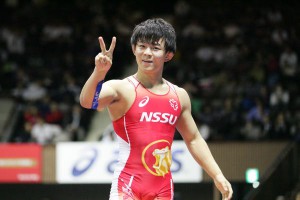 There was no stopping mighty mite Rei HIGUCHI, the men's freestyle 57kg silver medalist in Rio, as he stormed to the 61kg title with remarkably similar victories along the way, capped by a technical fall in 2:00 over 2014 champion Shoya SHIMAE.

Fumita, Kawai and Higuchi were also honored with the outstanding wrestler awards for their respective styles.

Skipping the three-day tournament at Tokyo's Yoyogi No. 2 Gym, which was also serving as a qualifying meet for next summer's world championships in Paris, were Olympic gold medalists Eri TOSAKA (48kg) and Kaori ICHO (58kg) and silver medalist Saori YOSHIDA (53kg).

In other action, two-time Olympian Sosuke TAKATANI showed he was still the man to beat in the men's freestyle 74kg class, making it six in a row with a comprehensive 10-1 victory in the final over teen collegiate champion Yajiro YAMASAKI.

Each of the first two days of the tournament saw the crowning of a 17-year-old champion, with Sae NANJO taking the women's 55kg title on Wednesday and JOC Elite Academy and Abe Gakuin High School teammate Yui SUSAKI triumphing at 48kg the next day.

Susaki, the world cadet champion, won three straight matches by 10-0 technical falls to make the final, where she finished the day unscored upon by posting a 6-0 victory over Asian junior and collegiate champion Kika KAGATA, who had knocked off defending champion Yuki IRIE 7-6 in the quarterfinals.

Among other first-time champions, who accounted for exactly half of the 24 titles at stake, was recently crowned world 55kg champion Mayu MUKAIDA, who claimed the women's 53kg crown vacated by Yoshida with an 8-2 victory in the final over 2013 51kg champion Yu Miyahara.

One question that was answered on the second day was whether three-time freestyle champion Atsushi MATSUMOTO could successfully make the transition to greco-roman, the style in which older brother Ryutaro won a bronze medal at 60kg at the 2012 London Olympics.

The younger Matsumoto showed he was up to the challenge, defeating Ryuji SHIOKAWA 4-1 in the 85kg final to add the greco gold to the three he captured in freestyle in 2011, 2013 and 2014. That stamped his legitimacy after he won the title at the less-competitive National Games in his first foray in greco.

"Afer I lost at last year's trials (for the Rio Olympics), I thought (my career) was over," Matsumoto said. "As time passed, the disappointment started getting to me, and with encouragement from my brother, I decided to keep going by trying greco."

Ironically, Matsumoto emulated his coach Shingo Matsumoto (no relation), who completed the two-style double in 2008–but in reverse order. Shingo won nine straight greco-roman titles from 1999 to 2007 at 84-85kg, then tried his hand at freestyle in 2008, when he ended his career with the 96kg crown. As an even further twist of fate, Ryutaro was in Shiokawa's corner during the final as his coach at Nippon Sport Science University.

In the men's 57kg freestyle, Yuki TAKAHASHI, a member of the Japan national team to two world championships, finally earned his first national title when he overpowered Toshihiro HASEGAWA to win by technical fall in 2:58 (13-2).

Two heavyweights claimed their third national titles, with Arata SONODA making it three straight in the greco-roman 130kg class and Hiroe SUZUKI regaining the women's 75kg crown that she previously won in 2012 and 2014.