More than three decades had past since Japan won a gold medal in either men’s freestyle or Greco-Roman at a world championships. Both those droughts ended last week at this year’s world championships in Paris, while in between, Japanese women re-exerted their dominance by capturing four golds. 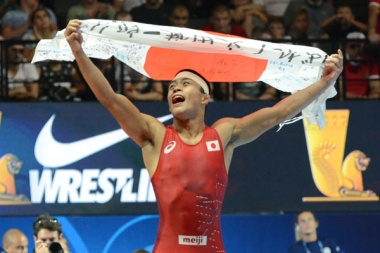 Kenichiro FUMITA got the ball rolling on the second day of the six-day tournament by winning the 59kg Greco title, beating Mirambek AINAGULOV (KAZ) 2-1 in a repeat of the final at the Asian Championships in New Dehli in May.

The victory made Fumita the nation’s first world champion in Greco since Masaki ETO won the 57kg title in 1983. The last global gold for Japan came a year later when Atsushi MIYAHARA triumphed at 52kg at the Los Angeles Olympics.

Fumita, who had to defeat Rio 2016 silver medalist and training partner Shinobu OTA just to make Japan’s team to Paris, also became, at 21 years 8 months, Japan’s youngest-ever Olympic or world medalist in Greco, and the eighth global champion overall in that style.

Fumita, who was limited in executing his trademark back suplex by his opponents’ defensive postures, defeated 2016 Asian champion Kanybek ZHOLCHUBEKOV (KGZ) in the semifinals 2-1.

For Fumita, a student at Nippon Sport Science University, it was the first step toward his ultimate goal of winning gold at the 2020 Tokyo Olympics. “I want to get two more [world gold] medals going into the Tokyo Olympics,” Fumita said. “That’s gets me closest to gold medal in Tokyo.” 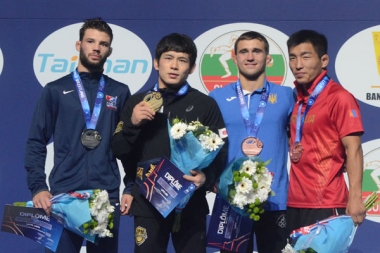 Three days after Fumita’s victory, Yuki TAKAHASHI ended a slightly longer gold medal drought for Japan in freestyle when he overwhelmed Thomas GILMAN (USA) 6-0 in the final at 57kg.

That made Takahashi the first world freestyle champion from Japan since 1981, when Toshio Asakura captured the 52kg gold. Tatsuhiro Yonemitsu won the 2012 London Olympics gold at 66kg.

Takahashi, 23, continued a gold rush that started with Fumita and extended through the two days of women’s action.

“I felt the pressure of continuing the consecutive days of gold medals, but I also used that as motivation,” Takahashi said.

After showing his vast potential in high school by winning three straight national titles and a Youth Olympic gold, Takahashi gained a reputation on the senior level as a wrestler who could not win the big matches when they counted.

He changed that image by striking gold at the Asian Championships in May, and confirmed it in the quarterfinals in Paris, when he defeated Bekhbayar ERDENEBAT (MGL) to avenge a loss at the 2015 world championships that had played an indirect role in his failing to make the Japan team to Rio.

Takahashi came off the mat as the winner by big point after the match ended tied 4-4. He followed that up with a 7-2 win over Vladimir DUBOV (BUL) to advance to the final.

Japan’s only other medal in the men’s competitions came at freestyle 70kg, in which two-time world junior medalist Yuhi FUJINAMI took home a bronze in his senior debut with a one-sided 11-0 technical fall over Zurabi ERBOTSONASHVILI (GEO) in the third-place playoff.

Fujinami, a teammate of Takahashi’s from the kids level up to Yamanashi Gakuin University, where he is still a student, knocked off 2016 bronze medalist Moustafa HOSSEINKHANI (IRI) 7-6 with a late takedown in the quarterfinals before losing a close 5-3 decision to James GREEN (USA) in the semifinals.

Rinya NAKAMURA made it to the bronze-medal match at freestyle 61kg, but lost by fall in 2:35 to Yowlys BONNE RODRIGUEZ (CUB).

In one of the most bizarre incidences of the tournament, Sosuke TAKATANI recorded a victory by fall over Grigor GRIGORYAN (ARM) in the qualification round at freestyle 74kg—only to see the decision changed to a disqualification when Takatani showed officials where the Armenian had bitten him on the stomach while in a cradle.

The freestyle team finished sixth in the nation standings with 28 points to earn a spot at next year’s World Cup, which Japan will host in Takasaki. 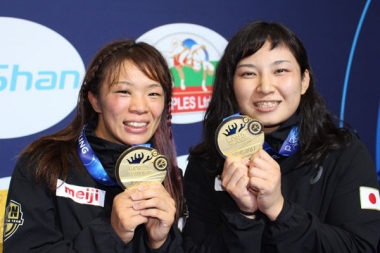 In the women’s tournament, Olympic champions Risako KAWAI and Sara DOSHO followed up on their successes in Rio by winning their first world golds, while teenagers Yui SUSAKI and Haruna OKUNO also reached the top step of the medal podium.

Kawai, the Rio gold medalist at 63kg, dropped down to 60kg and claimed the top prize with a 13-0 technical fall victory at 5:26 over Pan American champion Allison RAGAN (USA). It was her first world title in three attempts.

With Saori YOSHIDA and Kaori ICHO putting their decade-plus-long runs on hold as the elites of women’s wrestling, Kawai has stepped up as one of the new faces for Japan. Her name recognition became apparent in an strange occurence, when a tournament official mistook Kawai’s sister Yukako (the entry at 63kg) for her sister and mistakenly made her a seed in the draw.

There are two sides to becoming well known, however, and Kawai realized that her rivals had been studying her style, and it led to giving up points.

“I had points scored on me in the first and second rounds, and it’s been awhile since I’ve had such tough matches,” said Kawai, who easily won the Asian title in May. “I thought, what does it mean to have someone analyzing me? It made me realize the greatness of Saori and Kaori.”

Dosho, who had a world silver and two bronzes to her name going into Paris, avenged a defeat in the final of the 2014 world championships by handling Aline FOCKEN (GER) 3-0 in the 69kg final.

Dosho overcame her biggest hurdle in the her opening match in the second round, when she needed to score the last point to overcome a partisan crowd-backed Koumba LARROQUE (FRA) 3-3. In the succeeding three matches, she did not surrender a point.

“I was able to become the Rio Olympic champion, but I had not yet been the world champion,” Dosho said. “With this, I feel I have become the true champion.” 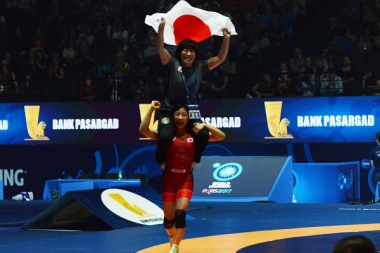 At 48kg, 18-year-old Susaki has emerged as a viable challenger to Olympic champion Eri TOSAKA, who has been sidelined since Rio due to injury.

Susaki, the three-time reigning world cadet champion and current trainee at the JOC Elite Academy, made the transition to the senior level as smooth as her silky takedowns, while also adding in some rolling techniques that were so blatantly missing when she won the Asian gold in New Delhi.

In the final, Susaki gave up an early 4-point move to European bronze medalist Emilia VUC (ROU) to trail 4-2, but then reeled off her own scoring maneuvers to chalk up a 14-4 technical fall in 3:42.

“I trained so hard to become a world champion, I’m so able that I was able to achieve it,” said Susaki, who became the first Japanese high schooler to win a world title since Icho did it in 2002.

Kawai, Dosho and Susaki all won on the same day, and Japan literally came within seconds of making it a clean sweep of the four golds on offer.

But Mayu MUKAIDA, the 2016 world champion at 55kg who had dropped to 53kg, was tackled onto her back for a 4-point move in the final seconds of the final against Vanesa KALADZINSKAYA (BLR) and lost 8-6. Mukaida had led 6-1 after the first period.

As Kaladzinskaya hugged her coach in triumph, Mukaida remained sitting on the mat in shock. 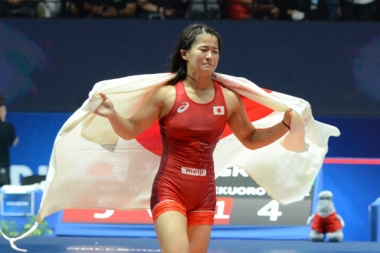 On the previous day, 18-year-old Okuno provided the lone gold medal for Japan when she spoiled a bid by Odunayo ADEKUOROYE (NGR) to become the first African world champion by forging out a 5-4 victory in the 55kg final.

Okuno, a world cadet champion who is now a first-year student at powerhouse Shigakkan University, relied on her powerful double-leg takedowns to steam into the final with a pair of 8-0 victories and an 11-0 technical fall in the semifinal over Bilyana DUDOVA (BUL).

But against the lanky Adekuoroye, Okuno opted to aim for single legs. In the second period, she scored four points with a single-leg takedown to a roll that gave her an unassailable lead. The Nigerian scored a late takedown that only narrowed the margin of victory.

Japan also got a bronze medal a 75kg from Hiroe SUZUKI, who won her first medal in four trips to the world championships and the first for Japan in the heaviest weight class since Kyoko Hamaguchi in 2010.

Suzuki lost 6-1 to eventual champion Yasemin ADAR (TUR) in the quarterfinals, but won her repechage match to advance to the bronze-medal playoff, where she topped Epp MAE (EST) 6-0.

Japan easily won the team title with 60 points, well ahead of Belarus and the USA, who tied for second with 38.