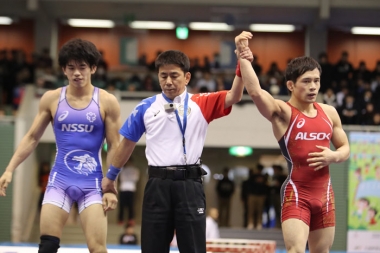 Takahashi, coming off an historic victory at the world championships this summer in Paris, overwhelmed collegiate champion Toshihiro HASEGAWA, 12-4, in the final of the freestyle 57kg class on the last day of the four-day All Japan championships at Tokyo’s Komazawa Gym.

In a rematch of last year’s final in which Takahashi won his first national title, he spotted Hasegawa four points in the first period, then calmly reeled off successive points in the second to claim the victory.

“There was still three minutes, so there was no reason to panic,” Takahashi said of giving up the early lead. “I thought just build up points one at at time, and I felt I had some leeway.”

Takahashi, who became Japan’s first freestyle gold medalist at a world championships since 1981, was further rewarded for his efforts with the Emperor’s Cup as the most outstanding wrestler. 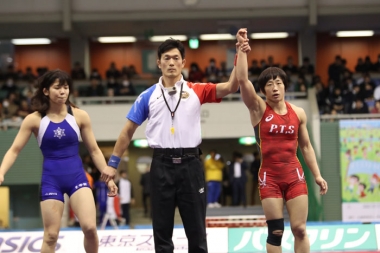 Susaki, who had been virtually unbeatable over the past two years as she made the jump from three-time world cadet champion directly to senior gold medalist, was dealt the most surprising loss of the tournament, falling by technical fall to Yuki IRIE in the semifinals of the women’s 50kg division.

Prior to the tournament, there was great anticipation of a showdown between Susaki and Rio Olympic champion Eri TOSAKA, who had returned to competition in September following foot surgery.

But Tosaka, who suffered left knee and ankle injuries during training in October, withdrew from the tourney as a precaution after winning her quarterfinal match. That the final would also be missing Susaki seemed inconceivable.

Irie, however, had not come out of nowhere. Two years ago, when Susaki was 16, the two met in the All Japan final, and Irie scored a 10-0 technical fall victory for her first and, until Saturday, only national title.

On Saturday, Irie fended off everything Susaki threw at her, and scored with a pair of low single-leg attacks. With time running out, Susaki became desparate and gave up points that gave Irie another 10-0 technical fall, with the end coming at 5:48.

“Without being concerned about winning or losing, I thought that if I did what I needed to do, the result would come,” Irie said. “I stayed focused on that.”

Susaki was left in tears. “I didn’t train hard enough,” she said. “I believed I could win, but she was better than me. I couldn’t do my style of wrestling. It was the same way that I lost two years ago.”

Irie found the going tougher in the final, when she had to hold off a late surge by world under-23 champion Miho IGARASHI to emerge with a 5-4 victory.

“I had intended to stay on the attack up to the end, but at times I got defensive, and it put me in a dangerous situation,” Irie said.

Like Susaki, Fumita had been on quite a roll. And like Takahashi, he had ended a long Japanese drought at the world championships, becoming the nation’s first Greco-Roman champion since 1983 with a victory at 59kg. 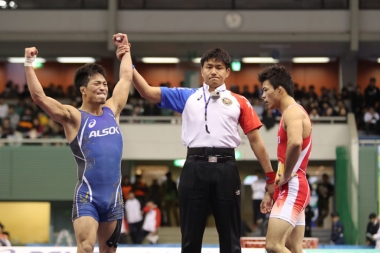 The weight class, now 60kg, might be new, but it included a old rival in Rio Olympic silver medalist and training partner Shinobu OTA. Fumita, a student at Nippon Sports Science University, beat Ota last year at the All Japan and again at the Meiji Cup to earn his ticket to Paris.

On Saturday, Ota turned the tables, scoring a 2-point throw with :20 left for a 5-4 victory to regain the national title he first won in 2015.

“It took a long time to get back here,” Ota said. “Over these two years, there were a lot of tough memories. From now, I can consider the 60kg weight class mine and I’ll work hard to keep it.”

In other action, world and Olympic champion Sara DOSHO ran her winning streak of national titles to seven with a victory by fall in the women’s 68kg final over Mai HAYAKAWA. Dosho turned Hayakawa onto her back for a 10-0 lead, then completed the fall in 1:44. 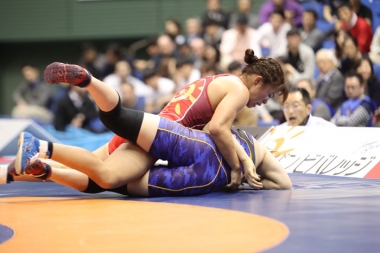 Risako KAWAI, also a world and Olympic gold medalist, needed to win only one match to take the women’s 62kg title, and she did it with a 10-0 technical fall in 3:47 over Yurika ITO for her third straight national title. Kawai, with a bye into the semifinals, advanced to the final when her opponent defaulted.

Okuno won the world gold at 55kg, but moved down as that was not among the six designated weight classes for the 2020 Tokyo Olympics.

Miyu MUKAIDA, the world silver medalist at 53kg, moved up to 55kg and captured her second national title with a 4-2 victory over Saki IGARASHI.

That made the Kawai sisters the first to win titles at the same All Japan championships since Chiharu and Kaori ICHO in 2007.

“She [Yukako] had always said let’s win titles together,” Risako Kawai said. “She won hers first, and I had to follow. I was a bit nervous, but I’m glad I could follow up.”

There were other families celebrating success during the tournament, which was extended to four days for the first time to adopt the new UWW format of separating premilinary rounds and finals staged over two days. 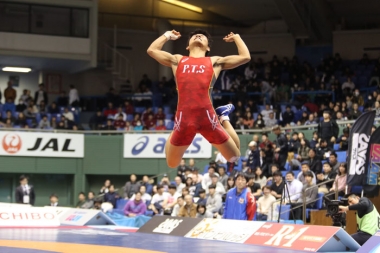 Daichi TAKATANI captured his first national with a victory in freestyle 65kg, a day after older brother Sosuke TAKATANI, winner of six consecutive titles at freestyle 74kg, secured No. 7 after moving up to 79kg.

That made the two the first brothers to earn gold medals together since 2011, when Ryutaro MATSUMOTO won in Greco-Roman and sibling Atsushi became a freestyle champion.

Sosuke Takatani showed he could handle the extra weight—a prerequisite for his eventual jump to the Olympic weight of 86kg—by scoring a 10-0 technical fall with one second left in the final against collegian Tsubasa ASAI.

After a grueling path that included 13-11 and 12-7 victories, Daichi Takatani was not to be denied in the final and forged out a solid 11-2 win that relegated Kei YONEZAWA to the silver medal for the second straight year.

Yuhi FUJINAMI, the world bronze medalist at 70kg, succeeded Sosuke Takatani as 74kg champion by beating Ken HOSAKA by fall in 1:53 in the final.

“My body is still light [for 74kg],” said Fujinami, who ousted last year’s 70kg champion Momojiro NAKAMURA by technical fall in the semifinals.

“Even if I win at 74kg in Japan, the world level is very high. Right now my ability is not enough, my strength is not enough. I’ll work hard to be competitive on that level.”

In the women’s upper weights, twin high schoolers Naruha and Yasuha MATSUYUKI established themselves as prospects for the 2020 Tokyo Olympics by coming away with gold and silver medals, respectively. (Older brother Taisei won a freestyle 86kg bronze).

Naruha, a world under-23 silver medalist, beat her sister to a national title by beating Masako FURUICHI, 6-1, in the 72kg final. World under-23 champion Yasuha pushed world bronze medalist Hiroe SUZUKI to the limit at 76kg but lost 2-0.

The increase in weight classes from eight to 10 lifted the chances for former champions to regain titles, and for newcomers to win their first.

Inoguchi’s rise to national champion is particularly noteworthy, as the 21-year-old never made it past the quarterfinals of a major tournament while in high school. He won a 9-7 thriller over Ryo MATSUI for the gold.

Shirai won his title with a 7-1 victory over Masao MATSUSAKA, reversing the outcome of the 2016 final.

Arguably the most dominant performance was turned in by Arata SONODA as he powered to a fourth straight title in Greco-Roman 130kg. After posting technical fall victories in :28 and :31, Sonoda needed just 1:48 to defeat Masahiro TANITA by 8-0 technical fall in the final.

The Sonoda family, however, was denied a golden double when younger brother Taira was dealt a 3-2 loss in the freestyle 97kg final by Takeshi YAMAGUCHI, who picked up his fifth career title and first in two years.