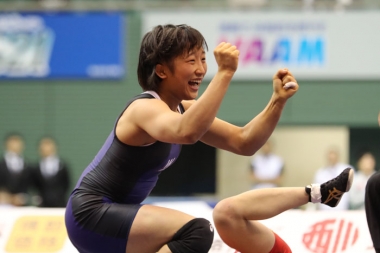 Teen star Yui SUSAKI avenged the most devastating loss of her short but sterling career to win the women’s 50kg gold at the Meiji Cup All-Japan Invitational Championships in Tokyo, keeping her on track to defend her world title in Budapest in October.

Susaki’s victory by fall at 3:37 in the final over Yuki IRIE, who beat her in the semifinals en route to the title at the Emperor’s Cup All-Japan Championships in December, set up a playoff between the two for the ticket to Budapest.

The Waseda University freshman will be looking to join fellow world champions Yuki TAKAHASHI, Haruna OKUNO and Risako KAWAI, who were among 20 wrestlers who clinched berths on the team to Budapest by completing the national double with victories at the four-day tournament at Komazawa Gym.

Susaki’s showdown with Irie will be one of 10 playoffs to be held July 7 at Wako, Saitama Prefecture, in conjunction with the All-Japan Non-Student Championships.

“I lost at the Emperor’s Cup so I thought, I have nothing to lose, just put up a firm challenge and come out with the title,” said Susaki, who won her third straight Meiji Cup gold. “I was the aggressor and controlled the flow of the match, and I think that led to the victory.” 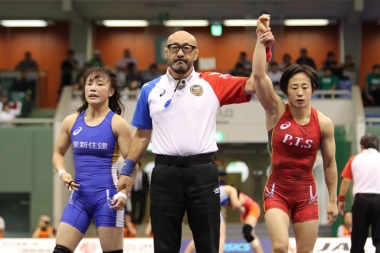 Left out of the running at 50kg was Rio 2016 Olympic champion Eri TOSAKA, whose comeback from a spate of injuries hit another snag when she fell 6-2 to Irie in the semifinals.

“My physical preparation and current condition were not bad,” said Tosaka, who was competing in just her third tournament since her triumph in Rio and underwent foot surgery last year. “My opponent had a stronger desire to win and that was why I lost.”

Susaki’s loss in the Emperor’s Cup semifinals had further ramifications, as it kept her from being selected to Japan’s team for the Asian Championships in February, the Women’s World Cup in March and the upcoming Asian Games in Jakarta.

“This time, I lost at the Emperor’s Cup and that kept me from being able to enter various tournaments,” Susaki said. “Seeing wrestlers other than me competing is very hard to take…So the only road open to me was to win here and get to the world championships. It became an obsession.”

As part of her preparation, Susaki won the 50kg gold medal at the Klippan Lady Open in February, beating Rio 2016 silver medalist Mariya STADNIK (AZE) in the final. 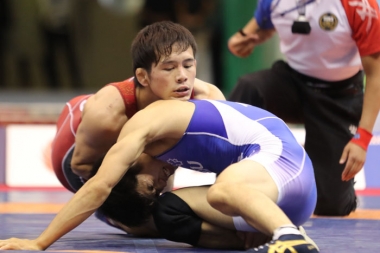 Meanwhile, Takahashi had little trouble in storming to his second straight title and fourth overall, chalking up two 10-0 technical falls before easily handling Toshihiro HASEGAWA 7-2 in the freestyle 57kg final.

“I was able to score points off my attack,” the 24-year-old Takahashi said. “I’ve worked hard with the aim of going to the world championships and defending my title. Anyway, I have to forget this tournament and start preparing for the next.”

For his efforts, Takahashi was awarded the Meiji Cup as the tournament’s most outstanding wrestler, adding to the same honor he received at the Emperor’s Cup.

Kawai, the Rio 2016 gold medalist at women’s 63kg, will be heading to Budapest with younger sister Yukako KAWAI, after the two repeated their victories from the Emperor’s Cup—but after switching weight classes.

Risako Kawai dropped down to 59kg, where she scored five takedowns in a 10-0 technical fall in the final over Yuzuru KUMANO. The previous day, Yukako secured the 62kg gold by beating Yurika ITO 4-1, a victory that otherwise left her in tears for lack of zip in her performance.

“I aimed for the title and I’m glad that I got it, but I couldn’t do anything I had practiced, so it’s very disappointing,” Yukako said. “I had worked on shooting for takedowns in practice, on responding to the opponent and consciously thinking not to get too high in my stance. I didn’t do the very basics.”

The sisters’ duel victories set up an unusual situation in which they technically can face each other in the playoffs for both weight classes. But as things stand, the sisters have agreed to compete in Budapest in the weight classes that they won at the Meiji Cup.

Okuno earned a chance to repeat as world champion 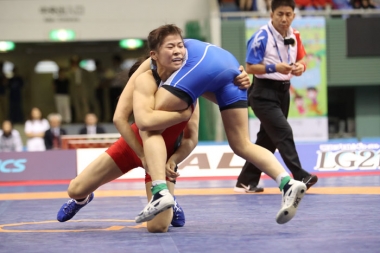 Okuno earned a chance to repeat as world champion when she scored a 4-point takedown and defeated Yu MIYAHARA 6-0 in the women’s 53kg final for her second straight title.

“The 53kg class is said to be Saori Yoshida’s weight class, but I want to show that it’s mine now,” Okuno said. “By continuing to win, I believe it will lead me to the Tokyo Olympics [in 2020].”

In other action, world silver medalist Mayu MUKAIDA won the women’s 55kg title with a solid 9-0 victory in the final over Saki IGARASHI, her third straight Meiji Cup triumph.

That puts Mukaida, the 2016 world champion at 55kg, in position to redeem herself for her stunning last-second loss at 53kg at the Paris 2017 world championships, in which she gave up a 4-point move at the buzzer and lost 8-6 to Vanesa KALADZINSKAYA (BLR).

The two male silver medalists from Rio 2016 had contrasting results, in line with their disparate situations, with only one earning a ticket to Budapest. 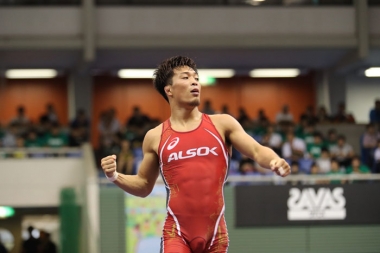 Shinobu OTA, with rival and reigning world champion Kenichiro FUMITA sidelined with a knee injury, captured the Greco-Roman 60kg gold to follow up on his triumph at the Emperor’s Cup, where he defeated Fumita.

Ota eked out a 2-1 victory in the final over Hayanobu SHIMIZU, with both of his points coming from passivity, while he gave up one for fleeing. But a win is a win, and his first Meiji Cup title also earned him a place at his first senior world championships.

“It’s very disappointing that I didn’t score any technical points,” Ota said. “At the end, I had no intention of fleeing, but I gave that impression and it gave him a point. That’s a sign of my immaturity and a lack of practice. I’ll work harder so I can always aim for a technical fall.”

Rei HIGUCHI, the Rio 2016 silver medalist in freestyle 57kg, has moved up two divisions to the Olympic weight class of 65kg, but his bid for a shot at a world title came up short when he fell 9-0 in the final to Yamanashi Gakuin University freshman Takuto OTOGURO.

“There’s no big difference between second place and losing in the first round,” said Higuchi, who knocked off Emperor’s Cup champion Daichi TAKATANI in the second round. “Stamina was not a problem, but I’m still inferior in terms of physical strength at 65kg.”

Otoguro, the 2015 world cadet champion at 54kg, will now face Takatani in the playoff for the world team spot. His older brother, Keisuke OTOGURO, will also be in a playoff, where he will face Jintaro MOTOYAMA at freestyle 70kg.

The inspirational story of the tournament came at women’s 68kg 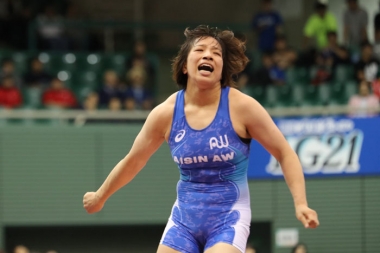 The inspirational story of the tournament came at women’s 68kg, where Rio WATARI posted an emotional victory to cap a comeback from a two-year absence as she battled Hodgekin lymphoma, a form of cancer.

Watari, a Meiji Cup winner in 2014, added drama to already intense moment by scoring a decisive step-out point with :06 left in the final against Chiaki SEKI for a 3-2 victory.

Watari made nationwide news two years ago when, in a crusade to make the Rio Olympic team at all costs, she went up two weight classes to 75kg and earned the berth in qualifying. However, there would be no further miracle in Rio as she lost her opening match, a defeat that she has every intention of redeeming.

“It’s not yet the Olympics, so this doesn’t erase what happened in Rio,” she said.

Because the Emperor’s Cup winner at 68kg, world and Olympic champion Sara DOSHO, is sidelined with a shoulder injury suffered at the Women’s World Cup, Watari automatically earned the spot on the team to Budapest.

Another performance worth noting was turned in by Atsushi MATSUMOTO, who returned to freestyle after a year-long stint in Greco-Roman and remarkably captured the 92kg title, the sixth of his career.

Matsumoto set up a playoff by scoring a solid 7-1 victory in the final over Emperor’s Cup champion Takashi ISHIGURO.

“I still have the playoff to go, so I can’t get complacent,” said Matsumoto, whose return to freestyle was spurred by the rule changes in Greco-Roman that added more ground wrestling, the weakest part of his game. He originally switched to Greco after failing to make it to Rio 2016 in freestyle.

Among the wrestlers making the world team for the first time, Asian champion Shota TANOKURA has established himself as a legitimate medal hope at Greco-Roman 55kg. In the final, Tanokura gained the bulk of his points with a front headlock throw in beating Shota OGAWA 7-0.

Tanokura had retired after the lightest weight class was raised to 59 then 60kg, taking a job as a physical education teacher at a Tokyo high school. When the 55kg division was reinstated, he kept his job but returned to the mat.

“I competed once in Europe,” he said, referring to a second-place finish at the Dan Kolov-Nikola Petrov Tournament in Sofia in March, “and my impression is that Asian wrestlers are stronger than the Europeans in the lighter weights. All that remains is to aim for the gold at the world championships.”

Paris 2017 world bronze medalist Yuhi FUJINAMI withdrew from the Meiji Cup due to a fractured cheek bone suffered in practice in May, and will have to earn a place in freestyle 74kg in a playoff with Ken HOSAKA.