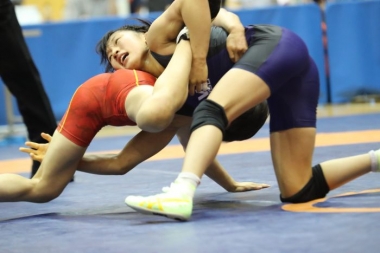 Susaki, the 2017 world champion at 48kg, trailed 4-0 going into the second period when she launched her comeback, capped with a takedown in the final 15 seconds to earn a place on team to the world championships in Budapest in October.

Irie had beaten Susaki in the semifinals en route to winning the title at the Emperor’s Cup in December, but Susaki, now a freshman at Waseda University, avenged the loss with a victory in the final of the Meiji Cup, thus setting up the playoff.

Meanwhile in the other action at Wako Municipal Gym, Yuhi FUJINAMI, a freestyle world bronze medalist at 70kg in 2017, earned a ticket to Budapest at 74kg by storming to a 14-2 technical fall victory in 5:09 over Ken HOSAKA. 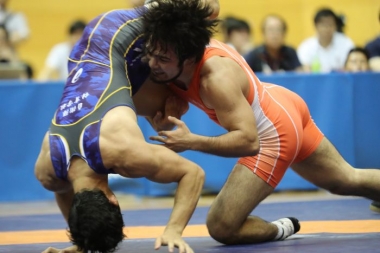 Fujinami had missed last month’s Meiji Cup to recover from a fractured cheek bone suffered during practice in May.

The brother tandam of Takuto and Keisuke OTOGURO will join Yamanashi Gakuin University teammate Fujinami on the plane to Budapest after both emerged victorious in their respective playoffs in freestyle.

Takuto Otoguro overwhelmed Emperor’s Cup champion Daichi TAKATANI in the 65kg division, rolling to an 11-0 technical fall victory in just 1:55, and older brother Keisuke followed in the next match by defeating Jintaro MOTOYAMA, 5-3, at 70kg.

Their victories gives Japan two sets of siblings on the team to Budapest along with sisters Risako and Yukako KAWAI, who had already secured their places.

In other freestyle playoffs, Atsushi MATSUMOTO capped his return to freestyle after a year in Greco-Roman by beating Takashi ISHIGURO 8-2 at 92kg; Takeshi YAMAGUCHI rallied from a 6-2 deficit to defeat Naoya AKAGUMA, 14-8, at 97kg; and Taiki YAMAMOTO topped Nobuyoshi ARAKIDA, 4-1, at 125kg.

In the other women’s berth up for grabs, world U23 champion Ayana GEMPEI earned her first trip to the senior worlds by topping Ayaka ITO, 4-2, at 65kg.

The playoffs were held between the respective winners of the Emperor’s Cup in December and Meiji Cup in June. Wrestlers who won both tournaments automatically filled berths to the world championships.