In a historic clash of Olympic champions, Kaori ICHO pulled off a dramatic victory over fellow Rio 2016 gold medalist Risako KAWAI in the women’s 57kg final at the All-Japan Championships in Tokyo.

Icho scored a takedown with 10 seconds left to defeat Kawai 3-2 in the last match of the four-day tournament Dec. 20-23 at Komazawa Gym, which was also serving as the first stage in the qualifying process for the Tokyo 2020 Olympics.

Meanwhile, newly minted world champion Takuto OTOGURO was awarded the Emperor’s Cup as the most outstanding wrestler for 2018, capping the year by storming to his first national title in the freestyle 65kg class.

In other notable results, Paris 2017 world champion Kenichiro FUMITA came out on top in his fierce rivalry with Rio 2016 silver medalist Shinobu OTA to regain the Greco 60kg title, while Rio champion Sara DOSHO capped a return from shoulder surgery to cautiously take the women’s 68kg gold and extend her streak to eight straight national titles.

Two high-profile withdrawals of world champions just prior to the competition, also referred to as the Emperor’s Cup, negated what would have been more clashes of titans among the women.

Yui SUSAKI, the 50kg gold medalist at the world championships in Budapest, pulled out after not fully recovering from a dislocated elbow suffered at a national training camp in November, while 53kg champion Haruna OKUNO was sidelined with a stomach virus.

Those two, along with Kawai and others who failed to strike gold, will have another chance at the All-Japan Invitational Championships (Meiji Cup) to earn a place on Japan’s team to the 2019 world championships in Astana, Kazakhstan, in September.

Those world championships will have special meaning for the Japanese wrestlers, as anyone who wins a medal in Astana automatically secures the spot on the team to the Tokyo 2020 Olympics. For that reason, this year’s Emperor’s Cup featured a massive scramble into the six Olympic weight classes in each style, while leaving some divisions, mainly non-Olympic ones, with just a handful of entries 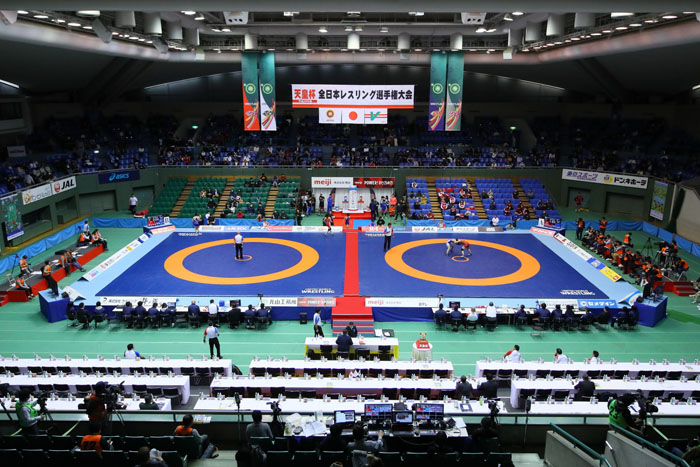 The 57kg class, with just seven entries, was divided into two preliminary round-robin groups and Icho and Kawai were grouped together. They both advanced to the semifinals, which they won to set up a rematch in the final.

Kawai, whose aim is to make the Olympics with younger sister and 62kg winner Yukako KAWAI, won the world title at 59kg, but dropped down to the Olympic weight of 57kg, setting up the highly anticipated battle with Icho.

Their first match evolved into a tedious tangle with little initiative from either wrestler, and all three points were scored with the opponent on the activity clock. Kawai came away with the victory by being awarded two points Icho’s one.

That loss was Icho’s first to a Japanese wrestler since 2001, when she was defeated by Saori YOSHIDA in the third-place match at the All-Japan Women’s Championships.

”At this stage, I am the challenger,” said Icho, who had not competed for over two years after Rio before returning to competition in October. “Since the Olympics, Kawai has been leading the pack in Japan, and I became aware in the first match how much she has raised her level.”

In the final, Kawai scored with a first-period step-out, and then both gave up a point on the activity clock to give Kawai a 2-1 lead midway through the second period.

With the clock ticking down, Icho made her move. Using a snapdown and then shuffling to her left, she latched onto Kawai’s right leg. Kawai attempted a switch, which Icho countered by stepping over and completing the takedown with :10 on the clock.

The victory raised her career total of national titles to 13, tying her with Yoshida for third on the all-time list. She also has 10 world titles to go with her four Olympic golds, and is now a step closer to adding to both tallies.

”Given that I have a two-year blank and am not yet being back to 100 percent, it’s a great feeling to still be able to win,” Icho said. 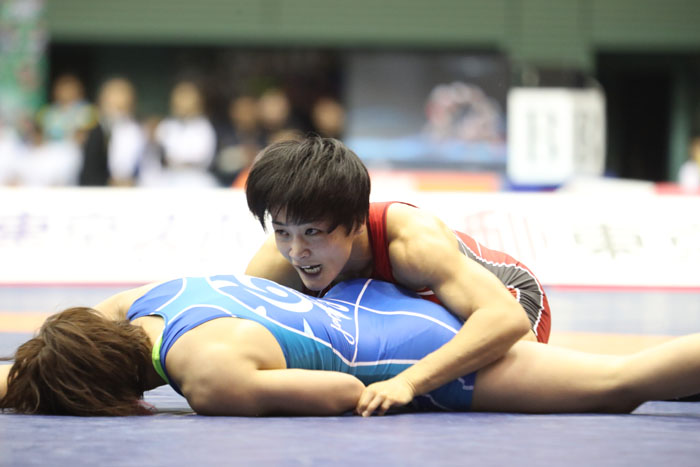 Just as Otoguro did in becoming the youngest-ever male Japanese world champion at 19 years 10 months, he wasted little time in securing his first national crown.

The Yamanashi Gakuin University star, showing no effects of the ankle injury suffered in Budapest that caused him to miss the collegiate championships in November, needed just 33 seconds to defeat Daichi TAKATANI by 10-0 technical fall in the 65kg final.

After gaining a takedown with a double-leg tackle, Otoguro secured an ankle lock and ripped off four rapid-fire rolls to end the bout, a repeat of his victory over Takatani in the playoff for the team to Budapest.

Despite the injury curtailing his preparations, “I was able to wrestle as usual at this tournament,” Otoguro said. “Next time I will be more aggressive.”

In the semifinals, Otoguro defeated Rei HIGUCHI, the 57kg silver medalist in Rio, 8-3. Higuchi, who has struggled to find success at higher weight classes, defaulted his bronze-medal match. 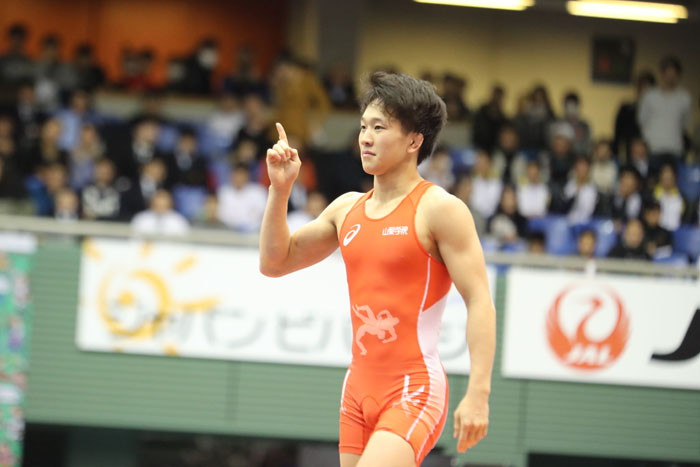 Dosho, whose injury at the Women’s World Cup in March and subsequent surgery kept her from defending her world title in Budapest, played it conservatively at the Emperor’s Cup, doing just enough to get the job done.

With just five entries, the 68kg class was a straight round-robin, and the normally aggressive Dosho avoided going for tackles that could put undue strain on her shoulder. She scraped together four victories by decision, clinching the gold in her final match with a 2-1 victory over Rio Olympian Rio WATARI.

”The details of how I wrestled weren’t good, but rather than how I did it, I was only thinking of the result,” Dosho said, adding she would be “120 percent” aggressive in her next competition when the shoulder is fully healed. 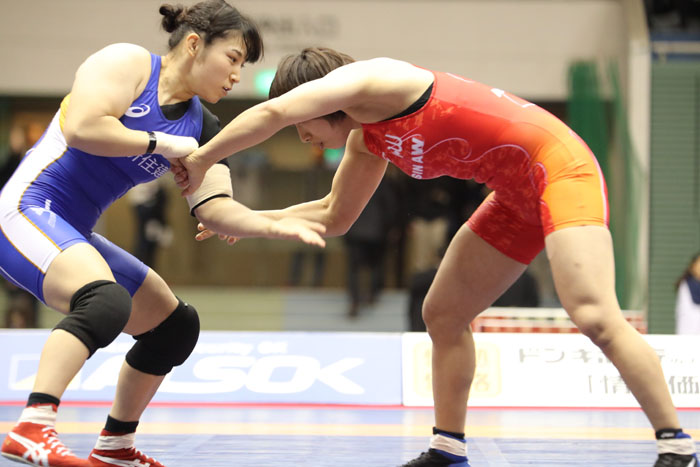 The women’s 50kg class was billed a battle royale between the trio of Susaki, Rio gold medalist Eri TOSAKA and 2017 Emperor’s Cup champion Yuki IRIE, and once again it was the latter who came away with the gold.

Irie, who beat Susaki in last year’s final before losing to her in both the Meiji Cup and subsequent playoff to miss out on the world championships, faced Tosaka in the semifinals and powered her way to a 4-4 victory on big-point criteria. She followed that up the next day by beating 2017 world junior champion Kika KAGATA 6-0 in the final for her third national title overall.

At 53kg, the withdrawal of Okuno opened the door wider for world 55kg champion Mayu MUKAIDA, who had dropped down to the Olympic weight class in which she won the world title in 2016. Had the two faced each other, it would have marked the 11th time in Japanese wrestling history that two reigning world champions met in a domestic tournament.

The absence of Okuno did not mean Mukaida would have an easy ride to a third straight national title. In the final, she was pushed to the limit by Nanami IRIE, Yuki’s equally scrappy younger sister, giving up four late points before holding on for an 8-6 victory.

Yukako KAWAI, the world silver medalist and world U23 champion, notched a 3-0 victory over Yuzuru KUMANO, the world U23 bronze medalist at 59kg, in the 62kg final to add to the 59kg national title she won last year.

In other featured freestyle divisions, world bronze medalist Yuki TAKAHASHI moved closer to getting a shot at regaining the world title he won in 2017 by fending off up-and-coming teen Kaiki YAMAGUCHI, 6-4, in the 57kg final. Takahashi has now won three straight titles. 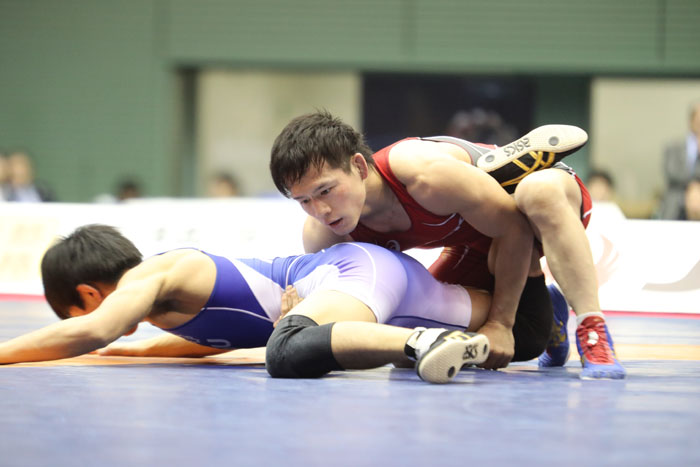 Yuhi FUJINAMI, who also would have something to prove in Astana, won a second straight title at 74kg with a victory by fall in 1:44 over Ken HOSAKA in the final. Fujinami won a world bronze at 70kg in 2017, but came away empty-handed from Budapest after moving up to 74kg.

Sosuke TAKATANI, Fujinami’s predecessor as 74kg champion, made a successful debut in the next Olympic weight class of 86kg, also with a victory by fall in the final. Takatani, who wrestled at 79kg last year as a stepping stone for his move to 86kg, decked Shota SHIRAI in 2:43 to notch his eighth straight title.

World bronze medalist Atsushi MATSUMOTO picked up his first freestyle title in four years and fourth overall with an 11-4 victory over Ryoichi YAMANAKA in the 92kg final. Matsumoto had spent over a year at Greco, winning the 85kg national title in 2016, before switching back to freestyle.

In Greco, the latest clash in the great rivalry between Fumita and Ota lived up to its billing, with Fumita scoring a late 4-point move off a counter in the 60kg final to win 7-1 and regain the title he first won in 2016.

Fumita lost to Ota in last year’s Emperor’s Cup, then suffered a knee injury just before the Meiji Cup, thus losing the chance to force a playoff and earn a chance to defend his world title.

”This was a really tough year,” said Fumita, who now has a 5-4 lead in the head-to-head series with Ota. “My goal of winning a gold at the Tokyo Olympics kept me going.” 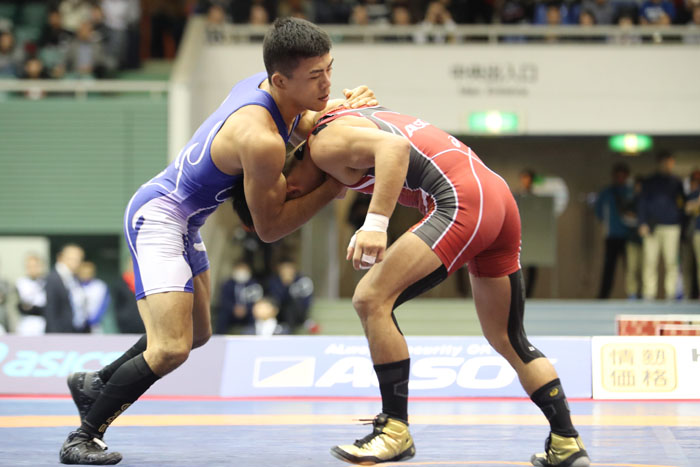 Shogo TAKAHASHI avenged a loss in last year’s semfinal to eventual champion Tsuchika SHIMOYAMADA, beating him 4-2 in the 67kg final to regain the title he first won in 2016.

Neither of the two national champions from 2017, Shohei YABIKU or Yuya MAETA, made it to the final at 77kg, where Naotsugu SHOJI defeated Kodai SAKURABA 4-0 for his first title.

In the semifinals, Sakuraba knocked off the three-time defending champion Yabiku 5-3, while Shoji scored an 8-5 victory over Maeta, last year’s 82kg winner who had dropped down to the Olympic weight.

Yuya OKAJIMA completed his unusual journey to the top of the medal podium when he captured the 82kg title with a 3-1 win over Yoji KAWAMURA. Since switching to Greco from freestyle in 2015, the Takushoku University product’s progression of finishes at the Emperor’s Cup were as follows: fourth, third, second, first.