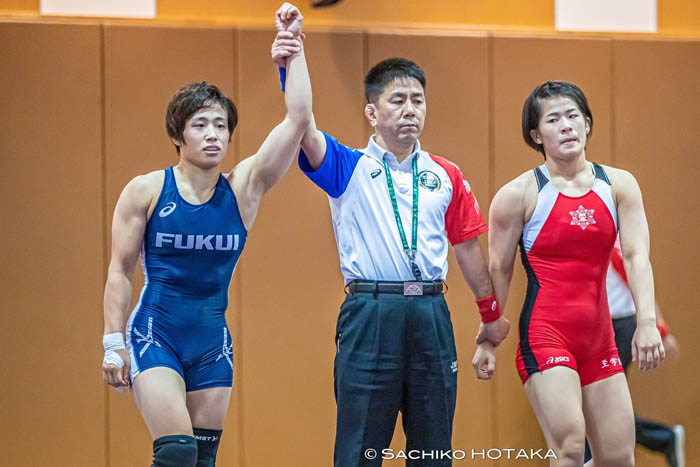 TOKYO—Nanami IRIE joined her older sister on Japan’s team to the World Championships. And just like Yuki, Nanami earned her ticket to Kazakhstan by beating a reigning world champion in the national team playoffs.

Irie defeated Haruna OKUNO 3-1 in the women’s 55kg class as Japan completed the selection process for its world team with the final round of playoffs in the non-Olympic weight classes on July 21 at Tokyo’s National Training Center.

That came two weeks after the more high-profile wrestle-offs in the Olympic weights on July 6, when Asian champion Yuki Irie knocked off two-time world champion Yui SUSAKI at 50kg to make the team to the Kazakh capital of Nur-Sultan. 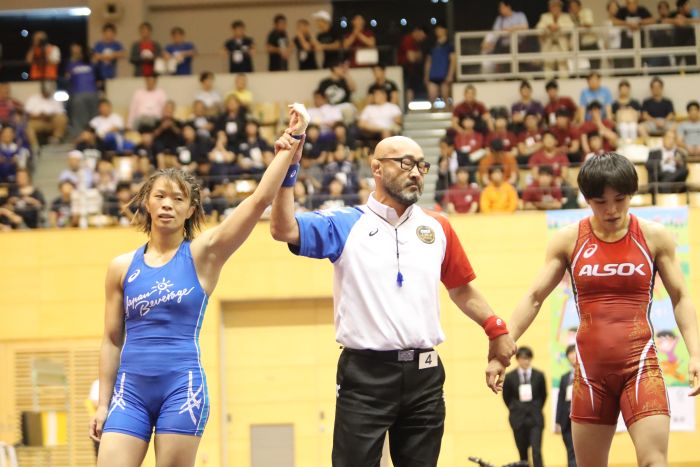 On that day, Risako KAWAI scored a 6-4 victory over Kaori ICHO at 57kg in a battle of Olympic champions that drew nationwide attention and was nationally televised. That loss dealt a serious blow to Icho’s bid to win an unprecedented fifth straight Olympic gold at the 2020 Tokyo Games.

Mayu MUKAIDA, the world champion in the women’s 55kg class, moved down to the Olympic weight of 53kg and earned that berth outright with victories at both of the national qualifying tournaments, the All-Japan Championships (Emperor’s Cup) in December and All-Japan Invitational (Meiji Cup) in June.

That led both Okuno and Nanami Irie to challenge for the spot at 55kg. In the playoff, both beat the third entrant at that weight, world junior and U-23 champion Saki IGARASHI, before meeting in the final match of the round-robin.

Irie, who had lost to Okuno in the semifinals of the Meiji Cup and also the previous year, scored an early takedown off a counter of a single-leg attack and held on for the victory to earn her first place at a senior world championships.

“In the match the other day, I was too impatient and gave up a bunch of points early,” Irie said. “She has a good feint, and I was prepared not to fall for it. I kept in mind keeping my stance and to keep moving. I had an image of her going for a single-leg takedown and how I would stop it.”

Irie said that had sister Yuki not won her showdown with Susaki, she never would have tried to make the team at 55kg.

“I thought, I have to fight hard, too,” Irie said. “I wanted to win here and go to the world championships with my sister. That’s all I thought about.” 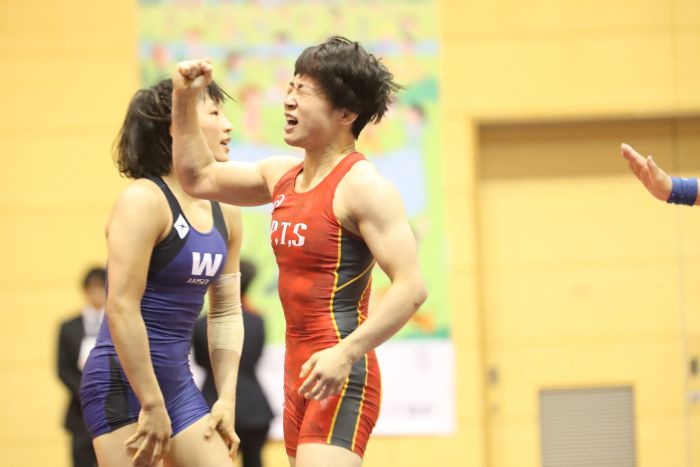 With the Japan federation-set criteria that winning a medal at the World Championships brings with it an automatic place at the 2020 Tokyo Olympics, the scramble into the Olympic-weight classes was frantic and the competition intense.

Wrestlers who finished second at either the Emperor’s Cup or Meiji Cup in an Olympic weight class had the option of entering the playoffs in a non-Olympic weight. Among those who passed were Icho and Atsushi MATSUMOTO, a world bronze medalist at freestyle 92kg.

Having missed out at her preferred 53kg, Okuno said her motivation was not very high in trying to make the world team at 55kg, the weight class in which she won a world title in 2017. In fact, she only made the final decision to take part the previous day.

“I had no intention of entering, I didn’t want to enter,” Okuno said. “Thinking I might want to do it at the last minute, my coach said I should just go ahead and submit the entry form. It was only yesterday that I decided to take part. Once I decided, mentally I was able to turn the switch back on and prepare for the match.”

However, it was not enough to overcome a determined Irie, the middle of the three wrestling sisters.

Another high-profile wrestler who missed out in his Olympic weight class and used the second chance to qualify in another division was 2016 Rio Olympic silver medalist Shinobu OTA.

Ota lost out to longtime nemesis and 2017 world champion Kenichiro FUMITA in the battle for the Greco 60kg berth. With his Olympic fate in Fumita’s hands, Ota saw moving up to 63kg as a way to stay ready should Fumita falter at the Kazakh worlds and reopen the door to Tokyo 2020 qualifying.

“I thought it over from many angles,” Ota said. “Whatever happens, when it comes to the Olympics, all I can do is wait for a result that’s favorable to me. But I can’t just wait around. To aim for the world title at 63kg is just staying prepared for what happens in the process for the Tokyo Olympics. I believed this was the best approach.” 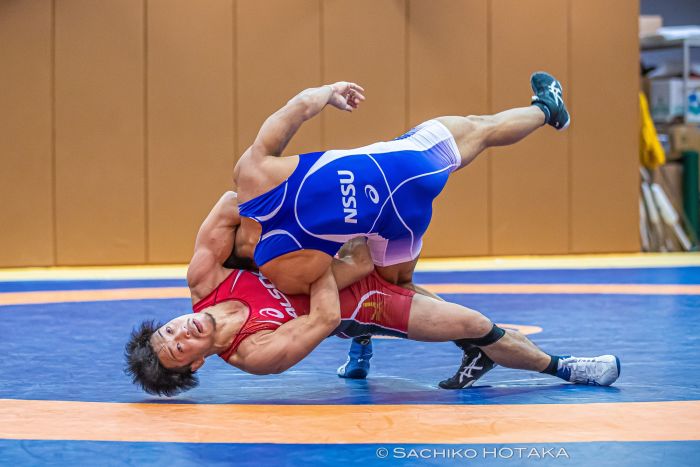 Standing in his way was Meiji champ Yoshiki YAMADA, with whom he has practiced as they are current and past products of Nippon Sport Science University. Ota, however, showed his power and technique in storming to an 11-0 technical fall over his younger foe.

Leading 3-0, Ota ended the match in his first chance at top in the par-terre position. He used his trademark front headlock to score two quick rolls, then, needing just one point to finish it off, scored with a big 4-point throw for the victory in 1:58.

The 25-year-old Ota had success earlier this year at 63kg, winning the Hungarian Grand Prix and finishing second at the Dan Kolov-Nikola Petrov tournament. He is entered in the upcoming Oleg Karavaev Memorial in Belarus, where the 63kg entries include the Asian gold and silver medalists as well as the Asian champion at 60kg.

Meanwhile, Yudai TAKAHASHI, fresh off a gold-medal run at the Asian Cadet Championships, won a 5-4 thriller over Yuta ABE in the freestyle 79kg playoff, making him the first male high schooler to make a Japanese national team to a senior world championships in 30 years.

“It hasn’t really sunk in yet,” said Takahashi, who competes for Kyoto powerhouse Amino High School. “But to be able to compete, I’m very grateful and I will work hard leading up to the world championships.”

With his victory, Takahashi avenged a loss by technical fall to Abe at the Emperor’s Cup. 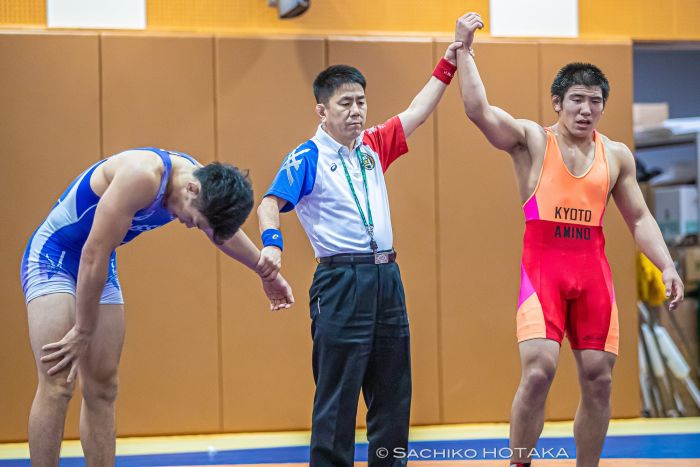 Another high schooler who made the team was Asian senior champion Yuzuka INAGAKI, who edged Yumeka TANABE 4-4 for the women’s 59kg spot.

Inagaki, the Emperor’s Cup champion, had attempted to qualify at 62kg at the Meiji Cup, but lost in the final to world silver medalist Yukako KAWAI, who secured the berth with that victory.

After failing to dislodge world champion Takuto OTOGURO (who would need a playoff win over Rei HIGUCHI to secure the spot) at 65kg, Takatani took a shot at 70kg. But his attempts to counter-roll on Shiga’s double-leg tackles were quashed several times as Shiga rallied from a 6-4 deficit.

“I could feel that he [Takatani] had changed weight class,” Takushoku University’s Shiga said. “I was cutting 5 kgs myself, so I felt the difference in body size, that I was bigger.”

In the other freestyle playoff, Kaiki YAMAGUCHI, having lost out at 57kg to 2017 world champion Yuki TAKAHASHI, successfully grabbed the 61kg slot with 3-1 and 7-4 victories, respectively, over Yo NAKATA and Yudai FUJITA.

Against Fujita, Yamaguchi trailed 4-1 when he scored a takedown, then went ahead with a takedown to an exposure in a 4-point combination.

Rio Olympian Tomohiro INOUE earned a trip to the world championships for the second year in a row at Greco 72kg when he defeated teenager Nao KUSAKU 5-1.

Inoue, who finished fifth at Rio 2016 at 66kg, had won the title at the Emperor’s Cup, but was dealt a stunning technical fall loss by Kusaku in the Meiji Cup final.

The other Greco places up for grabs went to Shota OGAWA, the Meiji Cup winner who defeated Emperor’s Cup champion and Asian silver medalist Hiromu KATAGIRI by 8-0 technical fall at 55kg; and Yuya OKAJIMA, a winner by fall at 82kg over Naotsugu SHOJI.

Shoji had lost the playoff in the Olympic weight of 77kg to Shohei YABIKU.

Masako FURUICHI, a two-time former world junior champion, captured the women’s 72kg berth by beating Mei SHINDO by fall, then edging Yasuha MATSUYUKI 3-2 with a takedown in the final 10 seconds.

Furuichi had tried to grab the spot at 68kg, which eventually went to Olympic and world champion Sara DOSHO, while Matsuyuki had come the other way, falling short of ousting two-time world bronze medalist Hiroe MINAGAWA at 76kg.

At 65kg, Emperor’s Cup champion Naomi RUIKE came away with a razor-thin 3-2 victory over Meiji Cup winner Misuzu ENOMOTO and a knee injury that had her limping off the mat in triumph.

Ruike was nursing her 1-point lead when Enomoto appeared to score a takedown in the dying seconds, during which Ruike injured her knee. But. as Ruike was receiving treatment, the takedown was nullified upon review.

Ruike, the Asian silver medalist, had skipped the Meiji Cup due to a hand injury. 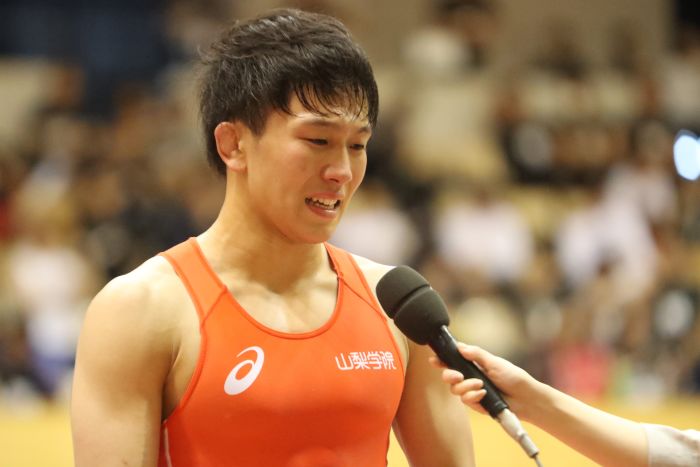