Starting off the Olympic year 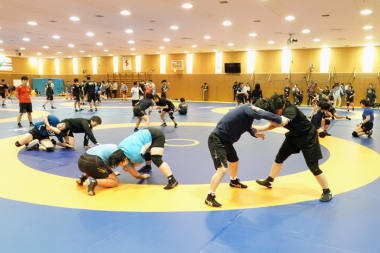 The national team in all three styles started the new year with a joint training camp.

Japan wrestling hit the ground running to start the Olympic year with a training camp from Dec 31 to Jan. 2 at the Ajinomoto National Training Center in Tokyo. Ringing in the new year on the mat were those who have already secured spots at the Tokyo 2020 Olympics, along with the first- and second-place finishers at the All-Japan Championships held Dec. 19-22. The camp included wrestlers in all three styles with the aim of achieving solidarity in the national team.

The six wrestlers who have already clinched places on Japan’s team for the Tokyo 2020 Olympics were among the national team squad of 30 named for the Asian Championships to be held Feb. 18-23 in New Delhi, India. Heading the squad will be Olympic team members Kenichiro FUMITA (Greco-Roman 60kg) and Takuto OTOGURO (freestyle 65kg) among the men and Mayu MUKAIDA (53kg), Risako KAWAI (57kg), Yukako KAWAI (62kg) and Hiroe MINAGAWA (76kg) among the women. 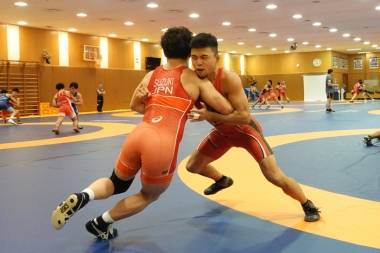 Greco-Roman world champion Kenichiro Fumita is among the entries for the upcoming Asian Championships.

In general, the other weight classes were filled by the gold medalists at the All-Japan Championships in December. In weight classes in which Japan will have an entry at the Asian Olympic Qualifying Tournament (currently scheduled for Xi’an, China, March 27-29), the national champion will be dispatched to that event and either the silver medalist or a bronze medalist will compete in India instead. Among those team members is former world champion Yuki TAKAHASHI at freestyle 57kg.

In three weight classes, the national champion is scheduled to participate in both tournaments–Tetsuya TANAKA (125kg) in freestyle and Yuta NARA (97kg) and Arata SONODA (130kg) in Greco-Roman.

The full list of entries for the Asian Championships is as follows: 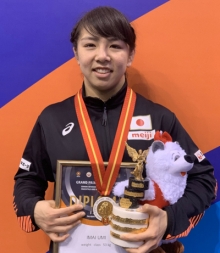 Japan dispatched a young team to the Ivan Yariguin Grand Prix held in Krasnoyarsk, Russia, on Jan. 23-26, and came away with one champion in the women’s tournament. Umi IMAI won the 53kg title, defeating 2019 bronze medalist and world team member Sumiya ERDENECHIMEG (MGL) 7-2 in the final.

An elite team of junior and senior high schoolers competed at the Klippan Lady Open in Klippan, Sweden, on Jan. 17-19 and showed the dominance of Japanese women on both the cadet and senior levels. 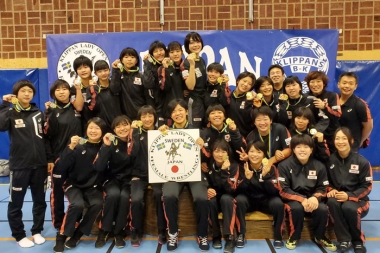 Sakurai’s run to the title was particularly impressive, as she defeated local star and four-time Olympian Sofia MATTSON (SWE) twice, 5-4 in the group stage and 4-2 in the final. With the exception of Kagami, the victories by the other four came in their first international senior tournaments.

All 14 members of the Japan cadet team came away with a medal, with eight taking home golds. Yu SAKAMOTO (49kg), Akari FUJINAMI (53kg) and Nonoka OZAKI (61kg) all won their third consecutive titles, while Miu OBATA (40kg) won for the second year in a row.

Only one of the 14 members lost to a non-Japanese opponent. Three of the finals were all-Japanese affairs.