Takuto OTOGURO got his bid for a gold medal at the Tokyo Olympics back on track with a confidence-boosting triumph at the Asian Championships in New Delhi, while world champions Kenichiro FUMITA and Risako KAWAI both won titles to all but secure the top seed in their respective weight class at Tokyo 2020. 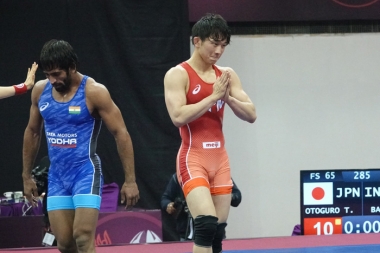 Japan came away with eight gold medals overall–one in Greco, five in women’s wrestling and two in freestyle–from the tournament held Feb. 18 to 23, and which allocated points for the UWW rankings that will determine seeds for the Tokyo Olympics. In total, Japanese wrestlers took home 16 medals.

The women won the team title with 209 points, 29 ahead of second-place India, while the freestyle squad placed fourth with 140 points, just six points behind third-place Kazakhstan. The Greco team was seventh with 98 points. Iran won both the freestyle and Greco titles.

Otoguro, coming off a disappointing fifth-place finish at the 2019 World Championships last September in Nur-Sultan, dominated local rival and defending champion Bajrang PUNIA (IND) 10-2 in the freestyle 65kg final to win his first continental title since capturing the Asian cadet crown in 2014.

“Last year, I feel like I was only losing and I went through various experiences,” the 21-year-old Otoguro said. “From now, this is an Olympic year, and I feel I’ve gained some momentum. But I still have room to improve. How strong I can get from here, I’m also looking forward to finding out.”

The final was a rematch of the thrilling gold-medal match from the 2018 World Championships, which Otoguro won 16-9 to become Japan’s youngest-ever male world champion. That clash was named the match of the year by UWW.

Punia was a bronze medalist last year in Nur-Sultan, but before Otoguro could get a shot at him, he first had to get past world silver medalist and 2018 Asian champion Daulet NIYAZBEKOV (KAZ). Facing off in the quarterfinals, Otoguro trailed 3-2 when he started reeling off takedowns and came away with a 10-3 victory. An 11-1 technical fall of Nyamdorj BATTULGA (MGL) in the semifinals set up the showdown with Punia.

In the final, Punia had no answer for Otoguro’s low-single attacks and counters, as the Japanese put the match away with seven unanswered points in the second period. 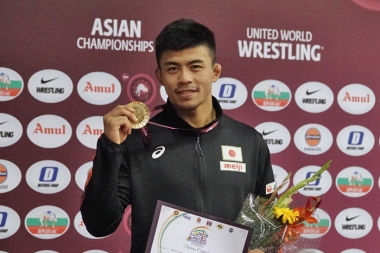 Meanwhile, Fumita scored points off a counter to an arm throw attempt by world U-23 silver medalist Zholaman SHARSHENBEKOV (KGZ) and went on to notch a 4-0 victory in the Greco-Roman 60kg final.

Combined with his victory at the World Championships, Fumita assured he would finish at the top of the rankings going into the Tokyo Olympics by capturing his second Asian title and first since 2017, which he also won in New Dehli. Last year in Xi’an, China, he lost in the semifinals and had to settle for a bronze medal.

“It’s an honor,” Fumita said of being the top seed. “It’s a rare thing, as there have hardly been any Japanese No. 1 going the into Olympics. For me, with No. 1 seed comes responsibility, but I will work hard to be worthy of it.”

At Tokyo 2020, Fumita will aim to become Japan’s first Olympic gold medalist in Greco-Roman since Atsuji Miyahara won the 52kg gold at the 1984 Los Angeles Games.

“That was more than 10 years before I was born, so it’s not something I actually have a sense of,” Fumita said. “It’s sad that there hasn’t been a Japanese Greco champion in all that time. For me, I want to get [a gold] and help make Greco more popular.”

No other Greco wrestlers won medals in New Delhi.

Due to the circumstances related to the novel coronavirus outbreak, three countries—China, North Korea and Turkmenistan—withdrew from the tournament. That had the biggest effect on the women’s tournament, as China and North Korea had a combined five champions and three runner-ups in 2019, and several of those wrestlers were among the preliminary entries this year. 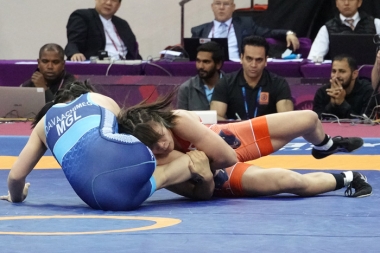 For Rio Olympic champion Kawai, that meant her rematch of the 2019 world final at 57kg against RONG Ningning (CHN) was put on hold for now. With little competition, the three-time world champion secured her fourth career Asian gold and first since 2017 by overwhelming Davaachimeg ERKHEMBAYAR (MGL) in the final by 10-0 technical fall.

Kawai used an arm drag to a single leg takedown, then secured a lace lock and ripped off four unencumbered rolls to win in 1:37.

“I was hoping to face the Chinese and North Koreans before the Olympics, and try out different techniques,” Kawai said. “But when it comes to matches, things don’t always go as you want. When I get home, I will work on fine-tuning.”

With one ranking series event remaining in Poland in June, Kawai could possibly be passed in the rankings by African champion Odunayo ADEKUOROYE (NGR), but will drop no further than second.

As she waited for her medal ceremony, Kawai was able to watch younger sister Yukako join her as an Asian gold medalist with a 5-1 victory over Ayaulym KASSYMOVA (KAZ) in the 62kg final. It marked the first time the sisters had won senior international golds together—a milestone they hope to repeat at Tokyo 2020. 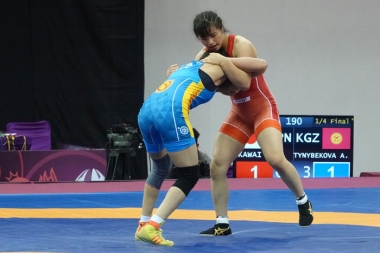 Yukako Kawai, in winning her first senior Asian title, had to get over her toughest hurdle earlier in the day in her opening match, when she snatched a victory from the jaws of defeat over world champion Aisuluu TYNYBEKOVA (KGZ) match in the quarterfinals.

Kawai, a world bronze medalist, had lost twice to Tynybekova in 2019—in the Asian final, and again in the second round at the World Championships. This time, Tynybekova was leading on last-point criteria when Kawai uncorked a dramatic last-second lateral drop at the edge of the mat that sent Tynybekova to her back. An unsuccessful challenge resulted in a final score of 4-1.

“I was aware of the time, and if I was going to lose anyway, I thought I have to just give something a shot,” Kawai said. “It was all or nothing.”

Kawai regards the victory as giving her a psychological edge going into the Tokyo 2020 Olympics.

“She’s an opponent whom I have never beaten, so I wanted to beat her once going into the Olympics,” Kawai said.

The Japanese women were not immune from being on the short end of surprises themselves. Just ask Mayu MUKAIDA, who was on the verge of completing a technical fall in the 53kg final when her world was suddenly turned upside down.

Mukaida, the 2019 world silver medalist, had exploded to an 8-0 lead over Tatyana AKHMETOVA AMANZHOL (KAZ) and was in the process of finishing her off with a gut wrench. But midway through the roll, Akhmetova Amanzhol managed to loosen the grip and step over Mukaida, who was stopped firmly on her back. The 34-year-old mother of two only needed to clamp down to end the match by fall at 1:48. 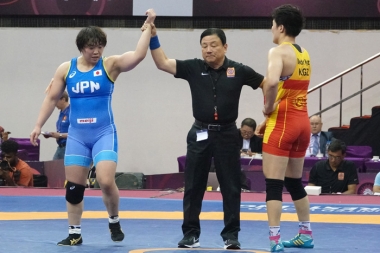 Japan’s other women’s champions were Miho IGARASHI at 50kg, Naomi RUIKE at 65kg and world silver medalist Hiroe MINAGAWA at 76kg. In addition to Mukaida, silver medals were taken home by Naruha MATSUYUKI at 68kg and Mei SHINDO at 72kg.

Igarashi, a two-time world champion at both the junior and U-23 levels, made the most of her senior national team debut in one of Japan’s deepest weight classes, holding on for a 3-2 victory over Devi NIRMALA (IND) in the 50kg final.

Igarashi was third at the Japan Championships, but received the ticket to New Delhi as champion Yui SUSAKI is headed to the Asian Olympic qualifying tournament and runner-up Yuki IRIE opted out.

“I thought, I can’t wrestle poorly or lose easily,” Igarashi said. “There was some pressure, but in the end, I had a good result.”

With the victory, Igarashi matched younger sister Saki, who won the 2018 Asian title at 55kg.

Ruike improved on her silver medal from 2019 when she scored a spin-behind takedown in the first period, which held up for a 2-0 win in the final over two-time bronze medalist Sakshi MALIK (IND).

The two had faced each other earlier in the day in the group stage, with Ruike notching a 2-1 win in which all points were scored on the activity clock.

Minagawa also beat the same opponent twice, the second one a 4-1 victory in the 76kg final over world U-23 bronze medalist Aiperi MEDET KYZY (KGZ) that gave Minagawa her third Asian gold and first since 2015. Earlier in the day, she beat Medet Kyzy 3-0.

Matsuyuki, a world junior champion, finished second in a five-women round-robin behind Divya KAKRAN (IND), while world U-23 bronze medalist Shindo lost 2-1 in the 72kg final to Zhamila BAKBERGENOVA (KAZ), a bronze medalist in 2019.

Led by Otoguro, half of the freestyle team was made up of current or former wrestlers for collegiate powerhouse Yamanashi Gakuin University. And those five had quite a tournament, coming away with two golds, a silver and two bronzes.

Put another way: Had Yamanashi Gakuin been regarded as a separate team, it would have finished sixth in the standings with 100 points.

The biggest surprise came at 86kg, in which Yamanashi’s unheralded Shutaro YAMADA (JPN) uncorked a pair of 4-point throws and held on to defeat 2019 Asian U-23 champion Ahmad BAZRIGHALEH (IRI) 10-10 on big-point criteria.

Yamada was third at the Japan Championships, but got the chance to make his international senior debut as national champ Sosuke TAKATANI will enter the Asian Olympic qualifying tournament.

“The chance came to me and to be honest, I thought I wouldn’t win a medal, much less the championship,” said Yamada. “To get the gold, I’m extremely happy.”

It was quite an eventful day for Yamada, who knocked off local star and world silver medalist Deepak PUNIA (IND) in the semifinals.

Yamanashi teammate Takuma OTSU also advanced to a final, but was overwhelmed at 92kg by Mohammadjavad EBRAHIMIZIVLAEI (IRI), who stormed to an 11-0 technical fall.

“We expected at least third places from the lower weights,” Yamanashi coach Kunihiko OBATA said. “The guys in the upper weights far exceeded our expectations. It’s a good experience and gives them confidence.”

Takatani, the silver medalist at both the 2018 Asian Games and Asian Championships at 65kg, was making his international debut at the next Olympic weight of 74kg. After failing to dislodge Otoguro at 65kg, he moved up two weight classes to 74kg, but lost in the final at the Japan Championships to Otoguro’s older brother Keisuke.

With his win, Keisuke Otoguro earned a place in the March 8 playoff for Japan’s Olympic berth at 74kg against Okui’s older brother Mao, who secured the spot for Japan by placing fifth at the World Championships.