It would still be weeks before the announcement that the Tokyo Olympics would be postponed, when there was still speculation the Games could even be canceled. For Sara DOSHO and Keisuke OTOGURO, the only aspect of the matter over which they had any control was what they did on the mat.

Staying focusd on the task at hand, the took care of business and assured their places on Japan’s Olympic team with victories in special playoffs on March 8 at Tokyo’s Ajinomoto National Training Center. 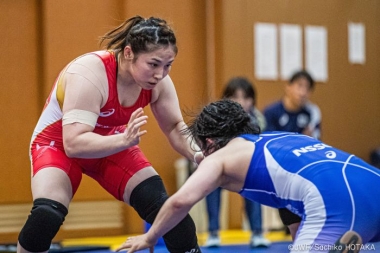 Rio Olympic champion Dosho assured she would be able to defend the women’s 68kg gold medal that she won four years ago by defeating world junior champion Miwa MORIKAWA, 3-1, avenging a loss to the collegian in the semifinals of last December’s All-Japan Championships that had resulted in the playoff.

Otoguro made Tokyo 2020 a family affair, defeating Mao OKUI, 5-2, in the freestyle 74kg playoff to join younger brother Takuto (65kg) on the Olympic squad. Okui had earned the Olympic berth by placing fifth at the World Championships in Nur-Sultan in September, but Keisuke Otoguro won the All-Japan title to set up the playoff.

Like Okui, Dosho had secured a berth for Japan when she placed fifth at the World Championships in the Kazakhstan capital. Had she won a medal, she would have gained the Olympic spot outright; instead, she had to earn it in the playoff with the All-Japan winner, which turned out to be Morikawa. For Dosho, the victory in the playoff marked a major step in her recovery from shoulder surgery that had sidelined her for much of 2018 and kept her from being able to defend her world title from the previous year. On top of that, she was also hampered by a knee injury suffered in January.

“I had a lot of injuries, but I was able to come back and be here today,” Dosho said. “I want to be completely healthy for the Tokyo Olympics and wrestle at a high level. From the time I won in Rio, my aim was to win again in Tokyo. That has not changed. I’ll do what I can to make that happen.”

The two matches were held behind close doors as a countermeasure for the spread of the coronavirus, with only the wrestlers’ coaches and federation officials allowed in the wrestling room. Family members were excluded, and the media had to watch a livestream feed in the press room of the soccer stadium in the training center complex.

Dosho has been admittedly hesistant to go on the attack since suffering the shoulder injury at the 2018 Women’s World Cup, and it showed in the clash with Morikawa. Morikawa, a student at Nippon Sports Science University, had lost three times to Dosho while still a high schooler—all by technical falls—but was a much-improved and matured version when she upended the Olympic champion 9-2 at the All-Japan tournament.

After a sedate first period, in which Dosho scored the lone point from the activity clock, she padded her lead early in the second, countering a single-leg attempt by Morikawa to work behind for 2 points.

“My main weapon is my tackle, but in my head, I was hesitant to launch attacks,” Dosho said. “The way the match went, it turned out to be a good thing. I can’t say it went as a I planned because I didn’t get any tackles, but I worked in practice on putting pressure on the opponent and using counters, and that went well.”

Morikawa, who is coached by four-time Olympic champion Kaori ICHO and 2008 Olympic silver medalist Kenichi YUMOTO, kept up the attack, and it nearly paid off. She launched a driving double-leg tackle that forced Dosho backward, but was only able to gain a 1-point stepout for the effort that left her short.

Interestingly, Dosho had in her corner as coaches Eri TOSAKA and Risako KAWAI, fellow products of powerhouse Shigakkan University. With Dosho on the mat and Icho in the other corner, it meant that all four of Japan’s gold medalists in women’s wrestling at the 2016 Rio Olympics were involved in the match. 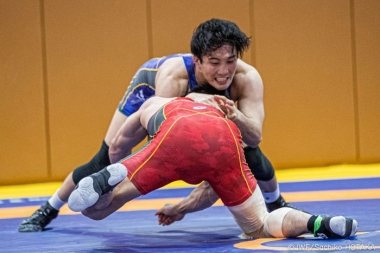 As with the women’s match to follow, the clash between Otoguro and Okui—who are teammates at the Self-Defense Forces Physical Training School—featured little action in the first period, and the only scoring was an activity clock point awarded to Otoguro.

Okui, who was hampered by a severe knee injury suffered a month ago, went on the attack in the second period. But he was halted on a fireman’s carry attempt, and Otoguro was able to spin behind for a takedown. From the ground position, Otoguro pinned one of Okui’s leg behind him, then gained an arm and body lock that allowed him to lever him over for an eventual roll and a 5-0 lead.

“I thought I could turn him,” Otoguro said. “Before the match, I met my father, who wasn’t allowed into the match, at the entrance. He said to me that I would probably be able to use that move. Even though he just kind of mentioned it off hand, that was in my head as I fought. I got in that position and I was able to turn him.

“I might have used a different move and it might have changed the outcome of the match. I’m glad we had that chat.”

Okui closed the gap with a single-leg takedown in the final minute, but Otoguro held off later attempts to clinch the win.

The victory allowed Otoguro to momentarily move out of the shadow of younger brother Takuto, who burst onto the scene in 2018 when, at age 19 years 10 months, he became the youngest male world champion in Japanese wrestling history. Takuto finished fifth at the 2019 worlds at 65kg, then clinched his ticket to the Tokyo Olympics by winning the All-Japan title.

“I don’t usually say this in front of people,” Keisuke said, “It’s been frustrating (up to now). It’s always about Takuto. He became ‘that SOB’ and it was eating away at me.” 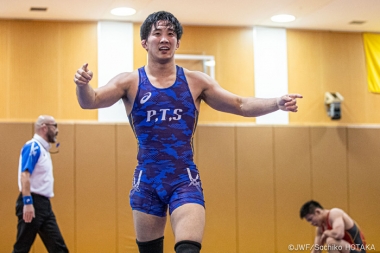 The Otoguros will become the first brothers to compete at the same Olympics for Japan since Yumoto and his twin brother Shinichi made the squad for the 2012 London Olympics. Shinichi joined Kenichi as an Olympic medalist at those Games with a bronze at 55kg. Japan will also have a female sibling combination at Tokyo 2020 with Risako and Yukako Kawai.

“Since we were young, we’ve had a dream of winning the Olympics together,” Otoguro said. “The Yumoto brothers both won Olympic medals, didn’t they? The Otoguro brothers will aim to surpass that and both win golds.”

Otoguro, who had won national titles at 61kg in 2015 and 70kg in 2017, moved up to the Olympic weight of 74kg last year. It didn’t go so well at first. In the second qualifying tournament for the World Championships, the All-Japan Invitational Championships (Meiji Cup), he lost in the first round. The unheralded Okui won that tournament and earned the ticket to Nur-Sultan, then pulled a surprise by making it to the semifinals and clinching the Olympic spot.

But Otoguro was not discouraged, and came back the following December to win the Emperor’s Cup and set up the playoff with Okui.

Otoguro said it was awkward preparing for the big match against an opponent who lives next door in the dormitory and practices in the same wrestling room, even though the two had their own training regimens.

“We practice in the same place and our [dormitory] rooms are next to each other, so it made it difficult,” Otoguro said. “But we were able to stay separate and keep our focus, as you need to do when everything is on the line. The coaches allowed us to put together a training schedule that best fits us. We prepared separately for this match in our own way.”

Okui suffered an anterior cruciate ligament injury that will likely require surgery, but said that was not the cause of his defeat. “I decided that I would wrestle, and I don’t want to use that as an excuse,” he said. “I thought I had to win however I can, but midway through, I panicked a bit and that led to this result. If I had stayed calmer…”

In line with the havoc that the spread of the coronavirus has wreaked on the sports world, the following tournaments in Japan were canceled:

In addition, the national team training camps held in March were scaled down, with fewer wrestlers taking part. The Greco-Roman team had two camps, while the freestyle and women’s teams had one each.

With the Tokyo Olympics postponed and the pandemic continuing to spread, the schedule for April is undecided.

Deaf wrestling to start in Japan

A movement has taken hold to start deaf wrestling, which has a world history of over a half-century but had not been implemented in Japan.

The Deaflympics is a multisports event held every four years on a global scale for hearing impaired athletes. Organized by the International Committee of Sports for the Deaf, there are summer and winter editions. The first Summer Deaflympics was held in Paris in 1924, and the first Winter version held in Seefeld, Austria, in 1949. 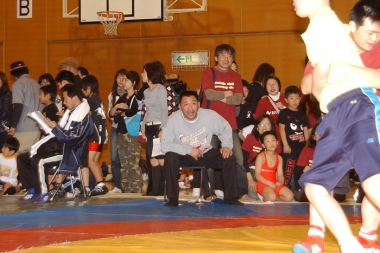 Wrestling was included on the Summer Deaflympics program from the 1961 event in Helsinki, with competition in freestyle and Greco-Roman. At the most recent Deaflympics, in 2017 in Samsun, Turkey, wrestling drew 88 entries from 19 countries and Greco 38 from 9 countries. United World Wrestling sanctions a number of deaf wrestling competitions worldwide.

Hase, who represented Japan at Greco-Roman 90kg in the 1984 Los Angeles Olympics and later became a popular figure on the pro wrestling circuit, is currently a lower house member of the Diet, Japan’s parliament. Besides that, he is general secretary of that Parliamentary Association for the Promotion of the Deaflympics in Japan. There was no reason to refuse.

“Within the Japan Wrestling Federation are various bodies, including the Japan Martial Arts Games Association, and general, college and high school (federations),” Hase said. “I want this to be established as one such field.”

In response to the call, Waseda University head coach Takuya OTA started a wrestling club for deaf wrestling, and is currently instructing three students. Ota, a freestyle bronze medalist at the 1996 Atlanta Olympics, had previously set up a similar club for children with Down’s Syndrome and autism.