Starting to see the light?

The month started out with more cancellations of tournaments in line with the government’s declaration of a state of emergency in response to the coronavirus outbreak. By May 6, it was announced that the following tournaments would not be held:

As the state of emergency did not initially result in the anticipated decrease in the rate of new infections, it was extended. But as progress was made, on May 14 it was lifted in a large number of prefectures across the country, mainly outside of large metropolitan areas. On May 25, Metropolitan Tokyo and its neighboring prefectures were added to complete the lifting of the state of emergency in the entire country.

For sports and other aspects of society to return to normal will surely take some time. But teams have already started preparing for the long-awaited restart of practice.

The latter is one of the biggest tournaments in Japan in terms of number of participants, as colleges are allowed multiple entries per weight class, including an unlimited number of juniors and seniors. It is not unusual for the middle weight classes to draw fields of over 100 wrestlers.

World silver medalist Hiroe MINAGAWA, who has already secured a women’s 76kg place at the Tokyo Olympics, recently took time for an interview in which she opened up about her life during the crisis, and how her experience of missing out on the previous Olympics is helping her cope with the delay for this one. 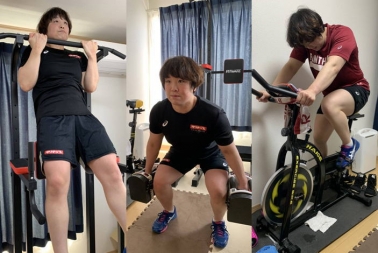 Heading into the 2016 Rio de Janeiro Olympics, Minagawa — competing at the time under her maiden name of SUZUKI — was going strong and seemed to be a shoo-in to make the field at 75kg. But a major injury just prior to the qualifying tournament the previous year knocked her out of the running to appear at a first Olympics.

Minagawa considered retiring, and planned to make her farewell at the 2017 World Championships in paris. But when she fought back in the repechage and took home a bronze medal, it inspired her to forge on. Her second-place finish at last year’s World Championships in Nur-Sultan clinched her place at the Tokyo 2020.

Then the new coronavirus started spreading around the world, putting sports on hold and causing the Tokyo Games to be postponed for a year. Once more, Minagawa’s spirit and resolve would be put to the test.

“I was really heartbroken before Rio,” Minagawa said. “But this time, the reason I am facing another trial is different. This time, because of my Rio experience, I’m not allowing myself to unnecessarily to get down mentally.”

The 32-year-old Minagawa, who uses Tokyo’s Jiyugaoka Gakuin High School as her training base, had to halt practice in mid-March. She could only work out at home and, concerned about the coronavirus, only went outside for trips to the market. “Even just a slight headache made me wonder, ‘Is this the coronavirus?’ Just to be safe, I took a shower as soon as I came back from shopping and put my clothes in the washer.”

She had a physical trainer create a rigorous workout menu, split into morning and afternoon sessions of three hours each. “I’ve been eating plenty, but with this workout, I haven’t gained any weight,” she said.

When she can get back onto the mat for full-fledged practice remains uncertain.

“Of course, I want to wrestle,” she said. “But right now I’m afraid of getting infected or maybe infecting others. I want to start wrestling when everything is alright around the world.”

Yoshida was included among the Top Wrestlers of the 2000s, the decade that saw the inclusion of women’s wrestling on the Olympic program for the first time. The website lauded Yoshida, saying she “reached legendary status in women’s wrestling during the 2000s after an undefeated run in major championships between 2002 and 2016.” It noted her Olympic golds in Athens in 2004 and Beijing in 2008.

Yoshida was the only woman among the five wrestlers named, three of whom are Russians.

Icho earned a place on the Top Wrestlers of the 2010s for “one of the most dominant runs ever in international wrestling” from 2003 to 2016. Icho captured the last two of her unprecedented four Olympic gold medals in the decade, at London in 2012 and Rio de Janeiro in 2016.

Icho was one of 10 wrestlers named, along with Abdulrashid SADULAEV (RUS), Jordan BURROUGHS (USA) and Mijain LOPEZ (CUB).