On June 5, the executive board of the Japan federation held a meeting in Tokyo. In light of the postponement of the Tokyo Olympics for one year to 2021, a proposal was approved that the eight wrestlers (three men, five women) who had qualified for the Games as of March would keep their places on the Olympic team. 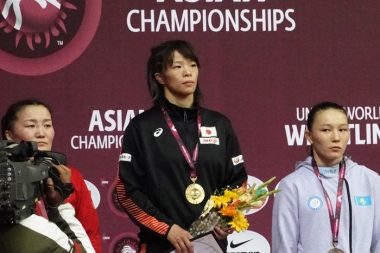 World champion Risako KAWAI is one of eight Japanese wrestlers who had already qualified for the Tokyo Olympics whose places were confirmed by the Japan federation.

After the Olympics were officially postponed, the technical development committee advocated that the status of the wrestlers be maintained and made the proposal at the board meeting. The measure was passed after deliberations.

At the same time, it was also decided to maintain the system used prior to the postponement for deciding which wrestlers in the 10 remaining weight classes will be sent to the Asian Olympic qualifying tournament, which was postponed to March 2021 and is planned to be held in China, and the final world qualifying tournament, scheduled for the next month in Bulgaria. Accordingly, the wrestlers who would have been dispatched to the Asian tournament in March of this year will take part in next year’s tournament.

For the All-Japan Championships (Emperor’s Cup) scheduled for December this year, wrestlers whose places at the Olympics or Olympic qualifier have already been decided will not lose those places by not participating. However, the federation will call on the wrestlers to take part.

By the end of May, the lifting of the state of emergency declared by the government was completed in all prefectures in the country. In June, a wide number of teams and clubs, from kids up to college, resumed practice. Because it was not possible to adequately prepare, the following tournaments scheduled for the summer were canceled.

In the case of the All-Japan Collegiate Championships, officials are discussing the feasibility of rescheduling it at a future time and, if necessary, different venue.

With these cancelations, all national-level tournaments through August have either been canceled or postponed. As there was nothing originally planned for September, the earliest that national-level competition will resume is October.

The Japan Sport Association, which organizes the National Sports Festival (an annual multisport event hosted by a different prefecture each year), has already announced that it had abandoned hope of holding this year’s event in Kagoshima, where wrestling was to be held Oct. 4-7. The Association is hoping to stage the festival next year.

For high school wrestlers, the National Sports Festival tournament is one of the major championships on the calendar. Wanting to avoid having the high schoolers miss out on the chance for a national title, the Japan federation is looking into scheduling substitute tournaments in October, tentatively in Niigata for boys and Shizuoka for girls, perhaps in conjuction with another scheduled event.

July will mark the return to the mats of the national teams in each style for separate training camps at the reopened Ajinomoto National Training Center in Tokyo. The women will be the first ones back, when their camp starts July 2.

The camps will follow guidelines to prevent the spread of the coronavirus established by the federation’s sports science and technical development committees. It is planned that all wrestlers participating in the camps will undergo antibody tests and other health measures, and the number of participants will be limited.