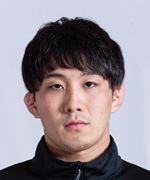 Keisuke OTOGURO, who moved up a weight class and won a playoff for the men’s freestyle 74kg spot at the Tokyo Olympics, is using the delay caused by the pandemic to bulk up and better handle the extra weight.

“My weight is still not stable,” Otoguro said in a recent interview. “First, I am focusing on gaining weight and crafting my body. The Olympics were postponed for a year, but I take it positively that it has given me more time to work on my issues.”

One doesn’t build the muscles and power for a higher weight class overnight. Time is necessary to fill in a 4-kilogram gap.

“In my case, I went up one weight class at a time from 61kg,” Otoguro said. “Up to now, I never really felt a difference in the weight classes. But in going from 70kg to 74kg, I can feel a slight difference in power and pressure. On the world level, I think the gap will be much higher, so I am practicing with those in higher weight classes.” 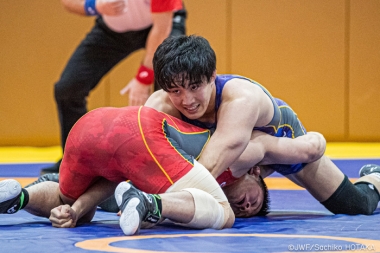 Keisuke OTOGURO went up a weight class and earned the Olympic spot at freestyle 74kg by winning a playoff in March. (Photo by Sachiko Hotaka)

Yumoto has been offering practical advice on how best to take on foreign opponents. “I know that strong athletes will appear at the Tokyo Olympics,” Otoguro said. “As we watch match videos, [Yumoto] will say, ‘This wrestler likes to attack this way.'”

Otoguro said that since the start of the coronavirus pandemic, he has met with younger brother and former world champion Takuto OTOGURO, a student at Yamanashi Gakuin University who has already earned a place at freestyle 65kg at the Tokyo Olympics, only a few times. But the brothers remain close.

“We occasionally catch up with each other by iphone chats, but we can’t practice together,” Keisuke said. “As for the postponement of the Olympics, I still have a lot to work on, so he told me, ‘Maybe it’s better it happened.'” 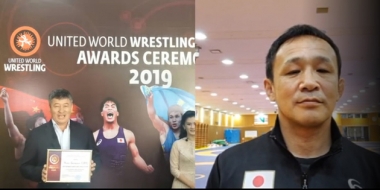 Shinobu OTA was named the best Greco-Roman wrestler in Asia and Japan women’s team director Hideo SASAYAMA the top women’s coach as UWW Asia announced its individual awards for 2019 on Aug. 12 in an online ceremony.

The two were “presented” their certificates and $3,000 prizes virtually by UWW Asia President Daulet TURLYKHANOV (KAZ).

It was the first time for the awards to be presented, which were established to promote unity and development of Asia. The awards ceremony was originally scheduled to take place in June during the Asian Junior Championships in Kyrgyzstan, but because of the global pandemic, that tournament was canceled and there were no other tournaments that could adequately serve as an alternate. Therefore, it was conducted online.

Last year, Ota won the 63kg gold medal at the World Championships, and won two of the three UWW Ranking Series tournaments that he entered, while finishing second in the other. He also was the runner-up as the UWW’s Wrestler of the Year in Greco-Roman.

Amid the continuing spread of coronavirus infections centered in Tokyo, a cluster emerged among the wrestling team at powerful Nippon Sports Science University, which has a number of national team members among current students and active alumni wrestlers who train with the squad.

The team, which practices at the university’s campus in Yokohama, revealed that two members became feverish on Aug. 10 and two days later tested positive for the coronovirus. Accordingly, testing was done on a total of 62 people on or involved with the team on Aug. 15. That resulted in 15 collegiate members in their teens or 20s, and three alumni in their 20s, being confirmed to be infected. Furthermore, on Aug. 21, an additional four students tested positive.

In all cases, the infected were asymptomatic or had mild symptoms. Current Greco-Roman world champion Kenichiro FUMITA, who trains in the wrestling room of his alma mater, tested negative.

Meanwhile, given the current situation, more tournaments have been added to the long list of cancellations:

•On Aug. 5, the All-Japan Women’s Open, scheduled for Oct. 17-18 in Akitsu, Shizuoka Prefecture, was canceled at the request of the prefectural government.

•On Aug. 23, it was decided that the All-Japan Shakaijin (non-student) Championships, to be held Oct. 24-25 in Fujimi, Saitama Prefecture, would also be canceled.

•On Aug. 31, the national collegiate championships, slated for Sept. 29 to Oct. 2 in Maebashi, Gunma Prefecture, was also canceled. The tournament had originally be scheduled for Aug. 25-28 in Nakatsugawa, Gifu Prefecture, but was postponed on June 16. In late July, the alternate venue and dates were decided.