The Japan wrestling world, which had been in a virtually standstill, is set to get back in action. Although the number of coronavirus infections in the country has yet to be reduced to zero, Japan has been gradually resuming economic activity and sporting events. There have been high school tournaments in individual prefectures, and the Kazama Cup National High School Invitiational Championships, set for Oct. 9-11 in the city of Niigata, will go ahead as scheduled. 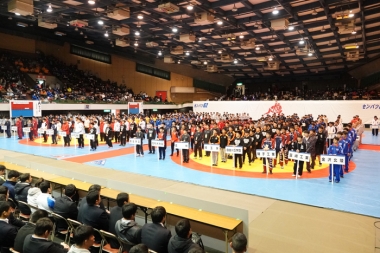 The Kazama Cup, originally scheduled for March and canceled at one point, will now be held in October.

The Kazama Cup was originally slated for March 27-29, and was even canceled at one point. But at the request of the Japan federation, which sought to give current high schoolers a goal to strive for, the Niigata Prefecture wrestling federation made efforts to hold the event. The postponed competition will draw the nation’s best high school wrestlers in both team and individual tournaments.

To prevent the spread of the coronavirus, the tournament will be held without spectators, and only the wrestlers and their coaches will be allowed in the arena. In lieu of that, all matches will be streamed live on the internet.

The tournament will be the first event sanctioned by the Japan federation or an affiliated federation since March 8, when the playoffs for several Tokyo Olympic berths were held at the Ajinomoto National Training Center in Tokyo. Since then, all national-level tournaments were either canceled or postponed, and this is the first to get the go-ahead since the All-Japan Boys and Girls Championships were held on Feb. 22-23 in Tokyo.

The collegiate wrestling scene is also getting back in gear. While the All-Japan Collegiate Championships, scheduled for Sept. 29-Oct. 2 in Maebashi, Gunma Prefecture, were canceled, the National Collegiate Greco-Roman Championships will proceed on Oct. 15-16 at Tokyo’s Komazawa Gym.

Collegiate tournaments had been canceled across the board, including those open to freshmen and sophomores such as the Junior Queens Cup and JOC Junior Olympics. So the Greco-Roman tournament will be the first one this year. Coronavirus countermeasures will be in place, such as the banning of spectators and the foregoing of opening and closing ceremonies to avoid crowded situations.

At an online meeting of the Japan federation’s board of directors, it was decided to pursue a plan for the Emperor’s Cup All-Japan Championships, tentatively set for December at Komazawa Gym, to be held even it if has to be scaled down, such as by reducing the number of entries per weight class. The fate of the tournament will be decided taking into consideration the pandemic situation at the time a final decision has to be made. 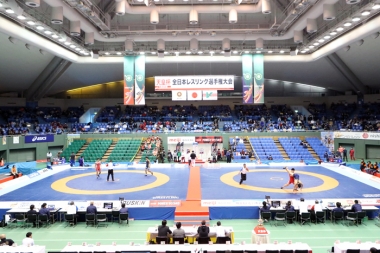 The All-Japan Championships is slated to go ahead in December, although it will likely be scaled down

In addition, the federation plans to dispatch teams to the world junior and senior championships, should they be held as scheduled in December in Serbia. Once the holding of the tournaments is confirmed, the technical committee will choose the team members as there will be insufficient time to hold qualifying events.

National team training camps, which were suspended in mid-July, will resume with the freestyle squad starting on Oct. 1. The Greco-Roman will follow starting Oct. 20, and the women a day after that. All will be held at the Ajinomoto National Training Center.

Conversely, the Tokyo Governor’s Cup National Junior High School Invitational Championships, scheduled for Nov. 11-13 at the Komazawa Indoor Ball Sports Field in Tokyo, was canceled. Also wiped out were the annual year-ending training camps at the NTS and five other locations for top high schoolers, and an elite kids’ camp which was to have been held in the winter early next year.

On Sept. 9, International Olympic Committee (IOC) President Thomas BACH expressed his strong desire and confidence in the Tokyo Olympics, a message received warmly in Japan which boosted the general mood that the Games will be held.

Yoshiro MORI, president of the Tokyo Olympic and Paralympic organizing committee, commented, “It is the first time in history that an Olympics and Paralympics has been postponed for a year, and it has presented difficulties that noone has ever had to face. All of the staff will pull together as one.”

Tokyo Gov. Yuriko KOIKE said, “Tokyo 2020 must overcome the hardships and become an event that shines a light of hope to the world.”

Currently, Japan bans the entry of visitors from 159 countries and regions in principle, but the government is easing the restrictions on business-related travelers from some countries. It will also ease restraints on tourists from some areas starting Oct. 1.

Heading into the Tokyo Olympics, the government plans to enact changes to allow the special entry of athletes from countries and regions that are currently on the banned list. The policy being considered is to allow in about 10,000 athletes from overseas who meet such criteria as providing proof of a negative coronavirus test and an itinerary of planned movement within Japan. There will an exemption from the two-week quarantine upon arrival in Japan, and the athletes will be allowed to prepare for participation in competition and training.