Japan will not send a team to the World Championships scheduled for December in Belgrade, citing safety for the wrestlers amid the global pandemic, the Japan Wrestling Federation announced on Oct. 30.

The federation noted the surge in coronavirus infections in Europe and the fact that the arena that will serve as the venue for the World Championships in the Serbian capital is currently being used as a makeshift hospital for covid-19 patients.

Japan, which won three gold medals and nine overall at the 2019 World Championships in Nur-Sultan, joins the United States in announcing it would skip this year’s tournament.

Japan, where coronavirus infections continue to spread but have been largely contained through nationwide adherence to countermeasures such as mask wearing, earlier this month resumed national-level competitions for the first time since February.

With the global calendar turned upside down by the pandemic, the World Championships were rescheduled for Dec. 12-20 in Belgrade. Unfortunately, that overlapped with the set dates of Dec. 17-20 for the All-Japan Championships. Most top wrestlers indicated that they would have opted to participate in the World Championships; now, that choice has been eliminated.

While there still seems no end in sight to the pandemic, society is getting back onto its feet. All over the Japan sports world, competition has resumed, and in pro sports, spectators are coming back to the arenas and stadiums. Japanese wrestling has begun to turn the corner as well. 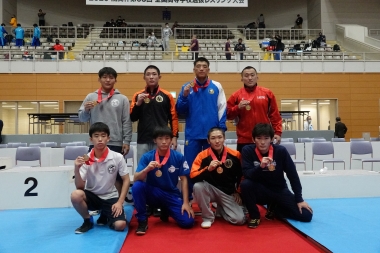 The eight gold medalists gather for a group photo

On Oct. 9-11, the Kazama Cup National High School Invitiational Championships was held in the city of Niigata. The three-day event at the Higashi General Sports Center consisted of both team and individual tournaments, drawing the top high schoolers from around the country. It became the first national-level tournament on any level since February.

Combining wrestlers, coaches and team officials, tournament staff and others, about 800 people had a hand in the tournament. Strict protocols to prevent the spread of the coronavirus were put in place. No spectators were allowed to enter the arena, nor teammates or supporters. The referees on the mat wore face shields, and following a match, the wrestlers bowed to the opponent’s coach in the corner instead of the traditional handshake. There was even a restriction on the amount of time allowed in the warmup room to prevent overcrowding.

As of Oct. 25, two weeks following the end of the competition, there were no reports of anyone concerned with the tournament being infected. The following day, the Japan federation and the wrestling division of the All Japan High School Athletic Federation announced there were no cases. 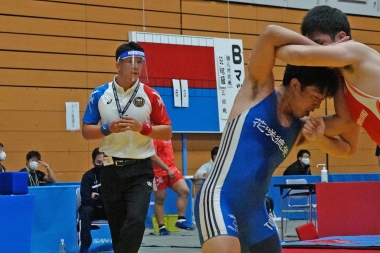 A referee wearing a face shield keeps an eye on the action.

“It is a relief,” said Yuji CHIBA, executive director of the high school federation’s wrestling division. “I think the people involved with the tournament were also anxious. The efforts to prevent infection paid off,” he added, while expressing his gratitude to the staff and all of the teams for their cooperation.

“I think we took a big step forward,” Chiba said, referring to the sport getting back into full-fledged mode.

In the individual tournament, which started on the second day and finished on the third, Tetsushi MIURA of Kyoto Prefecture’s Amino won a second straight gold medal, taking the 125kg gold to add to the one he won last year at 92kg.

Mongolian Tuvaadorj BUKHCHULUUN, who helped NSSU Kashiwa win the team championship, captured the gold at 92kg, winning four of his five matches by technical fall without surrendering a single point.

College wrestling also returned to action with the All Japan Collegiate Greco-Roman Championships, held Oct. 15-16 at Tokyo’s Komazawa Gym and drawing 10 more entries than the previous year. “Many freestyle wrestlers also took part,” said Osamu YOSHIMOTO, head of the competition committee. “I suppose everyone is so starved for competition.” 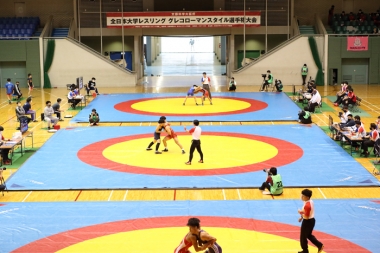 To increase ventilation inside the arena during the tournament, the cargo bay shutters were left open.

As with the high school tournament in Niigata, coronavirus countermeasures were firmly in place, including a ban on spectators and non-essential team members and supporters. And, so far at least, there have been no reports of infection as of Oct. 30, two weeks since the tournament ended.

On the mat, Yamanashi Gakuin University came away with three of the 10 titles at stake, and won the team championship for the first time in 12 years. Yamanashi Gakuin’s Bakhdaulet ALMENTAY, a foreign student from Kazakhstan, won his third straight gold, adding the 125kg title to the 97kg crowns he won the previous two years. Almentay normally competes in freestyle, having appeared at the 2018 Asian Games in Jakarta at 97kg and won a bronze medal at the 2016 Asian Championships in Bangkok.

A pair of freshmen from Takushoku University came away with titles, with Yu SHIOTANI emerging triumphant at 55kg and Kosei TAKESHITA at 63kg. They became the 13th and 14th freshmen to win titles since the tournament was first started in 1989.

Both had already established themselves as future prospects. As high schoolers last December, they both won silver medals (Takeshita at 60kg) on the senior level at the Emperor’s Cup All Japan Championships. Takeshita has also shined on the global stage, winning a bronze medal at 58kg at the 2017 World Cadet Championships.

The national team training camps that were suspended in July resumed, starting with the men’s freestyle squad on Oct. 1-6 at the Ajinomoto National Training Center in Tokyo. The team’s scheduled camp in July was suddenly canceled when Tokyo was hit with a surge of coronavirus infections. So the October camp marked the first time for the freestyle elite to gather in nearly six months. All members took a PCR test and came up negative. 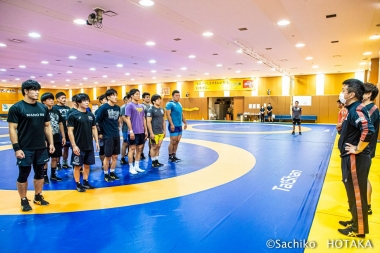 The national freestyle team gathers for its first training camp in six months.

“We want to do everything we can to prevent infection,” said freestyle head coach Kenichi INOUE. Although informed by the wrestlers’ respective clubs or schools that they were able to sufficiently practice, “We will make adjustments to our training plan as we see the movements of the athletes, so we can make the most of it up to the end,” Inoue said.

Former world champion Takuto OTOGURO, who has already secured the 65kg berth at the Tokyo Olympics, was able to continue practicing throughout much of the pandemic, even at a minimal level. He remained at Yamanashi Gakuin, where he is still a student, and Yamanashi Prefecture has had few cases of infections.

Still, he said it was comforting to be back in an atmosphere of friendly competition in a gathering of wrestlers from various teams. “I am grateful to be back in a place where I can practice with the top wrestlers in Japan,” Otoguro said. “I’m very happy. I feel like I am getting ready for the Olympics.”

From Oct. 21-26, it was the women’s turn for a national team camp. They had been able to have a camp in July, but succeeding ones were canceled, so it was their first in three months. All five women who have already qualified for the Tokyo Olympics were in attendance.

For part of the first day, the team wore masks specially crafted for wrestling, although it was not just as a coronavirus countermeasure. Back in 1968, the men used masks to simulate high-altitude training ahead of the Mexico City Olympics, as a means of increasing cardiovascular efficiency.

As it was the first camp in awhile, Hideo SASAYAMA, technical director of the women’s team, set guidelines in which he would observe the wrestlers in the early stage and, seeing what kind of condition they were in, would then decide how hard to push them.

Most important was to maintain motivation amid the uncertainty. “I want them to carry on with the mindset that ‘there definitely will be an Olympics,'” Sasayama said.