Rio Olympic silver medalist and reigning world champion Shinobu OTA will put his Greco-Roman skills to the test in mixed martial arts (MMA) by taking to the ring in a RIZIN Fighting Federation extravaganza on New Year’s Eve.

Ota, who won the 63kg world title last year in Kazakhstan, used the occasion of an MMA event in Osaka on Nov. 21 to announce his entry in the Dec. 31 event to be held at Saitama Super Arena. 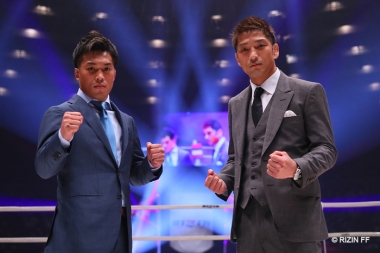 Shinobu OTA, left, and debut opponent Hideo TOKORO pose together in the ring at Osaka Castle Hall on Nov. 21. (photo courtesy of RIZIN)

Ota appeared in the ring along with his opponent, veteran MMA fighter Hideo TOKORO. The 43-year-old Tokoro has been competing for nearly two decades.

“I am Shinobu Ota from the wrestling world,” Ota said by way of introduction to the crowd at Osaka Castle Hall. “I was surprised at first to learn I would be fighting Tokoro at the RIZIN event on New Year’s Eve.

“He is a fighter I have been watching since I was little, so I am apprehensive [about facing] a fighter who I really like. But when the fight starts, it’s a different story. I will prepare so that I can score a decisive victory.”

The 26-year-old Ota had joined in workouts with MMA groups in the past. “I have a little trepidation, but I have no intention of losing,” he said. “I want this to lead to bigger things.”

Ota started wrestling at the Hachinohe Kids in Aomori Prefecture, one of the top kids clubs in the country. He went on to great success at Yanai Gakuin High School in Yamaguchi Prefecture and Yokohama-based Nippon Sports Science University, winning a string of titles.

In 2015, he won his first All-Japan championship, and the following year he became Japan’s first Olympic medalist in Greco-Roman in 16 years, beating the 2012 London gold medalist en route to the 59kg silver in Rio.

After failing to make Japan’s team in the Olympic weight class of 60kg for last year’s world championships, Ota moved up to 63kg and won out in the qualifying process to earn a ticket to the Kazakh capital of Nur-Sultan in that division. He defeated the defending champion to secure his first world gold medal. 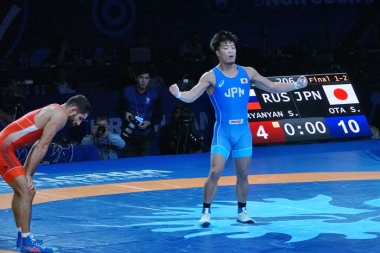 After that, he made an attempt to qualify for the Tokyo Olympics in the next weight class of 67kg, but came up short at the All-Japan Championships in December last year, closing off his path to the Tokyo Games. In September, he resigned from his company ALSOK in preparation for his new challenge.

There are currently many fighters in MMA with wrestling backgrounds. American Henry CEJUDO, a freestyle gold medalist at the 2008 Beijing Olympics, achieved titles in two weight classes in Ultimate Fighting Championsip (UFC), which is regarded as the highest level of MMA.

Iran’s Amir ALIAKBARI, a 2010 Greco world champion, also found success on the RIZIN circuit. American Daniel CORMIER, who finished fourth in freestyle at the 2004 Athens Olympics, went on to shine in UFC, winning both the light heavyweight and heavyweight belts.

When it comes to reigning world or Olympic champions getting involved in MMA, there are several examples.

In February 1999, Russian superstar Alexandre KARELIN, with a combined 11 consecutive global Greco titles at the worlds and Olympics to his name, fought in a Fighting Network RINGS event in Japan, defeating Akira MAEDA by decision. At the time, MMA bouts were fought with bare hands.

In December 2004, Athens Olympic Greco-Roman champion Karam IBRAGIM of Egypt fought at a K-1 Premium Dynamite event in Japan, but lost by KO to Kazuyuki FUJITA, a former freestyle wrestler who went on to a successful career in pro wrestling and MMA.

In both cases, the wrestlers were aiming for the next Olympics and their forays into MMA were seen as one-off outings. Neither fought in MMA again.

Thus it can be said that Ota will be the first reigning world champion to switch to MMA.