The pinnacle of the Japan wrestling season, the Emperor’s Cup All-Japan Championships will go on as scheduled, even as the country battles a third wave of the coronavirus pandemic that has seen a surge in serious cases and no signs of abating soon. 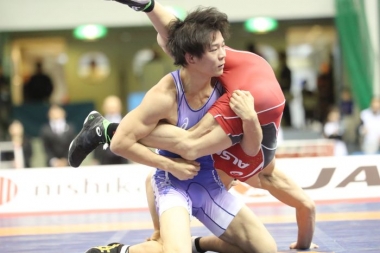 Defending champion Rei HIGUCHI could have a rematch of last year’s 57kg final with Yuki TAKAHASHI.

The Emperor’s Cup, slated for Dec. 17-20 at Tokyo’s Komazawa Gym, has been scaled down in terms of wrestlers, with each weight class limited to no more than eight entries. There will be no repechage rounds. Spectators will be prohibited in accordance with strict anti-virus protocols.

Of the eight wrestlers who have already clinched places on Japan’s team for the Tokyo Olympics, the only one entered in the Emperor’s Cup is world champion Kenichiro FUMITA (Miki House) in the Greco-Roman 60kg division. Of his challengers, Ayata SUZUKI, of Fumita’s alma mater Nippon Sports Science University, will be looking to defend the title he won last year in Fumita’s absence.

Conversely, defending women’s 50kg champion Yui SUSAKI (Waseda University) will be the only wrestler skipping the tournament among those who will try to earn Olympic spots at the Asian Olympic qualifying tournament in March in Xi’an, China.

Among the men, Sosuke TAKATANI (ALSOK), who will attempt to secure an Olympic berth at freestyle 86kg, is entered in the 92kg division. This gives Takatani a chance to win his 10th national title overall in a fourth different weight class, having previously struck gold at 74kg, 79kg and 86kg.

As the squad to be dispatched to the qualifier has already been decided, the outcome of this year’s Emperor’s Cup will have no effect on the status of team members. Their place is still guaranteed, even if they fail to win the title. 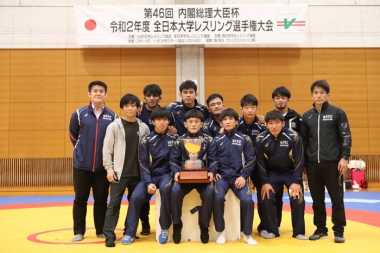 NSSU, with three silver medalists and seven third-place finishers in the eight weight classes, amassed 71 points to finish well ahead of runner-up Takushoku University with 46. It was NSSU’s 21st title overall and first in two years.

NSSU got titles from Yuto TAKESHITA at 57kg, Kodai OGAWA at 61kg and world junior champion Kaiki YAMAGUCHI at 65kg. Yamaguchi added to the 61kg title he won in 2018, while Takeshita, the 2019 Asian junior champion, and Ogawa, won their first collegiate crowns.

Takushoku had two champions. In the 74kg final, Kojiro SHIGA overwhelmed NSSU freshman Yudai TAKAHASHI by technical fall for his third straight title in a clash between two of Japan’s national team members at the 2019 World Championships in Nur-Sultan.

Shiga competed at 70kg in Nur-Sultan, the weight class in which he won his first two collegiate titles, while Takahashi wrestled at 79kg. He was still a student at Kyoto’s Amino High School when he made his debut at the senior worlds.

Takushoku’s other gold medalist was Takuma TANIYAMA at 70kg, adding to the 65kg he won in 2018.

Bakhdaulet ALMENTAY of Kazakhstan etched his name in Japan wrestling history when the Yamanashi Gakuin University senior captured the 125kg gold to become the ninth four-time champion in the history of the tournament.

Almantay, coming off winning a third straight collegiate Greco title in October, won three of his four matches by technical fall, and did not surrender a point. The former world junior bronze medalist won the first two of his four titles at 97kg in 2017 and 2018.

Morikawa makes it 3 in a row 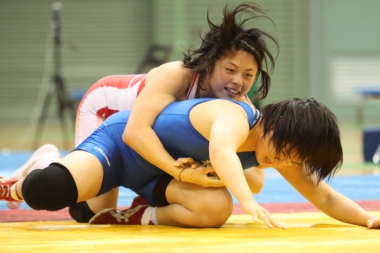 NSSU’s Miwa MORIKAWA wins in the 65kg final for her third straight title.

Morikawa, who stunned Dosho at the All-Japan Championships en route to the women’s 68kg title to set up the playoff, needed just 38 seconds to overwhelm Kokushikan University’s Chinae MUTO by 10-0 technical fall to triumph at 65kg. They were the only entries in the weight class as some schools did not participate for pandemic-related reasons.

World junior and U23 champion Yuka KAGAMI made a long-awaited but successful collegiate debut when the Toyo University freshman triumphed at 76kg. She topped Daito Bunka’s Mizuki NAGASHIMA by 12-2 technical fall.

In the featured match of the day, 2018 world cadet champion Sakura MOTOKI, a freshman at Ikuei University, won the 59kg gold by handily defeating NSSU’s world U23 champion Yumeka TANABE, denying her a third straight title.

In the men’s freestyle 57kg class, world junior champion Toshiya ABE of Kokushikan rebounded from a disappointing loss in the quarterfinals at the national collegiate tournament earlier in the month to capture the gold.

Of the three national team camps scheduled for November, only the women’s one was held, as it was early enough to beat a nationwide coronavirus surge that caused the cancellation of the men’s freestyle and Greco-Roman.

The women’s camp, which started Nov. 11 at the Ajinomoto Training Center in Tokyo, drew 20 participants, including all five wrestlers who have secured Olympic team berths.

The camp included training in psychological support for high-performance undertakings, as well as yoga to learn breathing techniques. The aim is to provide support to allow the wrestlers to keep their composure over the uncertainty of the Tokyo Olympics and the cancellation of the world championships.

Because of a spread of the coronavirus in the collegiate wrestling world, the freestyle camp slated to start Nov. 13 and the Greco-Roman from Nov. 16 were called off.

Also, the National Boys and Girls Championships, scheduled for Nov. 20-22 at Tokyo’s Yoyogi No. 1 Gym, was cancelled when it was deemed impossible to assure the safety of the wrestlers and coaches.