TOKYO—Sosuke TAKATANI became the fifth wrestler in Japan history to win 10 consecutive national titles, and did it in his fourth weight class when he won the freestyle 92kg crown at the Emperor’s Cup All-Japan Championships held Dec. 17-20 at Tokyo’s Komazawa Gym.

Takatani, who will represent Japan at the Asian Olympic qualifying tournament in China in March at 86kg, challenged himself by moving up to 92kg, and scored a pair of 10-0 technical falls, taking just 1:24 in the final to overwhelm Ryoichi YAMANAKA. 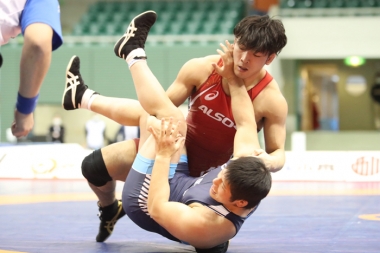 “I wanted to test myself on how I could handle bigger, stronger wrestlers at this tournament,” said the 31-year-old Takatani, who was named the Outstanding Wrestler in freestyle. “Amid the pandemic, the number of opponents was limited, but it served its purpose.”

To prevent the spread of the coronavirus during the current surge nationwide, the tournament was held with no spectators under strict protocols such as wearing masks and maintaining physical distance. Each weight class was limited to a maximum of eight entries.

His 10 titles overall ties him with four others for fifth on the all-time list, which is topped by women’s multi-world champion Kyoko HAMAGUCHI with 16. Yasutoshi MORIYAMA holds the record for consecutive titles with 14 (1982-95).

“I’m very happy to record an achievement of 10 consecutive titles,” Takatani said. “As for winning in four weight classes, I don’t know the history, but I think I’m the first, so I’m proud.”

Two others have won titles in four weight classes: Tomohiro INOUE and Kaori ICHO, but those were due more to realignments in the divisions. The difference in weight for Inoue was just 8 kilograms and just 6 for Icho; in Takatani’s case, the span is 18 kilograms. 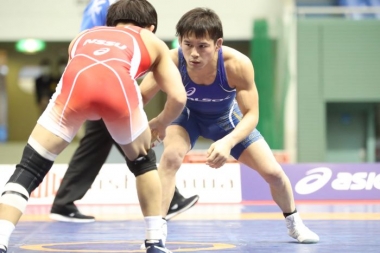 Yuki TAKAHASHI sizes up Yuto TAKESHITA in the 57kg final.

In other action, Yuki TAKAHASHI regained the 57kg title as a potential high-profile rematch with defending champion Rei HIGUCHI never came to fruition.

Takahahi, the 2017 world champion and 2018 bronze medalist, scored two rolls in the second period to secure a 5-3 victory over Nippon Sports Science University’s Yuto TAKESHITA in the final for his fourth title overall and first in two years.

In the semifinals, Takeshita upended Higuchi, the 2016 Rio Olympic silver medalist who defeated Takahashi in last year’s final to earn a ticket to the Asian Olympic qualification tournament, to be held in March in Xi’an, China.

Higuchi lost to Takeshita 5-1, then struggled to even come away with a bronze medal, as he barely held on for a 9-8 victory over 2019 Asian bronze medalist Yudai FUJITA.

“I was able cut weight and stay motivated [for this tournament], and this is the level I am at now,” Higuchi said. “Along with being glad this wasn’t the Asian qualifier, I have to keep in mind my frustration here and, over the next three months, work on the problems that became clear.”

Tetsuya TANAKA, who will also try to earn an Olympic spot in China, saw his reign as freestyle heavyweight king come to an end when he was dealt a 3-1 loss in the 125kg final to SDF Physical Training School teammate Taiki YAMAMOTO, who regained the title he had won back-to-back in 2015-16.

“At last year’s Emperor’s Cup, I not only lost, I didn’t even finish third,” Yamamoto said. “At that time, I felt fed up with wrestling. It was a something I had never tasted before.

“To not even win a medal in a tournament linked to the Olympics was really depressing. But a number of coaches offered words of encouragement and that led me here, and I came in with strong determination to win.”

NSSU’s Jintaro MOTOYAMA, the 2019 world junior silver medalist at 74kg, made a successful return to 70kg and picked up his first national title by beating Hirotaka ABE, 8-3, in the final. 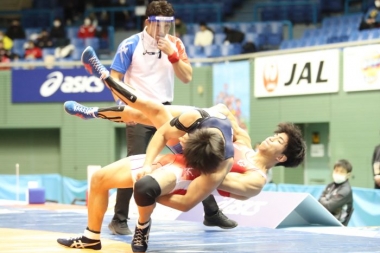 Motoyama, who became the seventh different champion in the seven years since the 70kg division was established, previously triumphed in 2018 at the Meiji Cup All-Japan Invitiational Championships, the spring senior national tournament also used as a qualifier for global events. Last year, he moved up to 74kg in a bid for the Tokyo Olympics that came up short.

“It’s my first tournament in awhile, so about a week ago my nerves starting getting to me. But today, I didn’t feel nervous,” Motoyama said. “I went up to 74kg for the Olympic qualifying, but as I normally weigh only around 74kg, this is the best weight class for me.”

Ogawa scored a takedown midway through the second period to take the lead and added some late points for 6-2 win in the 61kg final over Shoya SHIMAE.

Yamaguchi, the world junior champion at 61kg, won a battle of activity points over Waseda University’s Ryoma ANRAKU, taking the 65kg title with a 2-1 victory.

The victory was a repeat of Yamaguchi’s win over Anraku in the semifinals at the national collegiate championships. 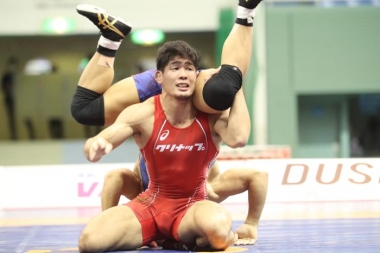 Kirin KINOSHITA earned his first national title with a victory at 74kg.

At 74kg, Asian bronze medalist Daichi TAKATANI failed to hold a lead in the final minute of the final and fell 7-3 to Kirin KINOSHITA, a former collegiate star who had lost in his two previous trips to the finals at the Emperor’s Cup.

Trailing 3-1, Kinoshita scored a takedown with :42 left to go ahead on last-point criteria, then clinched the win when he countered a back lift for 4 points, denying Takatani, Sosuke’s younger brother, a second career national title.

“It had been almost exactly a year since my last match,” said Kinoshita, three-time collegiate champion from 2015-17 while at Yamanashi Gakuin University. “Last year, I lost in the Olympic qualifying, and I even thought about retiring.”

Kinoshita took advantage of the fact that all but one wof the eight wrestlers who have already clinched places at the Tokyo Olympics, including Keisuke OTOGURO at freestyle 74kg, skipped the tournament.

Kinoshita advanced to the final with a 7-2 win over Kojiro SHIGA, the 2019 Asian silver medalist at 70kg.

In his press conference, Kinoshita was asked about his unusual first name, which means “giraffe” in Japanese, although it is written with different characters. He said his parents explained to him that the name came from numerology regarding the number of strokes to write the characters, although he himself admitted he doesn’t really understand it.

Asked if he likes “kirin,” he quipped, “I like the animal and the beer.”

Naoya AKAGUMA extended his streak of 97kg titles to three with a fourth overall, dominating Takashi ISHIGURO in the final with three rolls off a lace lock to cap a 10-0 technical fall in 1:56.

In the first round, Ishiguro ousted Takuma OTSU, the Asian silver medalist and last year’s champion at 92kg.

In a thrilling 79kg final, Ryuki YOSHIDA nearly squandered an eight-point lead, but held on to defeat Yudai TAKAHASHI, 8-7, and relegate the NSSU freshman to a second straight runnerup finish.

It was a first senior title for Yoshida, last year’s national collegiate champion who now competes for the SDF Physical Training School.

Among the early casualties in the weight class was Asian gold medalist Shutaro YAMADA.