TOKYO—World champion Kenichiro FUMITA came up short of scoring with the new throws he has been working on, but he still managed to capture the Greco-Roman 60kg gold at the Emperor’s Cup All-Japan Championships for a third career title and first in two years.

Fumita had to settle for a 2-1 victory in the final over defending champion and practice partner Ayata SUZUKI, with all of the points awarded for passivity, after launching his opponent into the air several times with a newly developed spinning arm throw but seeing him land on his feet instead of his back. 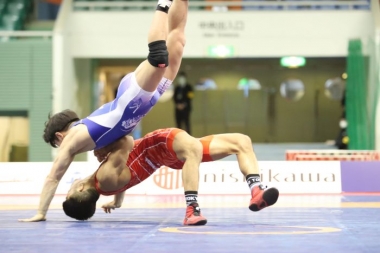 Kenichiro FUMITA sends Ayata SUZUKI sailing —but not to his back —in the 60kg final.

“Before I even qualified for the Olympics, I wanted to address the issue of coming up with new ways to attack as part of my preparation,” said Fumita, who earned the Emperor’s Cup as the most outstanding wrestler for the second year in a row. “Over this year, I wasn’t able to practice like I would have wanted, but as much as I could, I worked on my offensive wrestling.”

Fumita was the lone wrestler among the eight who have already qualified for the Tokyo Olympics to take part in the tournament, which was held under strict pandemic protocols at Tokyo’s Komazawa Gym.

He clinched his Olympic spot with a victory at last year’s World Championships in Nur-Sultan. The Emperor’s Cup was his first competition since winning the gold at the Asian Championships in New Delhi in February.

The long layoff made him realize how much he missed live action, which outweighed the risks of an injury or possible wounded pride from losing to a domestic opponent.

“Since the start of the pandemic, it really hit me that I couldn’t take for granted that there would be tournaments,” Fumita said. “I don’t know about the others, but from the time I qualified, that was not everything. My goal is the Tokyo Olympics, but I love wrestling, and I want to wrestle as much as possible.

“Of course, there was getting into shape and getting down to weight, but the main reason is that I definitely want to enter any competition for which I am eligible. From the time I heard that this Emperor’s Cup would be held, I was certain I would enter and I started training for it.”

As part of the coronavirus countermeasures, entries were limited to a maximum of eight in each weight class. Fumita had just two matches, and advanced to the final with a 12-1 technical fall in the semifinals.

In the final, he caught Suzuki, a student at his alma mater of Nippon Sports Science University where he still trains, with an arm throw several times, and while he injured his opponent’s elbow, he was unable to turn the moves into points. In the par terre position, he worked on lifts, instead of his bread-and-butter gut wrenches, and those fell short as well.

“I think I did what I wanted, but it didn’t produce points, which gives me something new to work on,” Fumita said. “Overall, I think it went well. I’m satisfied that I know clearly when needs to be done.” 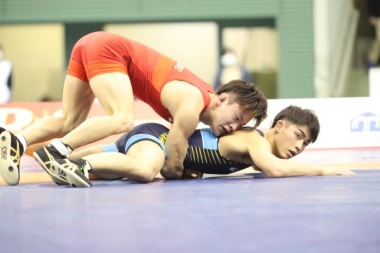 Hiromu KATAGIRI defeats now-teammate Yu SHIOTANI in the 55kg final for the second year in a row.

In other Greco-Roman finals, Hiromu KATAGIRI dominated Yu SHIOTANI–now his teammate at Takushoku University–in the 55kg final for the second year in a row, having denied him a historic victory in 2019.

Katagiri, the 2019 Asian silver medalist, routed Shiotani by 9-0 technical fall in 2:21, which he finished off with a headlock throw for his third straight title.

“He’s gotten stronger from last year, but I’m still a bit above him,” Katagiri said of Shiotani, who won the national collegiate title as a freshman in October. “I don’t know if he was nervous, but his movement was different in the match than it is in practice. If he fixes that and works hard, he can get a medal at the World Championships.”

Last year, Shiotani came one win from becoming the first-ever high schooler to win a Greco-Roman title at the Emperor’s Cup. But Katagiri had other thoughts, and stormed to a 12-0 technical fall in just over a minute that he capped with a brash 5-point throw.

“It was my second time to face him, and I’m dejected that I lost in pretty much the same way,” Shiotani said. “I thought there was more that I could do. Compared to last year, I feel like I’ve closed the gap. But I am still missing something and that’s why I lost.”

For Katagiri, a senior at Takushoku, his future in the sport remains uncertain. He will start a full-time job in April with an energy company that is not among the few that specifically hires and sponsors wrestlers.

“I don’t know if I will be able to continue wrestling,” he said. “If I can’t, I want to use what I acquired in my wrestling life as a member of society.

“Typically as a first-year employee, I will be very busy. I don’t know if I will be able to practice, or even if I will get time off to go to tournaments. I’ll decide [on my future] after I get started on the job.”

Takushoku picked up another Greco-Roman title when Kensuke SHIMIZU demolished defending champion Yoshiki YAMADA by 13-3 technical fall in the 63kg final for his first national title.

At 87kg, So SAKABE marked a return from the depths of despair defeating Self-Defense Forces Physical Training School teammate and three-time defending champion Masato SUMI with a late 6-3 victory in the final. 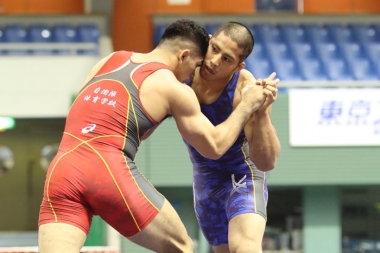 So SAKABE tangles with three-time champion Masato SUMI in the 87kg final.

“He’s an opponent who has won a number of times in a row,” said Sakabe, who broke a 3-3 tie with a stepout with :08 left, then got a last-second 2-point penalty. “We’re on the same team and the same year. He’s the champion and very strong. But I put out what I did to get here, and in the end, I won with heart.”

In June 2018, Sakabe was shocked to receive a ban for doping at the Meiji Cup All-Japan Invitational Championships. A drug prescribed by a doctor for a stomach disorder that he had taken mistakenly contained a banned substance, and it would not be until February 2019 that the Japan Anti-Doping Agency would completely exonerate him as blameless.

But the incident took a toll on Sakabe, who still has pending a lawsuit for damages against the pharmaceutical company that manufactured the drug. He had been a rising star when he won the 75kg title at the 2016 Meiji Cup to earn a trip to the World Championships (at 80kg), but had to overcome a long blank when he returned last year.

“It’s been awhile since I won a championship, so I’m really happy,” said the 27-year-old Sakabe, who has moved up to 87kg after finishing third last year at 77kg.

Sumi is among the wrestlers who, by virtue of victories at last year’s Emperor’s Cup, will represent Japan at the Asian Olympic qualifying tournament in March in Xi’an, China. Their places are set regardless of how they fared at this year’s Emperor’s Cup.

Yuta NARA was the only one among the four others in Greco-Roman heading to the Asian qualifier who failed to come away with a victory. A 5-1 loss in the semifinal at 97kg to Masaaki SHIKIYA ended his run of four consecutive titles.

“It was my first match since the Asian Championships in February,” Nara said. “I was careful about my conditioning and weight loss, but I was defeated. Shikiya was better in terms of preparation and being physically fit.”

Shikiya himself had to settle for the silver medal, as 32-year-old Masayuki AMANO scored with a roll off the par terre position in the second period and held on for a 3-2 victory for his first national title since 2011. 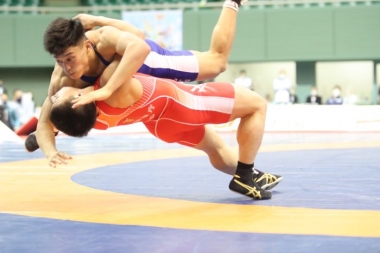 Shogo TAKAHASHI had no problem moving up a weight class to take the 72kg gold by beating Taishi HORIE.

Shogo TAKAHASHI, Japan’s entry at 67kg in China, moved up to 72kg and was equally dominant there, scoring a fall in his semifinal match before routing Taishi HORIE by 8-0 technical fall in the final for his third straight title and fourth overall.

As for the remaining two, Shohei YABIKU won a second straight title at 77kg and fifth overall, while Arata SONODA made it seven in a row at 130kg.

Yabiku won 2-1 in the final over Naotsuku SHOJI, with all of the points scored on passivity and neither able to score in the par terre position. He was named the outstanding wrestler for Greco-Roman.

“Before the last Olympics, I entered the qualifying tournament and ended with an agonizing result,” Yabiku said. “This time, there is still time for me to work on the issues that came up here, and raise my level to secure an Olympic spot by winning the qualification tournament.”

Sonoda remained in a class of his own in the heaviest division, winning both of his matches by technical falls, including an 8-0 romp in 1:13 over Takushoku’s Sota OKUMURA in the final.

The other Greco titles went to defending champion Satoki MUKAI at 82kg and 2018 Asian silver medalist Tsuchika SHIMOYAMADA at 67kg.

Shimoyamada, who had lost to Takahashi in the final each of the past two years, regained the title he won in 2017 with a 2-1 win in the final over 2018 world U23 champion Katsuaki ENDO.

From the par terre position, Shimoyamada executed a throw that, while not landing Endo onto his back, put him outside the line for the winning point.

Of note was the performance of former high school star and now NSSU freshman Kyotaro SOGABE, who won the bronze medal with a technical fall over national college champion Shintaro YOSHINAGA of Senshu University.

In the repechage round, Sogabe stormed back from a 5-0 deficit to defeat Takayuki INOGUCHI 9-5. It was Inoguchi who last year ended the Olympic aspirations of Shinobu OTA, when the Rio 2016 silver medalist at 59kg made a last-ditch attempt to make it Tokyo by moving up to 67kg.