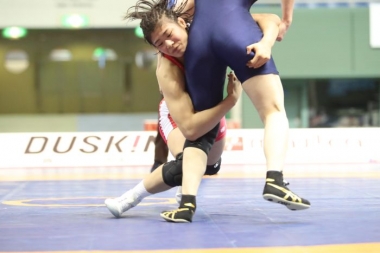 Nonoka OZAKI shoots for a takedown against Atena KODAMA in the 62kg final.

Their victories came in the absence of the wrestlers who have already secured spots at the Tokyo Olympics in their weight classes, and while that did little to diminish their accomplishments, it firmly established them as prospective candidates for the 2024 Paris Olympics.

Ozaki, a member of the JOC Elite Academy who attends Teikyo High School, captured the women’s 62kg title with a 5-0 victory in the final over 2018 world junior champion Atena KODAMA.

A year ago, Ozaki, a two-time reigning world cadet champion, qualified for the Emperor’s Cup with a victory at the National Games, but was too young to participate, leaving her hungry to test herself against the nation’s best.

“That was difficult to swallow,” said the 17-year-old Ozaki of missing out last year. “This year I was able to enter, and even though my training was affected by the coronavirus, I encouraged myself and was able to win the championship.”

The tournament was held under strict pandemic protocols, with entries limited to a maximum of eight per weight class and no spectators allowed in the arena. All but one of the eight wrestlers who have qualified for the Tokyo Olympics opted to not take part.

Among the Olympians who skipped the event was women’s world 62kg bronze medalist Yukako KAWAI, whose absence Ozaki acknowledged took some of the luster from her gold medal.

“This is an Olympic weight class and Olympic team member Yukako Kawai wasn’t entered,” Ozaki said. “Looking it that way, the top wrestler in Japan wasn’t here, so winning the 62kg title doesn’t seem that great.”

Still, it was quite an achievement for Ozaki, the gold medalist at the 2018 Youth Olympics at 57kg. She defeated 2017 world U23 champion Yui SAKANO and defending champion and fellow high schooler Ami ISHII en route to the final.

“I didn’t think about who I was facing, I just focused on my own wrestling,” Ozaki said. “While there are still some things I need to work on, I showed at this tournament how I have made progress.”

Fujinami had a more challenging path to get to the top of the podium at 53kg, but she stormed her way through with three solid victories, including taking down such luminaries at two-time former world champion Haruna OKUNO and reigning world silver medalist Nanami IRIE, while not surrendering a point.

Fujinami, a student at Inabe Sogo Gakuin High School in Mie Prefecture, beat Okuno by fall in her opening match, and dominated Irie 6-0 in the final.

“The All-Japan Championships was a stage that I had dreamed of competing on since I was little,” said the 17-year-old Fujinami, whose older brother Yuhi was a 2017 world bronze medalist at freestyle 70kg. “I came here with the aim of winning, so I am happy.” 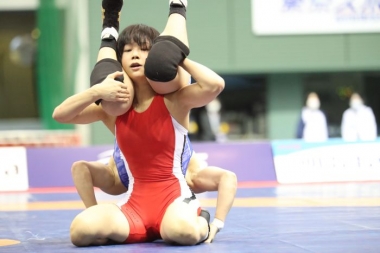 High schooler Akari FUJINAMI did not surrender a point in three matches en route to winning the 53kg title.

In her opening match, Fujinami aggressively took the fight to defending champion Okuno, who has been battling motivational and self-confidence problems since missing out on the 53kg spot at the Tokyo Olympics to fellow 2018 world champion Mayu MUKAIDA.

Fujinami, who said she went through a growth spurt of 5 centimeters this year, effectively used her height advantage in a single-leg attack, off of which she slammed Okuno to her back for an eye-catching 4-point move.

Okuno, who suffered an apparent left leg injury earlier in the match, never could mount an offensive, and, when Fujinami executed a stepover off a single-leg to catch her on her back, the Shigakkan University student all but gave up for a fall in 3:46.

“When I look back, I had an ‘accident’,” Okuno said. “But this is a world of competition, and you don’t know what is going to happen. The most important thing is to be the winner at the end. So it wasn’t a factor.”

After blitzing collegian Yumi SHIMONO by 10-0 technical fall in the semifinals, Fujinami scored two takedowns in the first period and one in the second to top Irie, the 2019 world silver medalist at 55kg.

“I really like facing strong wrestlers, and this is the first time I have felt this excited and looked forward to a tournament,” Fujinami said. “It was fun.”

Okuno came away empty-handed when she lost 3-1 to Shimono in the repechage round. She had beaten Irie in the 53kg final last year, which avenged a loss to her in a playoff for the 55kg spot to the World Championships.

Fujinami has not lost a match since June 2017, when she fell in the 44kg final of the national junior high school championships to Umi ITO, the 50kg silver medalist at this Emperor’s Cup.

She has now won 17 consecutive tournaments, including cadet titles at the prestigious Klippan Lady Open three times, and has never failed to win a medal since her first competition as a elementary school first-grader.

Asked about Fujinami, Okuno replied, “I appeared in the Emperor’s Cup for the first time when I was in my first year of high school, and I think she’s stronger now than I was as that time. She’s good, she has good balance. She has long arms and legs, a body that isn’t usual for the lighter weight classes. Anyway, she was strong.” 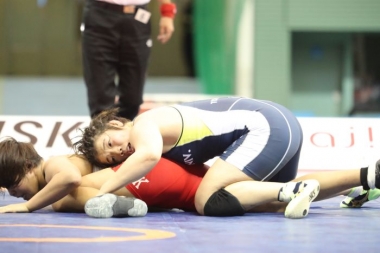 Kagami, a reigning world junior champion and also a product of the JOC Elite Academy, came from behind to top defending champion Yasuha MATSUYUKI, 6-4, in the 76kg final to add to the title she won at non-Olympic 72kg in 2018.

With two world cadet crowns also to her credit, Kagami has established herself as the frontrunner to follow in the footsteps of world medalists Kyoko HAMAGUCHI and Hiroe MINAGAWA in the heaviest weight class.

In the final, Kagami fell behind 4-1, but gained a stepout early in the second period, then scored a takedown with :52 left before hitting a gut wrench 20 seconds later to secure the victory.

“When I was down by 3 points, part of me thought it was over,” Kagami said. “But I knew with the practice I put in, I was confident that I could beat anyone, so I thought it would definitely be OK. I made myself keep my composure.”

Another teenager who emerged as a potential future star was Tsugumi SAKURAI, who not only won the gold at 55kg for her first senior national title, but also became the first-ever national champion from newly founded Ikuei University.

Sakurai, who finished second last year as a high schooler, defeated Ibuki TAMURA 3-0 in the final to come out on top in a weight class that included former world U23 champion Saki IGARASHI and former world junior champion Umi IMAI. She won her first two matches by technical fall.

“As I didn’t have any matches this year, I practiced aimed at this tournament, so I’m happy to win the title,” said Sakurai, who had not wrestled since winning the gold in the senior division at the Klippan Lady Open in January.

Sakurai, who has set her sights on the 2024 Paris Olympics, said she has made great progress since enrolling at Ikuei, which is located in Takasaki, Gunma Prefecture, and is already challenging powerhouses like Shigakkan and Nippon Sports Science University.

“I started college this year and before that, I had only a few people to practice with and not so many matches,” Sakurai said. “Since starting college, there are many practice partners in my weight class. In that, there’s times I win and times I lose, and it’s gradually made me stronger as I prepared for the challenge here. “

Sakurai captured world cadet titles in 2016 and 2017, and was the bronze medalist at the Asian juniors last year. In the final at this year’s Klippan, she defeated veteran Sofia MATTSON (SWE).

One of the biggest surprises came in the women’s 59kg final, in which Akie HANAI scored a takedown in the final :05 for a stunning 3-2 win over 2019 Asian champion and Shigakkan teammate Yuzuka INAGAKI for her first national senior title.

“My teammates who are the same year as me were winning titles and I was always losing,” said Hanai, the 2019 world junior champion at 57kg. “For me to join them, I’m thrilled.”

Inagaki, who already had a senior title to her credit after winning in 2018 as a high schooler, led 2-1, with all of the points scored on the activity clock. As the clock ticked down, Hanai threw caution to the wind and shot for a single leg, which she finished off for the winning takedown.

“She’s a younger member who I always train with, so I know she is strong,” said Hanai, who is two years older. “I fell behind because of the passivity points and had to play catch-up. At the end…I wasn’t thinking anything, and when I got the points, I thought time had already run out. But when I looked over, I saw the clock was still running. ‘Oh, I’ve won,’ I thought.” 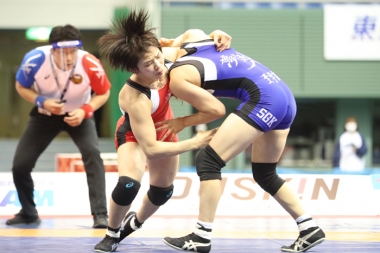 Sae NANJO successfully defended her 57kg title with a win in an all-Shigakkan final.

In another all-Shigakkan final, world junior and U23 champion Sae NANJO defended her 57kg crown by storming to a 10-0 technical fall over Sena NAGAMOTO.

Nanjo, who was named the outstanding wrestler for women, got over her toughest hurdle in the semifinals, when she outlasted another Shigakkan member, Hanako SAWA, 8-6.

Former world champion and defending champion Yui SUSAKI, who will attempt to win a berth at 50kg at the Tokyo Olympics at the Asian Olympic qualifing tournament, did not participate.

World bronze medalist Masako FURUICHI had only one match at 72kg, and it didn’t even last a full period as she overwhelmed Kanon KOBAYASHI by 10-0 technical fall in 2:28. The weight class had just three entries.

“I only had one match in this tournament, but I did what I have to do,” said Furuichi, who made an unsuccessful bid last year for the Olympic place at 68kg.

Shigakkan’s Naruha MATSUYUKI, the Asian silver medalist this year at women’s 68kg and Yasuha’s twin sister, captured the gold in that weight class with a 5-0 victory over Chiaki SEKI.

Matsuyuki, the 2019 world junior champion, scored two takedowns in the second period to clinch the win and add to the previous title she won in 2017 at 72kg.

Mei SHINDO, the Asian champion at 72kg, dropped down to 68kg for this tournament for the first time, only to be ousted by Seki, 5-2, in the semifinals.