Otoguro, who has already secured a place at this summer’s Tokyo Olympics in the freestyle 65kg class, will join older brother Keisuke on the SDF team after graduating in March from Yamanashi Gakuin. 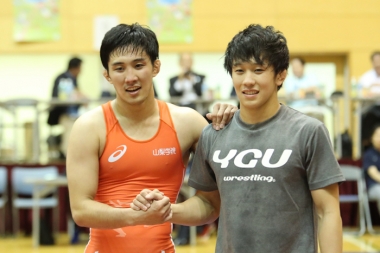 Keisuke, himself a graduate of Yamanashi Gakuin, has also qualified for the Tokyo Games, earning a berth at freestyle 74kg, meaning the two will be able to push each other as they try to both strike gold for family and country.

At the 2018 World Championships in Paris, Takuto burst onto the global scene when he won the 65kg gold medal at the age of 19 years 10 months 9 days, making him the youngest Japanese male wrestler in history to win a world title.

Not surprisingly, Otoguro was recruited by many of the teams operated or sponsored by large corporations, where he would have received celebrity status.

But he decided to join the SDF, which set up the Physical Training School in 1961 as a well-equipped setting to develop elite athletes in a variety of sports. The team has produced 12 Olympic medalists in wrestling, including gold medalists Atsuji MIYAHARA, Tatsuhiro YONEMITSU and Hitomi OBARA, and captured six titles at the most recent All-Japan Championships last December.

“My brother being there had something to do [with my decision], but also it is professional and the No. 1 team in Japan,” Otoguro said. “The coaches have won Olympic medals, and there are many athletes with great achievements. 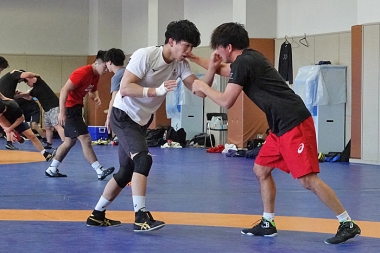 “I feel that if I can train in a place where others have accomplished what I am striving to achieve, it can only make me stronger,” he said, adding that he is “excited” to get started practicing with the team.

Yonemitsu is one of the coaches of the squad, along with former Olympic bronze medalists Kenji INOUE and Shinichi YUMOTO.

By snubbing the corporate teams, Otoguro gave up the freedom to continue practicing at Yamanashi Gakuin, the collegiate powerhouse where world medal-winning alumni such as Yuki TAKAHASHI still train with the current crop of students.

“[The Self-Defense Forces] has excellent facilities, good training partners, solid coaches and comprehensive physical care, and I thought that if I didn’t have such an environment, I would not be able to win globally,” Otoguro said.

The potential for a lucrative deal with a corporation was never a factor. It was more about choosing what he believes will be the strongest team to make him a winner, particularly at the upcoming Olympics in his home country.

“I am not continuing to wrestle to make money,” he said. “I’m doing it to win an Olympic gold medal.” 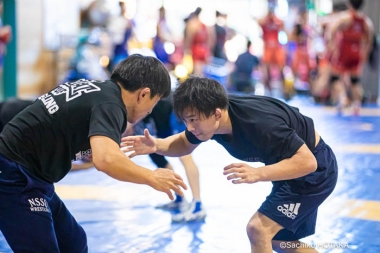 For the second time during the pandemic, the Japanese government declared a state of emergency for a number of prefectures, including Tokyo, in response to a surge in coronavirus infections this winter. The declaration on Jan. 10 covered 10 prefectures and was scheduled to be lifted on Feb. 7, but was extended to March 7. (It was lifted in several prefectures in late February).

But because the government action did not impose a “lockdown,” the sports world was allowed to proceed with its Olympic preparations. 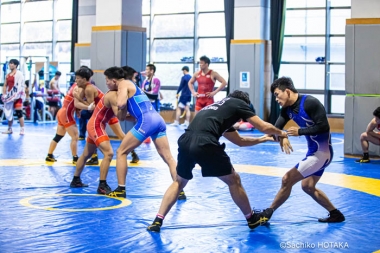 From Feb. 23, the national men’s freestyle team, which had national camps canceled in November and January, finally got back onto the mat together at the NTC for the first time since October.

A total of 20 wrestlers and eight coaches and staff took part, including the Olympics-bound Otoguro brothers, and the four hopefuls who will compete at the Asian Olympic qualifying tournament—Rei HIGUCHI (57kg), Sosuke TAKATANI (86kg), Naoya AKAGUMA (97kg) and Tetsuya TANAKA (125kg).

Keisuke Otoguro has indicated he will wrestle at the Asian Championships, while younger brother Takuto has not yet committed.

The national Greco-Roman team did not have a training camp. However, the Nippon Sports Science University group of current wrestlers and alumni—including world 60kg champion Kenichiro FUMITA—at times invited other teams for joint practices that were the equivalent of a national team session.

History was made on Feb. 20 when Toyo University’s Misato MIYAUCHI was elected as chairperson of the athletes committee of the East Japan Collegiate Wrestling Federation, making her the first woman to hold a chair position in the 85 years since the organization was founded. 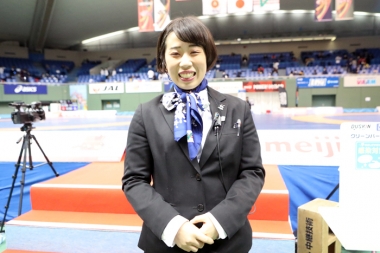 Misato MIYAUCHI, who was recently elected to head the athletes committee of the East Japan Collegiate Wrestling Federation.

Miyauchi, who will be starting her senior year in April, was elected in an online vote that also saw Chairman Toshio ASAKURA, the supervisor of the Kokushikan University team and a 1981 world champion, reelected to a second term.

Miyauchi ended her career as a wrestler after suffering an injury in the summer of her sophomore year. She stayed active in the sport by joining the federation staff, for which she earned recognition for her achievements in tournament organizing and other matters.

The timing of the appointment was significant, coming in the wake of a scandal involving Yoshiro MORI, the president of the Tokyo Olympic and Paralympic Organizating Committee. Mori was forced to resign after making an inappropriate remark about women that drew condemnation from around the world.

Miyauchi’s selection is an indication that wrestling is making strides to narrow the gender gap. “I hope it opens a path for a woman to get on the board of directors in line with the times,” Asakura said.