Back on Jan. 7, the government declared a second state of emergency for 10 prefectures including Tokyo, putting a crimp into national team activities, which were either cancelled or scaled down.

But with the official announcement that the Asian Olympic qualifying tournament and Asian Championships would be held as scheduled in April in Kazakhstan, national team camps for both men and women were conducted in March to begin preparations. 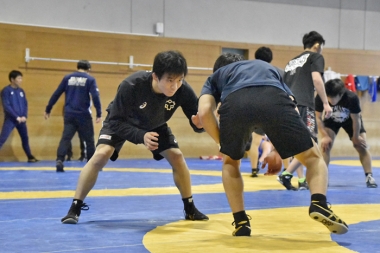 With the focus on those entered in those two tournaments—the first international events for Japanese wrestlers since last year’s Asian Championships in February 2020—the women had a camp March 10-11, followed by the freestyle team March 15-21 and the Greco-Roman team March 19-25.

The freestylers were back March 29 for a camp through April 5, while the Greco-Roman squad was scheduled to return April 1-8.

Among those entered in the Asian Olympic qualifying tournament is Rei HIGUCHI, the 2016 Rio Olympic silver medalist at freestyle 57kg who will try to qualify for the Tokyo Games at the same weight.

“I have remained completely focused, and have been working hard to have no doubt about making it,” Higuchi says. “I am 99% sure of victory. I took the silver in Rio, and the only place to make up for it is at the Olympics.”

At the All-Japan Championships in December last year, Higuchi suffered a first-round loss to a younger opponent. Although he came back to finish in third place, he cited his inability to properly manage his weight control as the reason for his defeat. Now he receives the advice of a nutritionist, saying, “There will be no half-hearted measures from now on.”

Due to a resurgence of coronavirus infections, the U-13 Japan Open and National Schoolboy and Schoolgirl Invitational Championships, both scheduled for March, were canceled. 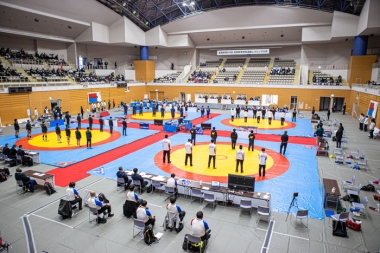 But competition proceeded for the Kazama Cup National High School Invitational Championships, held March 24-26 without spectators at the Higashi General Sports Center in Niigata city. That made it the first national-level tournament to be held this year.

It also marks the second time the Kazama Cup has made news during the pandemic. A year ago at this time, the tournament was among a string that were canceled as the coronavirus began to spread. But about five months later, it was decided to revive it as ‘postponed’, and it was held in October with strict protocols in place, making it the first national-level tournament since February of that year and serving as a template for holding competitions safely.

Even as restrictions were being eased, it came at a time when schools were still forbidding trips, and when students were in the midst of studying for college entrance exams. As such, a total of 57 wrestlers, including three schools in the team competition, withdrew from the tournament.

This year, the full field of 580 wrestlers took part. Other than disallowing spectators again, it was pretty much back to normal in terms of organization and execution. That could be attributed to the fact that following the postponed tournament five months earlier, not one case of infection was reported. This time, thorough coronavirus countermeasures were followed as well, including the rental of a full-body sanitizing mist shower.

In the individual competition, Yuto NISHIUCHI, a first-year student at Kochi Minami High School in Kochi Prefecture and a 2018 world cadet bronze medalist at 48kg, stole the spotlight by taking the freestyle 55kg gold, beating two champions from 2020 along the way.

For the second year in a row, a Mongolian student claimed a title. Batbayar NAMBARDAGVA, a first-year student at Chiba Prefecture’s Nippon Sport Science University Kashiwa High School, won the 125kg gold. He followed in the footsteps of compatriot Tuvaadorj BUKHCHULUUN, who triumphed at 92kg last year for NSSU Kashiwa.

The torch relay for the Tokyo Olympics, which was postponed for one year, got started on March 25. One runner when it passed through Tochigi Prefecture was Yoshiaki YATSU, who competed in the freestyle 90kg class at the 1976 Montreal Olympics. The 64-year-old Yatsu completed his section, despite running with a prosthetic leg. 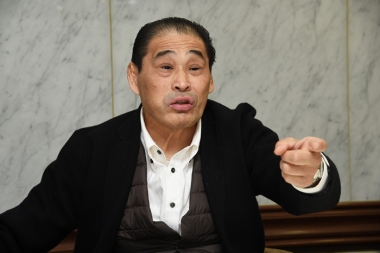 As the gold medalist at the 1978 Asian Games and 1979 Asian Championships, Yatsu was in his prime heading to the 1980 Moscow Olympics at 100kg. But he did not get to compete after Japan joined the U.S.-led boycott. After that, he turned to professional wrestling, making his debut at New York’s Madison Square Garden and going on to enjoy stardom in that career.

Yatsu retired in 2010, but five years later, made a comeback in selected matches. He suffered from diabetes and, in June 2019, had his left leg amputated. But with Japan hosting the Olympics, he set a goal to “participate” in another Games, which served as motivation for his rehabilitation.

When the postponement of the Tokyo Games was announced, Yatsu said, “I guess I don’t have much luck with Olympics.”

But after running his leg of the relay, he commented, “It was the first time to put on a uniform with the Olympic logo since the Montreal Games. My mind is free of regrets about the Olympics. This relay is the final chapter of the Olympic Games for me.”

On April 7, former great Saori YOSHIDA is scheduled to carry the torch when the relay passes through her native Mie Prefecture.