TOKYO–Two years apart in age, brothers Hayato and Takashi ISHIGURO had only won titles at the same tournament once before, at the 2018 national collegiate championships when they were together at Nihon University.

Fast forward to last month. By making it to the top of the podium in their respective freestyle weight classes at the Meiji Cup All-Japan Invitational Championships, it gave the Tokyo-born siblings a chance to take a trip together to compete for a bigger prizes– senior world medals. 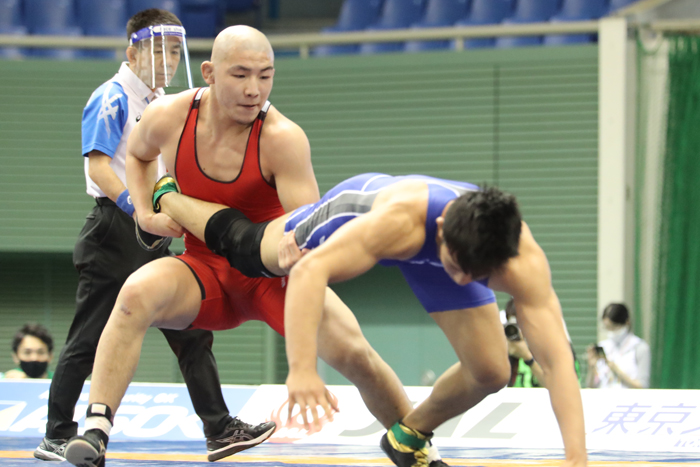 Hayato ISHIGURO gets a leg up on Taisei MATSUYUKI in the 86kg final.

Hayato captured the 86g title with a 7-1 victory in the final over Taisei MATSUYUKI, and two days later, Asian bronze medalist Takashi followed suit by downing Hibiki ITO 7-0 for the 97kg crown at the tournament held May 27-30 at Tokyo’s Komazawa Gym.

For Hayato, the victory followed up his triumph at the Emperor’s Cup All-Japan Championships in December to clinch his place on Japan’s team to the World Championships slated for October in Oslo.

Takashi had lost at the Emperor’s Cup, but automatically earned the ticket to Oslo because champion Naoya AKAGUMA did not enter the Meiji Cup, thus making him ineligible for playoffs held in weight classes in which the winners of the two tournaments were different.

“It’s the first time that we won at an All-Japan as brothers,” Takashi said. “At the Emperor’s Cup last year, I lost in the final and only my younger brother won. This time we were able to win together, so I’m really happy.”

None of the wrestlers who have or could still qualify for the Tokyo Olympics in freestyle (the 57kg berth is still undecided) entered the Meiji Cup, including brothers Takuto and Keisuke OTOGURO.

That opened the door for some new blood to get chances on the world stage, and out of the 10 who will be heading to Oslo, seven will be making their debut at a senior worlds. That’s not to say they will are completely lacking international experience–Hayato Ishiguro is one of five who won world junior or U-23 titles in 2018 or 2019.

Ishiguro, who ended a three-decade drought for Japanese men at the world juniors when he won the 2018 world title, had accompanied his brother to the Asian Championships in April in Almaty, Kazakhstan, but came home empty-handed after suffering a surprise loss to an Iraqi opponent in a bronze-medal match.

There is speculation that his disappointment over that result led him to make an ascetic gesture of atonement–he completely shaved his head for the Meiji Cup. He gave a somewhat spurious explanation, saying, “I thought it could improve my footwork,” adding, “The opponents looked a little scared.” 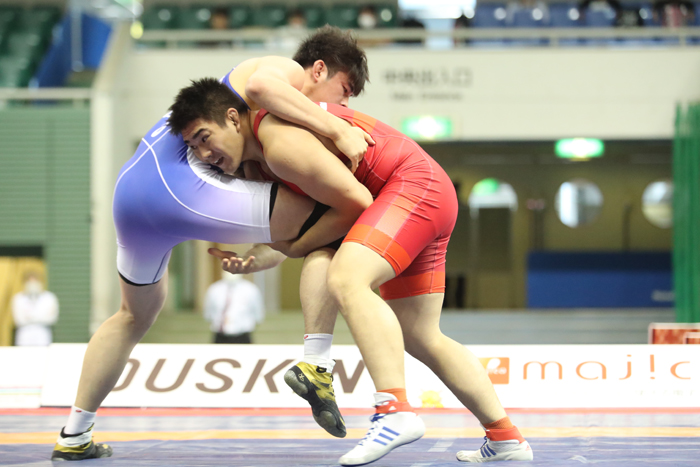 Takashi ISHIGURO joined his younger brother on the team to the World Championships with a victory in the 97kg final over Hibiki ITO.

There was nothing feigned about his performance on the mat. Ishiguro started with a 9-3 victory over 2020 Asian champion Shutaro YAMADA, then advanced to the final with a 10-0 technical fall of 2019 Asian junior champion Tatsuya SHIRAI.

In the final against Matsuyuki, two-time national collegiate champion Ishiguro was limited to an activity-clock point in the first period, but then put the match away with a takedown and 4-point throw for his first Meiji Cup title and first trip to the senior worlds.

For Ishiguro, the hardest part might have been having to quickly drop 8-9 kilograms to make weight. He had to self-quarantine for two weeks after returning from Almaty and fell behind in his training.

“Before the semifinal, I thought of defaulting, because I was feeling the effects of the weight loss and my legs were cramping,” Ishiguro admitted. “I talked to my coach and my father and they said to just give it a shot and see what happens.”

In the 97kg final, Takashi Ishiguro went ahead against Ito with an activity-clock point and two stepouts, then put the match away with a pair of takedowns. 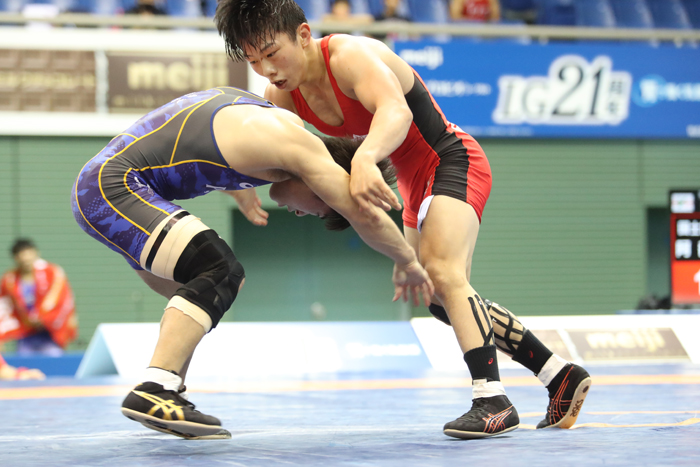 Two of the world junior champs in 2019, Toshiya ABE at 57kg and Kaiki YAMAGUCHI at 65kg, will be making another overseas trip together, bound for Oslo in a bid to repeat their success on the senior level.

Kokushikan University’s Abe struck Meiji Cup gold for the first time with a 3-1 victory in the final over Yudai FUJITA, a 2019 Asian bronze medalist at 61kg. He will be making his first trip to the senior worlds in the absence of Emperor’s Cup champion Yuki TAKAHASHI, who will be facing Rei HIGUCHI in a playoff for the Tokyo Olympic spot at 57kg.

“This is the first time to make the podium at an All-Japan tournament, so everything is the first for me,” said Abe. “The World Championships were always in the back of my mind, but first I had to focus on winning each and every match.”

Abe overcame a scare in the semifinals, when he needed a decisive stepout with :03 left to defeat Yuto TAKESHITA, a bronze medalist at this year’s Asian Championships. An unsuccessful challenge gave Abe a 3-2 win. 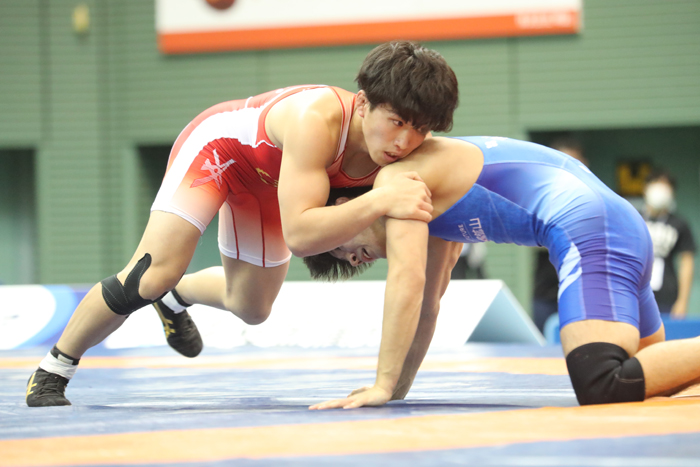 Kaiki YAMAGUCHI fends off a takedown attempt in the 65kg final by Kei YONEZAWA.

Yamaguchi, the Emperor’s Cup champion at 65kg, scored all of his points in the second period to defeat Kei YONEZAWA 6-2 in the final to complete the All-Japan double and earn a second trip to a World Championships.

“It got a little dicey in the beginning, but I managed to turn it around,” said Yamaguchi, who won the 2019 world junior title at 61kg in Tallin. “At this point, I don’t think I am competitive on a global level, so I need to improve both physically and technically.”

The world team slots in four of the freestyle weight classes were decided by playoffs, with an even split in the results among the Meiji Cup champions, who won two and lost two.

At 79kg, Emperor’s Cup champion Ryuki YOSHIDA bounced back from an early-round loss to deny Yudai TAKAHASHI a second straight trip to the senior worlds with a dramatic 3-2 victory in their playoff clash.

Trailing 2-1 with the clock ticking down, Yoshida scored a stepout off a single leg with :04 left to take the lead on criteria, and an unsuccessful challenge added the final point.

Takahashi, who was still a high schooler when he competed at the 2019 World Championships in Nur-Sultan, crushed Yuta ABE in the Meiji Cup final with a 10-0 technical fall to set up the playoff with Yoshida, a first-round loser at this year’s Asian Championships.

Yoshida’s bid to win the place outright was derailed by a stunning loss by fall in the quarterfinals at the hands of Abe. Yoshida had led 6-0, only to see Abe storm back with 10 straight points before ending the match with :29 left. 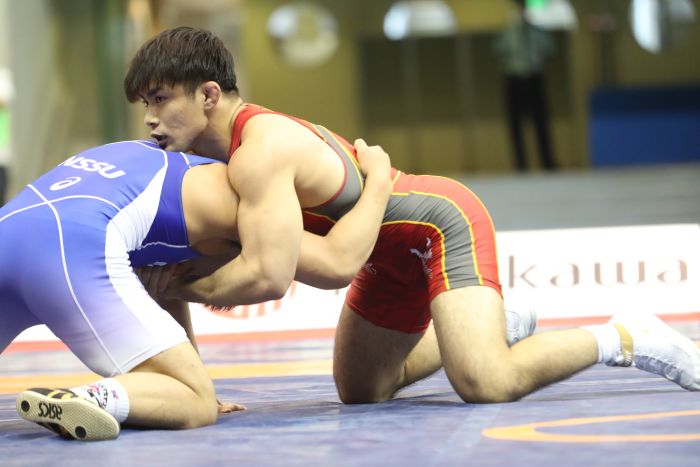 Ryuki YOSHIDA bounced back from a loss in the Meiji Cup to defeat champion Yudai TAKAHASHI in the world team playoff at 79kg.

Also reversing the outcome of an earlier Meiji Cup defeat was Emperor’s Cup champion Jintaro MOTOYAMA, who looked like a different person in thrashing Ayumu SUZUKI 10-1 in the playoff at 70kg, scoring four stepouts in building up an 8-0 first-period lead.

Motoyama, the 2019 world junior silver medalist and 2018 world U-23 bronze medalist, had lost 6-4 in the quarterfinals to Suzuki, who went on to win the gold by defeating Hirotaka ABE 6-3 in the final with a 4-point lift-and-slam in the last 20 seconds.

The 70kg competition saw the return of Taishi NARIKUNI, a former collegiate champion who has competed just twice — back in 2019 — since being hit with a two-year doping ban in 2017 after a doctor mistakenly prescribed a cold medication containing a banned substance.

Narikuni, who harbors a dream of someday becoming the “Shohei Otani of wrestling” and winning world titles in both freestyle and Greco-Roman, lost 8-3 in the semifinals to Abe, but came back to take the bronze medal with a victory by fall over Hidetaka SAKANO. 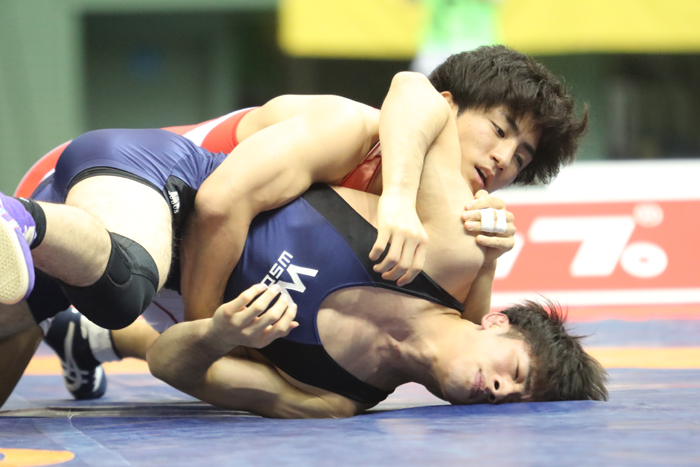 Jintaro MOTOYAMA, top, avenges a loss earlier in the day to Ayumu SUZUKI by soundly beating him in the world team playoff at 70kg.

At 61kg, 2018 world U-23 champion Toshihiro HASEGAWA put on a takedown clinic in rolling to a 10-0 technical fall in 1:32 over Emperor’s Cup champion Kodai OGAWA, avenging a loss to Ogawa in the semifinals of the Emperor’s Cup.

An hour or so earlier, Hasegawa won his first Meiji Cup title with a 6-1 victory over Kotaro KIYOOKA. Hasegawa had advanced with a 12-2 technical fall in the semifinals over Kazuya KOYANAGI in a battle of medalists from the 2018 Asian Championships.

“This time, I think I was able to do my style of attacking wrestling,” Hasegawa said. “I think I have matches that people enjoy watching, so I made it a point to incorporate it in my style.”

Kiyooka made the final after knocking off Ogawa in a 7-4 thriller, scoring a last-second exposure off a single-leg attack after he himself had fallen behind by giving up a takedown with :07 left.

The other playoff winner was Yamanashi Gakuin University’s Masaki SATO at 74kg. Sato’s road to Oslo meant beating Emperor’s Cup champion Kirin KINOSHITA twice, and he did it by the narrowest of margins.

At 125kg, Emperor’s Cup winner Taiki YAMAMOTO earned a trip to a third senior worlds after notching his third straight Meiji Cup title and fourth overall with a 2-1 victory over Yuji FUKUI.

Yamamoto managed to win despite being at what he said was “10 percent strength.” He had suffered a neck injury at the final world Olympic qualifier in early May while winning his opening match that forced him to default his next bout.

“I couldn’t wrestle the way I wanted to at all and I think my matches were really boring,” Yamamoto said. “I’m not satisfied, and I look at it as having just done the minimum.” 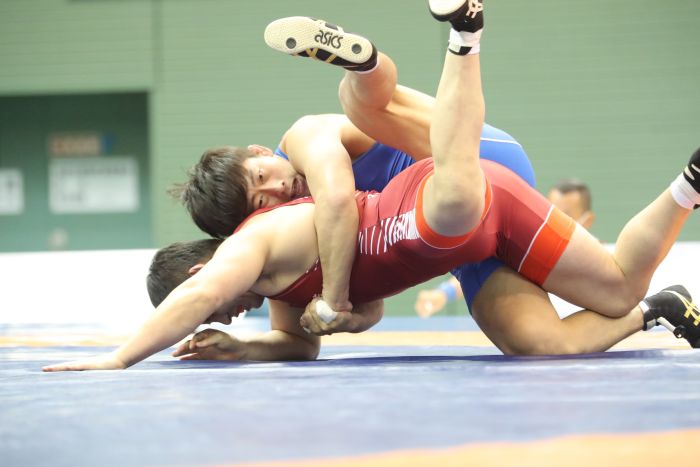 Takuma OTSU works for a gut wrench in rolling to a technical fall victory in the 92kg final over Ryoichi NAKAYAMA.

Yamanashi Gakuin’s Takuma OTSU, who competed at the Emperor’s Cup at 97kg as the first step in a final bid to make the Tokyo Olympics but lost in the first round to Takashi Ishiguro, dropped down to 92kg and defended the title he won in 2019 to secure a ticket to a second World Championships.

In a weight class with just three entries, Otsu, the 2020 Asian silver medalist, had two matches, and won both by 10-0 technical fall in less than two minutes, the second over Ryoichi NAKAYAMA in the final.

The Emperor’s Cup champion, Sohsuke TAKATANI, had entered the tournament, but withdrew after clinching a place at the Tokyo Olympics at 86kg by winning at the final world qualifier in Sofia, Bulgaria.