Once again, the Japanese women put on a dominant performance at the Olympics, winning four gold medals at the Tokyo Games to match the total from five years ago in Rio.

Risako KAWAI (57kg) became the third woman in history to win a second Olympic wrestling gold, and combined with younger sister Yukako KAWAI (62kg) as the first-ever sibling gold medalists in women’s wrestling with victories at Makuhari Messe in Chiba.

Former two-time world champions Yui SUSAKI (50kg) and Mayu MUKAIDA (53kg) won gold medals in their Olympic debuts, giving Japan a total of 15 of the 24 golds awarded since women’s wrestling was added to the Olympic program in 2004.

Risako Kawai added the 57kg gold to the one she won five years ago in Rio at 63kg with a solid 5-0 victory over Iryna KURACHKINA (BLR) in the final, the night after Yukako won the 62kg title.

Both sisters watched nervously from the stands as the other wrestled, yelling encouragement and then sharing tears of victory. 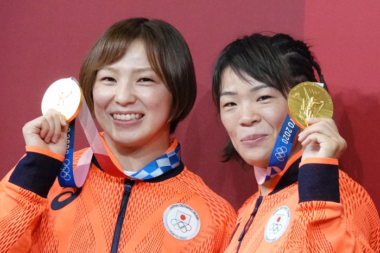 “I thought after seeing the match Yukako had yesterday, I had to do it,” the 27-year-old Kawai said. “To say there was no pressure would be a lie. Compared to Rio, each and every match felt heavier. However, I believed that the pressure would help me and felt I needed to embrace it, and that is how I went into the fight.”

Kawai took quite an arduous path to join legends Saori YOSHIDA and Kaori ICHO as multiple Olympic champions in women’s wrestling. Icho won an unprecedented four golds, the only woman to do so in any sport in Olympic history, while Yoshida won three.

Icho had aimed for fifth, but Kawai moved down to Icho’s weight class of 57kg, setting up a head-to-head clash between the Rio champions that enthralled the wrestling world. Kawai won out, and secured her ticket to the Tokyo Games by winning a third world title in 2019.

But waiting for her in Tokyo was yet another gold medalist from Rio, Helen Maroulis (USA), who had beaten Yoshida in the 53kg final but had moved up to 57kg. Kawai overcame that hurdle in the semifinals, scoring a 2-1 victory over Maroulis with all points scored on the activity clock.

“In Rio, my thought was that I also wanted to climb onto the podium at the Tokyo Olympics,” Kawai said. “It’s been five years since, and I feel I got it back. [Yukako and I] have always been aiming for it, and even though we argued and fought many times, we were still able to pull it off. I thought it would take away some of the joy for Yukako if, after she won for the first time, I didn’t also win.”

Yukako Kawai, the world silver medalist in 2018 and bronze medalist in 2019, made it to the highest step of the podium by beating reigning world champion Aisuluu TYNYBEKOVA (KGZ) 4-3 in the 62kg final.

“I’ve always wanted a gold medal on the world level,” the 24-year-old Kawai said. “Five years ago at the Rio Olympics, when Risako took first place, she said to me, ‘There is no other view like that and I want Yukako to see it, too.’ I was wondered what view she was talking about. But now I can see it, and it’s really a nice view.”

“I think I made a change in the past year, and people around me say I have improved,” Kawai said. “I feel like I was not the person I was up to now, but that I was fighting for the first time as the improved me.”

Arguably the most dominant individual of the tournament, male or female, was the 22-year-old Susaki, who found getting to the Olympics much harder than competing at it. 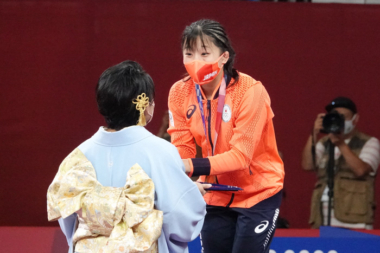 Susaki won all four of her matches by technical fall without conceding a point, outscoring her opponents 41-0 as she remained undefeated against foreign foes in her career. That included an 11-0 win over reigning world champion Mariya STADNIK (AZE) in the semifinals.

“To get the gold medal, I went all out to come up with a solid strategy for my opponents,” Susaki said. “I went into the tournament with a strong belief and determination to win.”

Susaki had failed to make the team to the 2019 worlds, where a medal would have meant automatic qualification for the Tokyo Olympics. But when Japan did not get a Tokyo berth at 50kg, it reopened the door for Susaki, who won a ticket at the Asian Olympic qualifying tournament.

“This was the setting for a dream that I had once given up on,” Susaki said. “But with the support of those around me, I didn’t give up and made it here. At that time, my spirit was nearly at rock bottom. But I am blessed with people and it makes me want to fight for each step forward.”

Susaki, who grew up in about 30 kilometers from Makuhari Messe in Matsudo, had been accorded the honor of being Japan’s flag-bearer at the opening ceremony along with basketball star Rui HACHIMURA.

“It was a valuable experience,” Susaki said. “By walking in at the head of the Japan delegation, it gave me energy. There was no pressure because I served as flag-bearer. The 50kg class was the last match on the last day of wrestling. I went into it with the feeling that I would cap things by winning the gold medal.”

Mukaida was no stranger to the top of a medal podium–she had won world titles in 2016 and 2018 at 55kg. But she also had a habit of letting sure victories in big matches get away, which cost her world or Asian titles on three occasions in recent years. 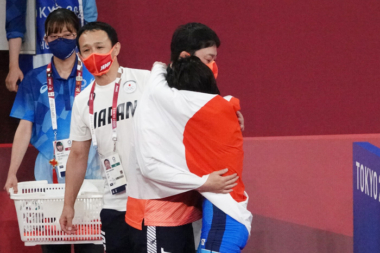 Mayu MUKAIDA and coach and fiance Shota SHIDOCHI embrace after her victory at 53kg.

But in the Olympic final at 53kg against Qianyu PANG (CHN), it was Mukaida who turned the tide after falling behind, confidently and courageously scoring five points in the second period to notch a well-earned 5-4 victory.

“At the end, I just left it up to fate, and I kept believing I would definitely win,” Mukaida said. “I never wavered, and I fought with emotion up to the end.”

For Mukaida, the journey to Olympic champion was a joint effort with coach and fiance Shota SHIDOCHI. The two had put off their marriage until after the Olympics, which meant waiting an additional year when the Games were postponed.

“To get this far, as the two of us did our work, there were many people who helped create the environment for training and I am very grateful,” the 24-year-old Mukaida said in a tearful post-match interview.

Seeing tears in Shidochi’s eyes, Mukaida said, “He went through much more hardship than I did, and he always encouraged me. I’m happy because we did it with the goal of winning this tournament.”

Mukaida has long seemed destined for success. As a fellow native of Mie Prefecture and wrestling in the same weight class, Mukaida has been regarded as the second coming of Yoshida. On a hot summer night, she regained the Olympic 53kg title to Japan.

“I thought I would regret it for the rest of my life if I didn’t win this,” Mukaida said. “There were a lot of difficulties before I could make it to the Olympics. But I’ve really worked hard for this day, so I’m glad I got this result.” 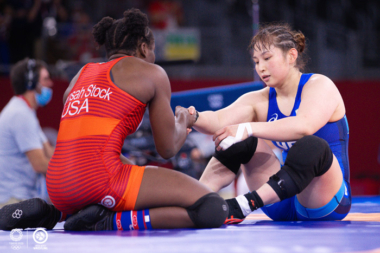 Dosho was dealt a quick 10-0 loss in the first round by reigning world champion Tamyra MENSAH STOCK (USA), a repeat of their meeting at the 2019 worlds. Dosho came back to defeat Feng ZHOU (CHN) in the repechage, but then lost by fall to Alla CHERKASOVA (UKR) in the bronze-medal match.

“In the final match, I thought I would fight so hard for the six minutes that it wouldn’t matter if I lost,” Dosho said. “I feel regret that it didn’t turn out that way, but I am grateful to have stood on such a wonderful stage.”

Dosho went into the Tokyo Games as the defending champion, but has not been the same wrestler since undergoing shoulder surgery in 2018 and suffering a knee injury in 2019.

“Over the past five years, I went through many things that nearly broke my spirit, but I am grateful for the support I received from many people,” the 26-year-old Dosho said. “I have appeared in two Olympics and feel I’ve grow as a person.”

Minagawa, the 2019 world silver medalist, opened with two shutout victories to advance to the 76kg semifinals, but lost to world bronze medalist Aline ROTTER FOCKEN (GER) 3-1 after giving up a takedown with 1:15 left. 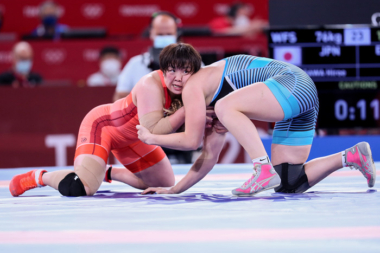 Hiroe Minagawa, competing in her first Olympics at age 33, came up short of winning a medal at 76kg. =photo by UWW／Martin Gábor

The 33-year-old Minagawa then lost the third-place playoff Qian ZHOU (CHN) when she was taken down to her back and pinned in 2:30, denying her from becoming Japan’s first medalist in the heaviest weight since Kyoko HAMAGUCHI won a bronze at the 2008 Beijing Olympics.

“I couldn’t do anything yesterday [in the semifinals], so I thought I would put pressure on from the start today so that I have no regrets later,” Minagawa said after the match.

“I knew my opponent as quick at tackling. She really got me. It’s pitiful that I couldn’t fight the full six minutes, but it was positive that I was aggressive from the start. I wanted to win the first medal since Kyoko-san…”