Takuto OTOGURO had to wait an extra year to settle some old scores, but it was worth the wait after he captured a hard-earned gold medal in one of the toughest weight classes at the Tokyo Olympics.

Otoguro won the freestyle 65kg gold in his Olympic debut, defeating 2016 Rio bronze medalist Haji ALIYEV (AZE) 5-4 in a dramatic final on the final day of the wrestling competition at Makuhari Messe in Chiba. 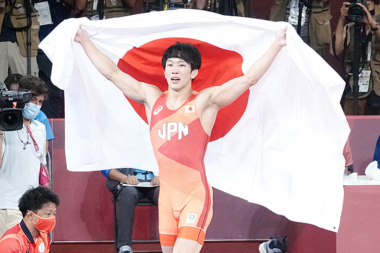 “I went through a lot of hard times,” Otoguro said. “But thanks to people around me, I was able to move forward a bit and make my dream come true. I’m really happy.”

Otoguro’s gold gave Japan three medals in the two men’s styles. In Greco-Roman held earlier in the week, reigning world champion Kenichiro FUMITA was less than thrilled to come away with a silver medal at 60kg, while unheralded Shohei YABIKU defied the odds and won a bronze at 77kg.

Japanese men have now won at least one medal in every Olympics in which the country participated dating back to the 1952 Helsinki Games.

Otoguro became the first Japanese man to win an Olympic gold since Tatsuhiro YONEMITSU—now one of his coaches at the Self-Defense Forces—did so at the 2012 London Olympics.

Otoguro established himself as Olympic material when he won the 2018 world title in Budapest at the age of 19 years 10 months, making him Japan’s youngest-ever male world champion. But that also made him a marked man, and he slipped to fifth at the 2019 World Championships in Nur-Sultan. 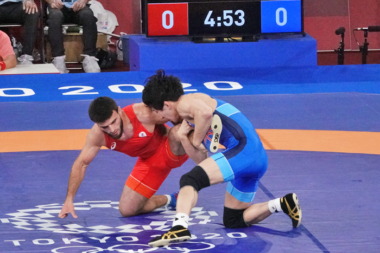 “After the Olympics started, Japanese athletes in other sports began winning gold medals one after the other, and I felt a great deal of pressure,” Otoguro said. “We hadn’t won any medals in freestyle when my turn came, and it was very tough tournament. We all came together as one and that helped me win the title.”

Otoguro avenged both of the losses he suffered at the 2019 worlds, beating Iszmail MUSZUKAJEV (HUN) 4-1 in the quarterfinals and reigning world champion Gadzhimurad RASHIDOV (ROC) 3-2 in the semifinals. He had lost to Rashidov in the second round in Nur-Sultan and to Muszukajev in the bronze-medal match.

The Olympic gold-medal match against Aliyev was also a rematch, from the repechage round in Nur-Sultan that Otoguro had won in a freewheeling, wild bout 11-9. In the Tokyo final, Otoguro scored the go-ahead points with 30 seconds left before holding on for another dramatic victory.

None of Otoguro’s four wins in Tokyo was by more than three points.

Otoguro’s lone regret of the Olympics was that it would not be a double family celebration, as older brother Keisuke failed to win a medal at freestyle 74kg.

“My brother lost the day before, and the two of us couldn’t achieve [our dream] of winning gold medals together,” Otoguro said. “To make up for that, I gave everything to win it in his place.”

No silver lining for Fumita

Having gone into the Tokyo Games as a legitimate gold-medal hopeful, Fumita had no desire to see a silver lining in finishing as runner-up in his long-awaited Olympic debut. 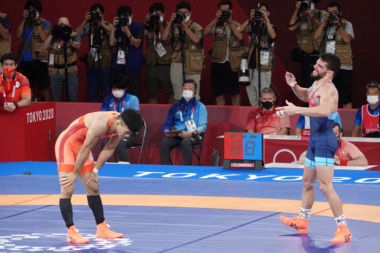 Fumita had an impressive run into the final, but lost to Luis ORTA SANCHEZ (CUB) 5-1 when his opponent converted his chance in the par terre position, then fended off the Japanese when he was put on bottom.

“It’s been awhile since I won a silver medal,” the 25-year-old Fumita said. “When I put in around my neck, it made me realize that a gold is better. After the match, I thought my strategy didn’t work.”

It marks the second straight Olympics that a Japanese wrestler lost to a Cuban in the final of the lightest Greco-Roman weight class. At the Rio Olympics, Ismael BORRERO MOLINA (CUB) defeated Shinobu OTA (JPN) in the gold-medal match at 59kg.

Fumita spent the ensuing years battling Ota, his senior teammate at Nippon Sports Science University, for berths on the national team. He eventually won out and qualified for his first Olympics with a victory at the 2019 World Championships, adding to the world gold he had won in 2017.

One thing for certain was that his rivals did their homework on Fumita. In his four matches, the Yamanashi Prefecture native was never able to set up and execute his trademark move, a back-arching throw that earned him the nickname “the Cat Wrestler” (that and his actual love of cats).

“My skills weren’t enough to overcome the research my opponents did on me.” said Fumita, who broke down in tears after the match. “Now all that’s coming to mind is what I should have done.”

Fumita fought on the first day of finals, meaning his medal was the one that extended the Japanese men’s Olympic medal streak.

“It continued the medal-winning tradition, but I was targeting a gold at the Tokyo Olympics and that it come out that way, so I’m disappointed. It’s a shame.”

Fumita already has his sights set on making another run at the gold at the 2024 Paris Olympics.

“It was an honor to be regarded [as a favorite],” Fumita said. “Because my intention is to pull Greco-Roman in Japan ahead. Coach [Makoto] SASAMOTO said, ‘An Olympic debt can only be repaid at the Olympics,’ and I have taken that to heart. I want to be able to leave the mat in three years with a smile.”

Japan saw the emergence of a new hero in the Greco middle weights in Yabiku, who came away with an Olympic bronze medal despite never having placed higher than 11th in three trips to the senior World Championships. 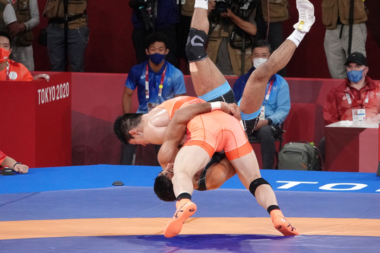 The 26-year-old Yabiku stepped up his game when he needed it most, scoring a dynamic 5-point throw during a second-period surge that toppled 2019 world and Asian bronze medalist Mohammadali GERAEI (IRI) by 13-3 technical fall.

The two had split four previous clashes between them, and Geraei got the upper hand by taking a 3-0 lead into the second period. But Yabiku cut the gap to one, then stunned the Iranian with a flip-like throw for 5 points that unnerved his opponent and he never looked back.

“I knew how he was going to fight,” Yabiku said. “My strategy was to be aggressive and not let him score points from standing. He turned me over once on the ground, but it was good that I limited it the least amount of points.

Yabiku, whose greatest international success to date was a world junior bronze in 2013, also displayed a flair for the dramatic in his opening match. Losing 1-3 to four-time Asian medalist Demeu ZHADRAYEV (KAZ), he hit a 4-point throw with 30 seconds left for a 5-3 win.

He also showed his tenacity in the quarterfinals against reigning world champion Tamas LORINCZ (HUN), losing 3-1 with only a roll in the par terre position being the margin of victory. Lorincz went on to win the gold medal.

Okinawa native Yabiku became the first-ever athlete from the southern islands to win an Olympic medal, beating karate’s Ryo KIKUNA to the punch by three days. “I feel happy to win a medal, but it’s not the best color, so I also feel I have to work harder,” Yabiku said.

After the bronze-medal match, Yabiku was handed a Japanese flag by his coach, but opted not to take a winning lap of the mat. “The referee probably would have stopped me, and also that’s a privilege of the champion,” he said. “I want to do it when I become champion.”

Tough losses for other freestylers

Japan’s three other entries in freestyle–Yuki TAKAHASHI (57kg), Keisuke OTOGURO (74kg) and Sohsuke TAKATANI (86kg)–came away empty-handed after going down to defeat in winnable matches in the early rounds.

Takahashi, the 2017 world champion, was a legitimate threat for gold in the lightest weight, but had his Olympic dream quashed by a wily opponent who didn’t always play by the rules. 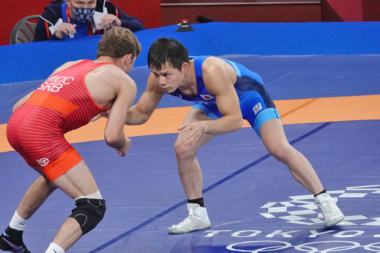 Yuki TAKAHASHI looks for an opening during his first-round victory at 57kg over Steven MICIC (SRB).

Takahashi came out on the short end of a 4-4 score in his second-round match with Nurislam SANAYEV (KAZ), in which the 2019 world bronze medalist grabbed Takahashi’s singlet several times, with only one penalty point awarded.

“In the second period, he was leading and then pulled my singlet a number of times,” the 27-year-old Takahashi said. “If I stayed calm then, I think maybe the result might have been different. I also think I should have scored points up to then. So all I have is, what if? This is the level of my ability, and put that way, there is nothing to be done.”

Making it more frustrating was that Takahashi had beaten Sanayev 14-5 in the bronze-medal match at the 2020 Asian Championships. Takahashi’s tournament ended when Sanayev lost in the semifinals to Ravi KUMAR (IND), knocking Takahashi out of medal contention.

It was a harsh outcome given all that Takahashi went through to get to the Olympics. He had failed to make the Rio Olympics, then watched as Rei HIGUCHI won the silver medal at 57kg. To make the Tokyo Games, he had to win a place at the final world qualifying tournament, then defeat Higuchi in a playoff.

“I was able to participate in the Olympics, but the wrestler who lost to me couldn’t be on this stage, so I also wanted to fight for him. I apologize to him. It is disappointing that I could not prove that Japanese lightweights are among the top in the world.”

At 74kg, Otoguro was certainly a match for two-time Asian champion Daniyar KAISANOV (KAZ), but got caught on his back attempting a counter roll off a takedown attempt and lost by fall at 3:41. Otoguro was leading 2-0 before the fateful exchange.

“I got my right hand in, but I couldn’t get it out,” Otoguro said. “My shoulders weren’t on the mat, so I thought I was still OK. But just as I thought that, the match ended. I was like, huh?” 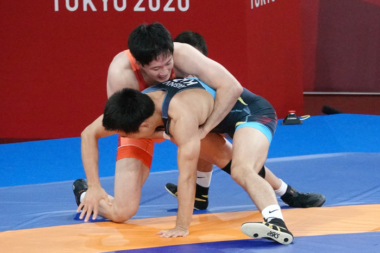 Keisuke OTOGURO battles during his first-round loss at 74kg to Daniyar Kaisanov (KAZ).

Otoguro appeared at the 2018 World Championships at 70kg, then moved up to 74kg in an attempt to make the Olympics with his brother. He won the 2019 All-Japan title–his third national title at a third different weight–then won a playoff for Japan’s Olympic spot by beating Mao OKUI, who had earned the berth by placing fifth at the 2019 worlds.

“It’s hard to take, but I have no regrets,” Otoguro said. “I did everything I could to get to the Olympics and I was mentally ready. I think I was the strongest of my life today.”

Takatani, a 10-time national champion across four weight classes, saw his bid for a first medal in his third Olympics end with 2-2 loss to 2019 world U-23 bronze medalist Osman GOCEN (TUR), whose 2-point counter lift in the first period trumped two single points scored by Takatani. 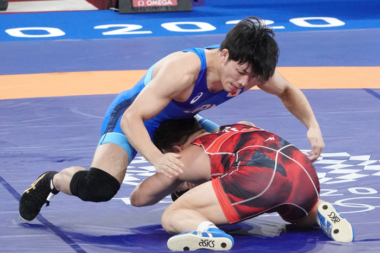 Sohsuke TAKATANI, aiming for a first medal in his third Olympics, lost in the first round at 86kg to Osman GOCEN (TUR).

“This Olympics was very different from the other two,” the 32-year-old Takatani said. “There was opposition to holding the event up to the opening, but I am grateful that it was held this way.”

Takatani, the 2014 world silver medalist at 74kg, is already looking to put the setback behind him and forge ahead.

“Looking ahead, nothing will change,” he said. “With the Olympics finished, it’s back to normal practice. There is the Emperor’s Cup [All-Japan Championships in December]. I am 32, but I am still called a “Prince,” so I have lead Japanese wrestling in a princely, active manner, and then I can pass off the baton.”