Japan will dispatch a full team of 30 members to the World Championships to be held Oct. 2-10 in the Norwegian capital of Oslo.

The team is based on the results of the All-Japan Championships in December last year and All-Japan Invitational Championships held in May. Winners of both tournaments made the team, with a playoff held in weight classes in which the champions were different. 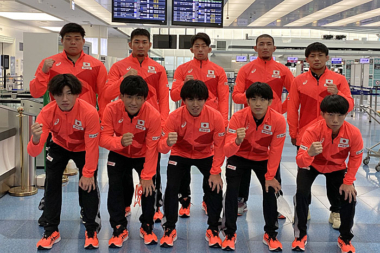 The men’s freestyle team takes a group photo before departing for Oslo on Sept. 28.

Most noteworthy is that none of the wrestlers who competed in the Tokyo Olympics, who won a combined five gold medals, a silver and a bronze, will be making the trip to Oslo.

Among the 30, only three in freestyle, one in women’s wrestling and five in Greco-Roman have previously appeared at a World Championships. That said, a number of members on the young team have won gold medals on the world cadet, junior and/or U23 levels.

Because of the pandemic, the teams in each style were limited to a single national training camp in Tokyo just prior to departing for the competition. The tournament is regarded as the start of the long road to the 2024 Paris Olympics.

“I put everything into results,” said Kenji INOUE, the men’s freestyle technical director. “I’m aiming for at least two medals and a [top-eight] place in the team standings to earn a spot in the World Cup.”

Hideo SASAYAMA, the technical director for the women’s team, encouraged the team members to step up in the absence of the Olympic champions and to not regard themselves as just filling a space.

“It is important for you to determine your own level,” he said at the beginning of training camp. “To find that out, you need to give everything. If you later have regrets like ‘I should have done that’ or end up doing nothing, then it’s meaningless to even go. There are some who have won at the cadet, junior or U23 world championships, but the senior [level] is different.”

Greco-Roman head coach Makoto SASAMOTO echoed Sasayama’s words about giving everything to test oneself as a team member, and always aiming to win one more match.

Although Japan came away with two Greco medals at the Tokyo Olympics from Kenichiro FUMITA and Shohei YABIKU, “It is hard to say that the mood of the team as a whole is rising,” Sasamoto told the team. “I want you to think, I’m the one who will do it next. It should not be, it’s no good because those two won’t be there.”

The team is as follows: 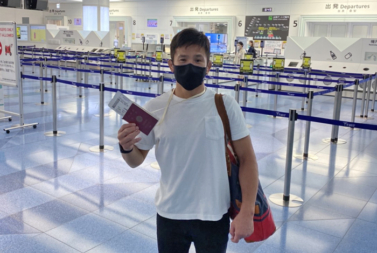 SDF coach Shinichi YUMOTO heads to Russia for a two-year stay to study coaching techniques of the wrestling powerhouse.

Yumoto, who was in SDF member Takuto OTOGURO’s corner when he won the freestyle 65kg gold medal the Tokyo Olympics, will be based in the city of Vladikavkaz in the wrestling-rich region of North Ossetia.

After taking time to get settled in early September, he said of his situation, “I will not just stay locally, but go to many republics in Russia to experience the wrestling there. I want to learn the secret of what makes those regions so strong.”

Among the many others who have preceded Yumoto on the program to gain coaching know-how were Olympic gold medalists Yuji TAKADA, Hideaki TOMIYAMA, Mitsuru SATO and Tatsuhiro YONEMITSU. All of those in freestyle went to the United States.

Yumoto, a bronze medalist at freestyle 55kg at the 2012 London Olympics, chose to go to Russia, in the area near the border with Georgia. Among those born in the region were Zaurbek SIDAKOV, who won the freestyle 74kg gold at the Tokyo Olympics, and Artur NAIFANOV, the bronze medalist at 86kg. Going farther back, it is also the birthplace of the great Arsen FADZAEV, a double gold medalist at 1988 Seoul and 1992 Barcelona. 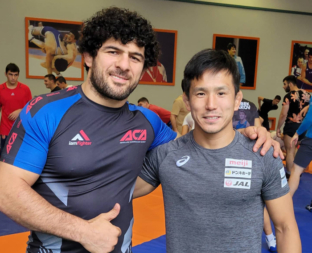 In January 2019, Yumoto led a Japanese team that made a tour of Russia, which stoked his interest in the wrestling powerhouse nation. “I got a good feel for the training environment and the commitment to the wrestlers,” Yumoto said. “Most impressive was the unique technical development system based on local history. This includes a support system for the wrestlers and the standing that wrestling enjoys within the Ossetia Republic.”

Yumoto says his aim is to learn three things. First, naturally, is to improve his skills as a coach. Second, to master the Russian language. “It’s not only to broaden my skills as a coach. In order to help contribute to making Japanese wrestling stronger, I think it is extremely effective to be able to speak Russian,” he says. His third objective, as mentioned above, is to venture beyond Vladikovkaz and seek out the secret of Russia’s strength as a whole.

Yumoto will be based at the government-administered Aslan Khadarzev Wrestling Academy, the Russian equivalent of Japan’s Ajinomoto National Training Center. Not limiting himself to the academy, Yumoto will also visit some of the many wrestling clubs in the city in his hunt for source of Russian power.

Ex-YGU star Boltin to appear in worlds before career change

Former Yamanashi Gakuin University star Oleg BOLTIN will likely be making his last international appearance for his home country of Kazakhstan when he competes at freestyle 125kg at the World Championships. 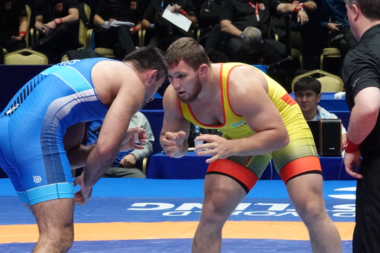 Oleg BOLTIN (KAZ), who starred at Yamanashi Gakuin University, will make his pro wrestling debut after competing at the World Championships in Oslo.

Upon graduating from YGU, where he was a four-time national collegiate champion, Boltin joined the New Japan Pro-Wrestling organization, but still competed as an amateur in an attempt to make the Tokyo Olympics.

However, after winning the gold medal at the 2020 Asian Championships, he lost out on the place on the Kazakh team to the Tokyo Games.

Following the World Championships, Boltin says he will begin his new career in the pro wrestling ring.