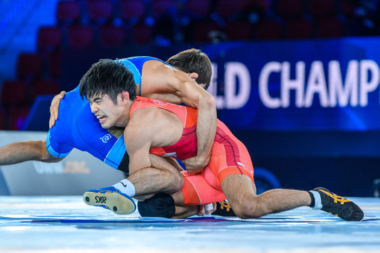 OSLO, October 2 – Former under-23 world champion Toshihiro HASEGAWA (JPN) rallied for three wins in Saturday’s opening session of the Oslo 2021 Wrestling World Championships, but the magic appeared to run out in the evening’s semifinal session.

Hasegawa, wrestling in the 61kg semifinal at Jordal Amfi Arena, fell to 2021 European champion Abasgadzhi MAGOMEDOV (RWF) by technical fall, 10-0, at 3:42 of the bout.

Despite the loss, Hasegawa remains in the running for a bronze medal in Sunday evening’s medal matches, facing the winner of a repechage bout between European U23 bronze medalist Emrah ORMANOGLU (TUR) and 2018 world bronze medalist Tuvshintulga TUMENBILEG (MGL) earlier in the day.

In the other semifinal at 61kg, three-time junior world medalist Daton FIX (USA) rolled over former European champion Arsen HARUTYUNYAN (ARM) by technical fall and will face Magomedov for the world title.

In the 86kg semifinals, David TAYLOR (USA) and Hassan YAZDANICHARATI (IRI) each won handily setting up a redo of their gold medal battle in Tokyo — won by Taylor.

61kg
Daton FIX (USA) df. Arsen HARUTYUNYAN (ARM) by TF, 10-0, 0:35
Fix, a two-time junior world champion in 2017 and 2018, used an inside trip to two points and rolled up eight more with a series of gut wrenches for the quick win against Harutyunyan, the 2019 European champion.

Abasgadzhi MAGOMEDOV (RWF) df. Toshihiro HASEGAWA (JPN) by TF, 10-0, 3:42
Magomedov scored a quick go-behind takedown followed with a bodylock and turn for a 4-0 lead on his way to a one-sided win.

74kg
Kyle DAKE (USA) df. Azamat NURYKOV (BLR), 9-1
Tokyo 2020 bronze medalist Dake scored with a quick takedown in the first semifinal at 74kg 2-0 lead and rolled up three back exposures for an 8-0 lead at the intermission. The second period was much ado about nothing, resulting in a rather unsatisfying 9-1 final score.

86kg
David TAYLOR (USA) df. Abubakr ABAKAROV (AZE) by Fall, 2:35 (6-2)
Tokyo 2020 gold medalist Taylor gave up two points on a quick snapdown and go-behind by Abakarov for an early 2-0 deficit. Taylor responded, however, with a takedown of his own, then cranked the 2019 junior European champion over for the fall at 2:35.

Hassan YAZDANICHARATI (IRI) df. Artur NAIFONOV (RWF), 8-2
In a duel between Tokyo 2020 medalists, silver medal winner Yazdanicharati took control midway through the first period to claim an 8-2 win over Tokyo bronze medalist to earn another shot at Taylor – but this time for the 2021 world title.

125kg
Geno PETRIASHVILI (GEO) df. Oleg BOLTIN (KAZ) by TF, 10-0, 4:51
Tokyo 2020 silver medalist Petriashvili fashioned a technical fall against 2021 Asia champion Boltin, who wrestled collegiately for Yamanashi Gakuin University in Japan.
Regardless of whether Boltin wins or losses in his bronze medal match Sunday, the result – a bronze medal or fifth-place –will be his best showing at a world championships.