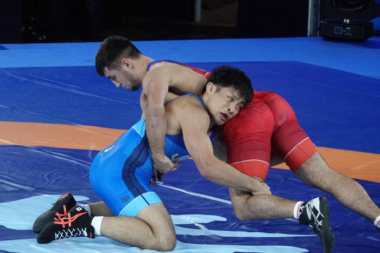 OSLO, October 3 – Japanese national team newcomer Ryuki YOSHIDA (JPN) edged Ashraf ASHIROV (AZE) on criteria Sunday to book a place in the evening’s semifinal line-up. But, the downside of this good news is he will have to face former world and Olympic champion Jordan BURROUGHS (USA).

Yoshida, a member of Japan’s Self-Defense Forces wrestling team, led off his day with a technical superiority win over Manho OH (KOR), a silver medalist at the 2014 Asian Games and then fashioned a quarterfinal win, 4-4, knowing a pair of takedowns trumped four one-pointers by Ashraf ASHIROV (AZE).

Burroughs, meanwhile, is wrestling on his 10th world or Olympic Games team for the United States and will be seeking his sixth gold medal and ninth medal overall at the world championships or Olympic Games.

Also in the quarterfinals, 2019 junior world champion Toshiya ABE fell, 2-5, to the 2019 senior world medalist Suleyman ATLI (TUR) in a bout with more posturing than solid positioning from both wrestlers.

Abe is now left to hoping that Atli can upset 2019 world U23 champion Alireza SARLAK (IRI) in the semifinals, pulling the Kokushikan University coach into the repechage bouts for a chance at a bronze medal.

Qualification – df. Darthe CAPELLAN (CAN), 8-3
Abe, wrestling cautiously through most of the bout, scored with a double-leg takedown and added a pair of ankle locks in the final minute to secure an 8-3 win over 2019 Pan American Games bronze medal winner.

Round of 16 – df. Mikyay Saim NAIM (BUL), 3-3 (last point)
After exchanging shot-clock points with 2020 Bulgarian champion, Abe surrendered a double-leg takedown midway through the second period, regaining the edge with a go-behind takedown for a 3-3 last-point win.

Quarterfinal – Lost to Suleyman ATLI (TUR), 5-2
Exchanging points off the shot clock, 2019 world silver medalist Atli dropped Abe for a takedown and a 3-1 lead with 58 seconds remaining. Atli was hit with another stalling point with 30 seconds remaining, but held on for 5-2 win.

Qualification – Lost to Irakli MTSITURI (GEO), 4-4, on criteria
Otsu held the early lead but came out on the short end of a late scramble with the 2019 European bronze medal winner.