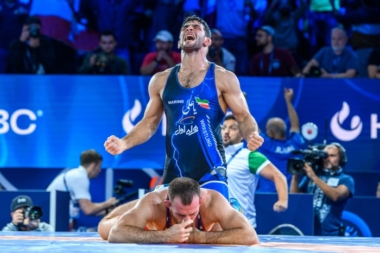 OSLO, October 3 – Hassan YAZDANICHARATI (IRI) was a man on a mission, seeking to reclaim his position in Iranian eyes as “The Greatest” by reversing a loss at the Tokyo 2020 Olympic Games to “The Magic Man,” aka gold medalist David TAYLOR (USA), on Sunday.

Backed by a vociferous crowd of Iranian supporters in Jordal Amfi Arena, Yazdanicharati scored a pair of force-out points in the first period of the 86kg world championship final. The two-time world champion took control in the second period with an ankle attack for two points and a single-leg for two more and a 6-0 lead.

Taylor managed to get two points back with a bodylock and takedown in the second period, but there was less than a minute remaining and Yazdanicharati was firmly in control of his eventual 6-2 triumph.

In the lone championship final that did not feature a Tokyo 2020 medalist, Abasgadzhi MAGOMEDOV (RWF) has won every event he has entered over the last two years and denied Daton FIX (USA) a chance to break that streak, firmly controlling the 61kg final for a 4-1 win and his first senior world crown.

In a bronze medal bout at 61kg, Toshihiro HASEGAWA (JPN) started slow, but rolled to a 12-1 win over Tuvshintulga TUMENBILEG (MGL), ending the bout at 5:35 for Japan’s first medal of the championships.

Earlier, in Sunday’s evening session, Iran advanced all four of its semifinalists to Monday’s gold medal matches and strengthening the freestyle team’s chances of walking away with the team title as well.