Oslo2021-Day4, Session7 / Young Duo Leads the Charge on the Second Day of Women’s Wrestling in Oslo 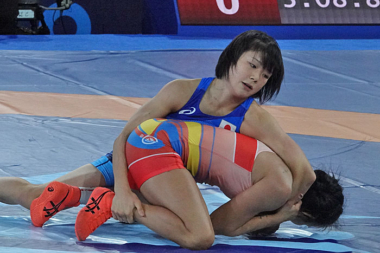 Yoshimoto and Fujinami were later joined in the semifinals by 2019 junior world champion Miwa MORIKAWA (JPN) at 65kg.

Yasuha MATSUYUKI (JPN), heavily bandaged around her knees, fell to Samar HAMZA (EGY) in the quarterfinals at 76kg.

QF – Luisa VALVERDE MELENDRES (ECU) tried her best to slow the Japanese phenom down, but eventually fell 10-0 at 3:44.

QF – Morikawa broke a 2-2 tie with a low single for two points and went behind for another two for a 6-2 win over Aina TEMIRTASSOVA (KAZ).

QF – Matsuyuki struggled against Samar HAMZA (EGY), but could not find the answer to getting over a 2-3 deficit.

In repechage bouts left from Monda

Ishiguro led, 4-3, midway through the second period over Tokyo 2020 Olympian Aleksandr HUSHTYN (BLR), and continued to hold the advantage when Hushtyn evened the score at 4-4. Hushtyn, however, kept the pressure on for one more point in the closing seconds for the win a berth in the bronze medal final.