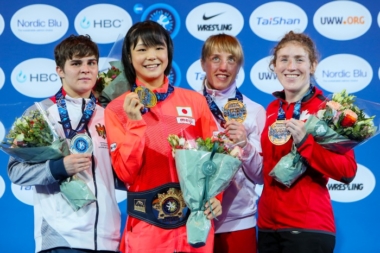 OSLO, October 6 – Remina YOSHIMOTO (JPN) and Akari FUJINAMI (JPN) added their names to the ever-growing list of women’s wrestling world champions on Wednesday as the Japanese squad appears on track to bagging yet another world team title.

With one full day of medal finals in women’s wrestling remaining at Jordal Amfi Arena, Japan still has Akie HANAI (JPN) and Masako FURUICHI (JPN) in line for a title shot on Thursday.

Tsugumi SAKURAI (JPN), another national team newcomer, snared the first gold medal of these championships for the Japanese women on Tuesday.

On Wednesday, Yoshimoto gutted out a 5-3 win over Tokyo 2020 bronze medalist Sarah HILDEBRANDT (USA) for the 50kg crown, while 17-year-old Fujinami appeared to glide her way to a 10-0 technical fall over Iulia LEORDA (MDA).

With the medal matches for the final four women’s weight categories Thursday, Japan currently enjoys a total of 116 points with three champions, followed by the United States with 95 points and one champion in Adeline GRAY (USA), who bagged her sixth overall world title Wednesday evening.

Nanjo grabs a 4-1 lead in the first period with a standing gut wrench while falling out of bounds. Tokyo 2020 bronze medalist Maroulis takes the lead with a takedown and a point for fleeing, and holds on for the win. Anshu, also a Tokyo 2020 Olympian laid an 11-0 technical fall on European champion Solomiia VYNNYK (UKR).

Hanai scores an early takedown and makes it stand through most of the bout, then runs over Nelson late for two more points to secure the win. European champion Dudova edged Asia champion Sarita for a berth in Thursday’s gold medal final.

Miyaji stopped a takedown attempt by Tokyo 2020 gold medalist Stock Mensah and flipped the Olympic champion to her back for a fall in 21 seconds. Velieva appeared to be the winner in her semifinal, but officials pointed to a mistaken rule interpretation and awarded the win to Tokyo bronze medalist Zhumanazarova.

Furuichi jumped out to a 4-0 lead on two early takedowns, then went into “match management” mode to hold onto a ticket to Thursday’s gold medal round. Asian runner-up Bakbergenova rolled up a technical fall against former world champion Cavusoglu Tosun (TUR).