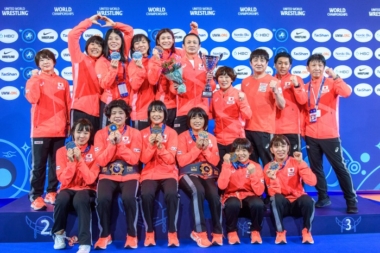 Furuichi’s win, coming on a single takedown and force-out, gave Japan its fourth individual women’s title at Jordal Amfi Arena in Oslo and lifted Japan to a convincing 196-147 win over the United States in the final team rankings.

It also helped mask some of the disappointment of earlier losses by Akie HANAI (JPN) and Rin MIYAJI (JPN), newcomers to the senior national team, who appeared cautious and tentative under the bright lights of a senior championships.

At 59kg, four-time senior European champion Bilyana DUDOVA (BUL) kept Akie HANAI (JPN) tied up with arm control throughout much of their gold medal bout, scoring with an early 4-point body drop and a two-point takedown for a 6-4 win.

At 68kg, Tokyo 2021 bronze medalist Meerim ZHUMANAZAROVA (KGZ) flattened Rin MIYAJI (JPN) for the fall at 2:12 of their championship bout for the Oslo 2021 gold medal.

Miyaji, who stunned Tokyo 2020 Olympic champion Tamyra STOCK MENSA (USA) with a quick pin on Wednesday, could not find the kind of daring she had the day before in the semifinals.

Stock Mensa, for her part, wrestled for the bronze medal against the dangerous Adela HANZLICKOVA (CZE) and grabbed 12-1 win.

In Thursday’s fourth championship bout, Rio 2016 gold medalist Maroulis slipped behind for a takedown to open the second period, then cranked challenger Anshu ANSHU (IND) over for the fall at 4:00 minutes. The triumph was the third overall world championship title for Maroulis after taking crowns in 2015 and 2017.

In the women’s first bout of the evening, Sae NANJO (JPN) was tentative over the first five minutes of her bronze medal match at 57kg, but combined a takedown to nearfall position near the end and held on for a 5-3 win and a bronze medal.

In the evening’s first bout, Ken MATSUI (JPN) was dropped to his back early in the first Greco-Roman semifinal. The judges ruled, however, that Azizli’s grip was too low on the hips and gave Matsui an early 4-0 lead.

With his opponent panicked, Matsui rallied and dropped 2018 world champion Azizli to his back for the fall and a berth in Friday’s gold medal finals.