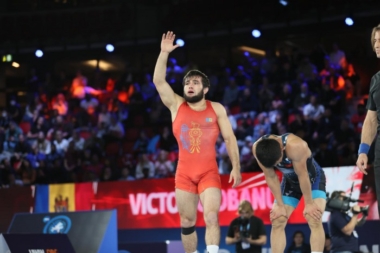 Ciobanu broke a close match open with a reverse lock around the shoulder blades of Sharsenbekov for a 4-point throw and a 5-3 lead. He also received points for a head butt from his opponent and a lost challenge for a 9-3 final tally.

With the victory, Ciobanu became the first wrestler to win a world championship title for Moldova.

Sargsian launched a five-point throw in the first period against Kakhelashvili on his way to a 6-0 win. Hancock built a 3-0 lead in the first period, but early in the second period, Oehler appeared to break or severely injure his ankle, resulting in an injury default.

\Junior and U23 world champion Yousofiahmadchali pressured European bronze medal winner Gedekhauri around the ring throughout their sumo-like finale to claim a 5-1 win.

Tokyo 2020 silver medalist Kajaia grabs a 2-1 win over Yildirim without an active point being scored. Marvik wins one for the home crowd, taking a bronze medal on criteria over a hobbled Acosta Fernandez.

(For Medal Matches on Sunday)

Tokyo Olympian Maskevich uncorked a pair of throws in his semifinal bout with on his way to a win by fall. Meanwhile, Tokyo bronze medalist Datunashvili hammered out a 5-1 win over junior European champion Bisultanov.