Hideaki TOMIYAMA was named as the new president of the Japan Wrestling Federation following the resignation of longtime president Tomoaki FUKUDA, it was decided at a meeting of the board of directors on Oct. 1 in Tokyo.

Executive director Masaki ETO also resigned, and was replaced by Nobuo FUJISAWA. Both Tomiyama and Fujisawa previously held the posts of vice-president. 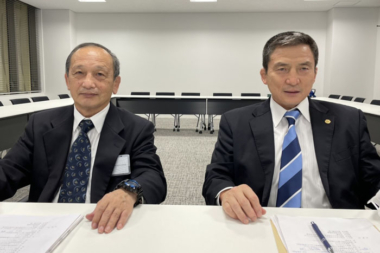 Tomiyama, 63, becomes the eighth president since the establishment of the federation in 1932. He was a world champion in 1978 and 1979 and gold medalist at the 1984 Los Angeles Olympics at freestyle 57kg.

Fujisawa, 68, won silver medals at both the 1978 and 1979 world championships at freestyle 48kg. He will also serve as a vice-president.

Fukuda, 79, indicated his intention to resign from the presidency that he had held since 2003 when reelection for executive posts was held in June this year. But given his long years of devotion to the advancement of the federation, a majority of the board was of the opinion that he should finish with the glory of the Tokyo Olympics, and he accepted a 10th term under the condition of leaving after the Olympics.

After the Olympics ended, he submitted his resignation to the federation, and Eto, 67, joined him in handing over the reins to a new generation.

“Since becoming president in 2003, I have diligently fulfilled the duties of president for 18 years. I would like to take this opportunity to express my deepest gratitude to you,” Fukuda said in a statement released by the federation.

“The Tokyo Olympics marks a place to make a clean break, and I hope the new administration will work hard to meet expectations for the Paris Olympics just three years away. In order to keep the tradition of Japanese wrestling known to the world, new blood in the organization is necessary. As such, I have decided to resign as president. I ask for your continued support for the Japan Wrestling Federation.”

Earlier this year in April, Shiotani won the gold medal at the Asian Championships which, at 19 years 5 months 17 days, made him the youngest Japanese male to win a continental title. 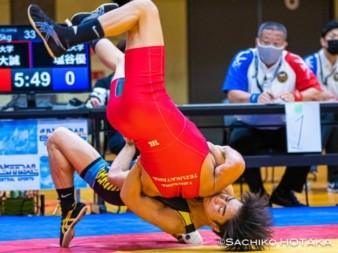 Takushoku sophomore Yu SHIOTANI won his second straight title at the All Japan Collegiate Greco-Roman Championships, the day after his top rival won the world title.=photo by Sachiko Hotaka

Shiotani eclipsed the previous record of Takashi KOBAYASHI, who won a freestyle gold at the 1982 Asian Games at the age of 19 years 6 months 13 days. Kobayashi went on to win a gold medal at the 1988 Seoul Olympics.

Oddly, the day before Shiotani’s triumph, Ken MATSUI of Nippon Sports Science University became Japan’s youngest-ever Greco-Roman world champion when he won the title in the same weight class in Oslo, Norway. Matsui was 20 years 8 months 23 days on the day of his triumph.

A battle between the holders of the Japan records for youngest-ever Asian champion and youngest-ever world champion could become a reality at the All Japan Championships on Dec. 16-19 in Tokyo.

Nippon Sports Science University, which had five champions, won the team title for the first time in two years and 21st overall.

The men’s freestyle competition at the National Collegiate Championships, originally scheduled for August but postponed due to a nationwide surge in coronavirus infections, was held Oct. 13-14 at Tokyo’s Komazawa Gym. 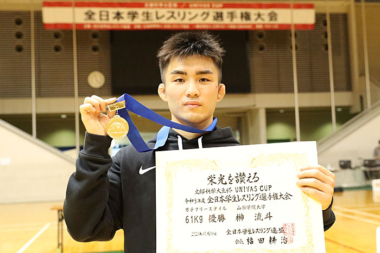 Yamanashi Gakuin University’s Ryuto SAKAKI returned from neck surgery in April to win the 61kg title. It was Sakaki’s first competition since winning the bronze medal at the Asian Championships in February 2020.

Satoshi MIURA of Takushoku, who placed seventh at the 2019 Asian cadets, won the 92kg title to become the 36th freshman champion in the tournament’s history.

Meanwhile, with the daily number of infections greatly abating, the Greco-Roman and women’s competitions have been rescheduled for November 4-5 in Yamaguchi Prefecture. 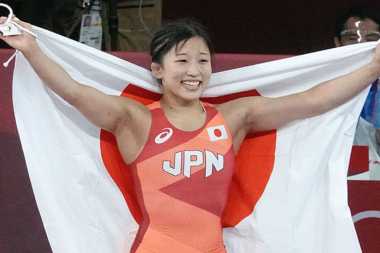 Yui SUSAKI will take the international stage off the mat as a member of the UWW Athletes Commission.

Susaki, a Waseda University student who won the Olympic gold at women’s 50kg, becomes the first Japanese member of the commission since Kaori ICHO served from 2013-2017.

“It is an honor to be selected,” said Susaki, who was notified by email. “I will give everything I have in doing what I can. I hope I can serve as a bridge linking UWW with Japan and Asia.”

As for the problematic point of communicating in English, the 22-year-old Susaki said, “I will study as hard as ever.”

Newly elected JWF President Hideaki TOMIYAMA commented, “It is promising to see young talent come along who can make a mark on the international stage. It’s good to go out into the world from a young age. I want her to diligently learn English and take with her an awareness of being active on such a stage in the future.”