Veteran Sohsuke TAKATANI is the lone Tokyo Olympian entered in the 2021 Emperor’s Cup All-Japan Championships, to be held Dec. 16-19 at Tokyo’s Komazawa Gym, according to the entry lists announced Nov. 30.

All of the 11 others who competed at the Tokyo Olympics, including five gold medalists, opted to bypass the tournament, which will serve as the first of two qualifying events for the 2022 World Championships. The winners will also qualify for the 2022 Asian Games. 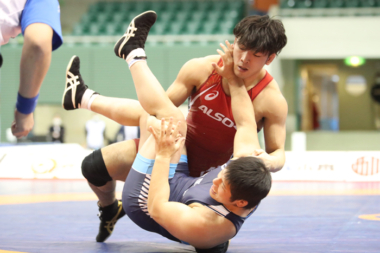 Takatani, who appeared at the Olympics in the freestyle 86kg class, is entered at 92kg, in which he is the defending champion. The Kyoto Prefecture native currently is on a streak of 10 straight titles — won in four weight classes (74kg, 79kg, 86kg, 92kg) — and will aim to become the fifth wrestler in history to capture 11 national crowns and the third to do it in consecutive years.

While the Olympians will be absent, the vast majority of national team members from this year’s World Championships in October in Oslo will be taking the mat. Tsugumi SAKURAI, the world gold medalist at women’s 55kg, has moved up to 57kg, while 72kg champion Masako FURUICHI has dropped to 68kg.

Either could clash with fellow world medalists at their new weights. Sakurai could face a showdown with world 57kg bronze medalist Sae NANJO, while Furuichi’s path to the title could be blocked by 68kg silver medalist Rin MIYAJI, who pulled off one of the biggest upsets in Oslo with 21-second fall in the semifinals over Tokyo Olympic champion Tamyra MENSAH STOCK (USA). 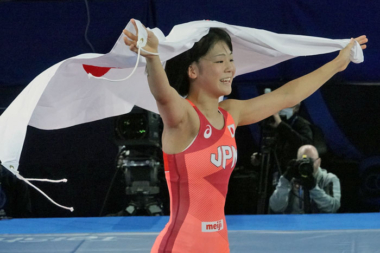 Teen phenom Akari FUJINAMI, coming off winning the senior world title, will be defending her title at women’s 53kg.

Aiming to defend her title at women’s 53kg will be 18-year-old phenom Akari FUJINAMI, the high schooler who took the world by storm by winning the senior world gold with four straight technical fall victories without surrendering a point.

At last year’s Emperor’s Cup, Fujinami knocked off 2018 world champion Haruna OKUNO and 2019 world 55kg silver medalist Nanami IRIE, and both are entered again this year and and will be looking for revenge. Fujinami currently has an 83-match win streak and has not lost since June 2017.

Another newly crowned world champion, Remina YOSHIMOTO, will be looking to win a second straight national title at 50kg.

In freestyle, world 61kg silver medalist Toshihiro HASEGAWA has dropped to 57kg, where he could possibly clash with Toshiya ABE, who finished seventh in Oslo. Former Olympic medalist Rei HIGUCHI has moved back up to freestyle 61kg.

Conversely, 2016 Rio Olympic silver medalist Rei HIGUCHI has moved back up to 61kg from 57kg, following his unsuccessful attempt to qualify for the Tokyo Games at that weight when he lost a playoff with Yuki TAKAHASHI.

Making weight at 57kg was a constant struggle for Higuchi and the move up to 61kg was only natural. Higuchi will be aiming for his first national title since 2019 and fourth overall.

The champions will earn places on the team to the Asian Games to be held in September next year in Hangzhou, China. They can also secure tickets to the World Championships in September in Belgrade, Serbia, by also winning the title at the Meiji Cup All-Japan Invitational Championships in June. If they fail to win that title or do not compete, then they will face the Meiji Cup winner in a playoff for the world team spot.

Because the Asian Games and World Championships are so close to together on the schedule, qualifiers for both tournaments will be encouraged to participate in the former, but will have the option of entering just the World Championships if they wish.

Shigakkan University’s Remina YOSHIMOTO, coming off of her gold medal-run at 50kg at the World Championships, had little trouble moving up to 53kg and taking home the title in the women’s competition of the All-Japan Collegiate Championships, held Nov. 4-5 at the Shunan Sports Center in Yamaguchi Prefecture. 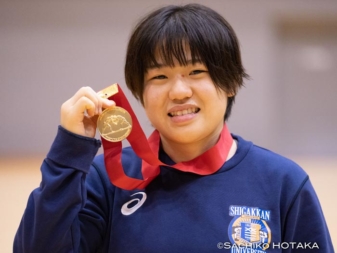 In Greco-Roman, Asian 55kg champion Yu SHIOTANI of Takushoku University moved up to 60kg, but was defeated in the final by Nippon Sports Science University’s Kaito INABA.

The tournament had originally been scheduled for August in Tokyo, but was postponed due to a surge in coronavirus infections. It was then rescheduled for November and moved to Yamaguchi Prefecture.