Former Olympic champion Eri TOSAKA was named to United World Wrestling’s Gender Equality Commission, which is aimed at increasing opportunities for women and achieving gender equity, the world governing body of the sport announced on Jan. 24.

Kuninori KOIKE was named to the Refereeing Commission as the UWW filled out openings on various panels. 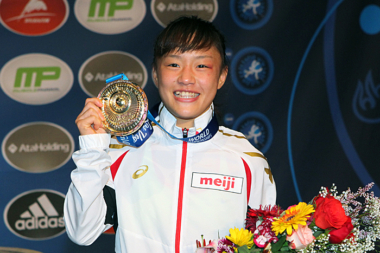 Eri TOSAKA, showing off her gold medal at the 2015 World Championships, was named to the UWW Gender Equality Commission.

“It’s an honor to be selected,” Tosaka, 28, said in a statement. “I have not yet been told what the commission’s task is, so I’m not exactly sure what I should do. But I will do everything I can to help correct the gender gap between men and women.”

Tosaka, who married in August 2020 and gave birth to a baby boy last summer, preceded Susaki as Olympic champion in the lightest women’s weight class, winning the 48kg gold at the 2016 Rio Olympics. Now she sees the two of them providing the impetus for more Japanese women to serve roles in helping the sport progress.

“With Yui Susaki and me being named to UWW commissions, I hope many female executives from Japan will be named by the UWW,” said Tosaka, who also won three consecutive world titles from 2013 to 2015. 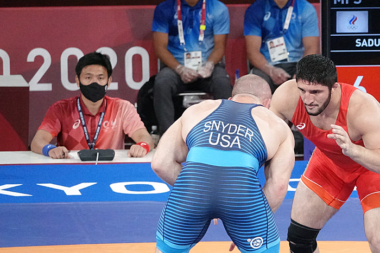 Kuninori KOIKE serves as the side judge for the 97kg freestyle final between Abdulrashid SADULAEV (RUS) and Kyle SNYDER (USA) at the Tokyo Olympics.

Koike, a teacher at Tenri Kyoko Gakuin High School in Nara Prefecture, officiated at his first Olympics at last summer’s Tokyo Games. He has also appeared at four world championships, in 2017, 2018, 2019 and 2021, and received the Golden Whistle award in 2019.

“Having been put into such a position of responsibility like this, I will make every effort for the further development of Japanese wrestling,” Koike said. “So many of my predecessors made their mark on the world stage, earning Japan a reputation of high-level refereeing that has long continued. I will firmly carry on the image of fairness and impartiality.

“In addition, I will put my whole heart into conveying the appeal of wrestling in an easy-to-understand manner, so that we hear more voices declaring, ‘I want to watch wrestling!’ ‘Wrestling is fun!’ ‘I want to try it! ‘Let me try it!’

At one point, total daily infections of coronavirus nationwide had dropped below 100 and hopes were high for the country to see the light at the end of the tunnel. But that all changed entering the new year, when the omicron variant spread rampantly.

No part of the country was unaffected by the scourge, from large cities to rural areas, with new records set daily as the count soared into the tens of thousands. Even a national champion and a federation official tested positive as the wrestling schedule took its latest hits.

While there were no national training camps planned for January, wrestlers had been working out with their respective teams ahead of a planned joint camp for the three styles from Feb. 19. However, because of the surge in infections, many teams have been forced to cancel practices.

Among tournaments immediately affected, the national boys and girls invitational, scheduled for Jan. 29-30 in Tokyo, was postponed to Feb. 26-27, while the U13 Japan Open, originally scheduled for the latter date

As it stands now, the champions from the All-Japan tournament in December will comprise the team to the Asian Championships to be held in April in Ulaanbaatar, Mongolia. There are two national team camps scheduled in February and March in preparation, although the February camp looks to be in jeopardy. 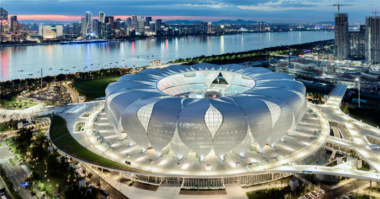 The Hangzhou Olympic and International Expo Center, the venue for the Opening Ceremony of the 2022 Asian Games. (photo from official Asian Games website)

Currently in Japan, anyone returning from overseas is required to self-quarantine for two weeks after arrival, which means that wrestlers would not be able to practice with their teams during that time. Because of that pre-condition, Japan has not entered any competitions overseas or taken trips for training this winter. Team members for the Asian Championships will prepare by practicing domestically.

The reigning national champions also earned the right to represent Japan at the Asian Games, to be held in September in Hangzhou, China, where the competition is limited to the Olympic weight classes. The second domestic qualifier for the World Championships, also to be held in September, will be the Meiji Cup All-Japan Invitational Championships in June. If the national champion wins at the Meiji Cup, they will earn the ticket to the Belgrade worlds; if they lose, it will set up a playoff between them and the Meiji Cup winner for the spot.

However, because of the proximity of the World Championships and Asian Games on the schedule, it can be expected that pandemic-related restrictions could make it impossible to travel from Serbia to China in time. Because of that, the federation has notified the wrestlers that they will have to limit their participation to one of the events.

Given the impending deadline for entries for the Asian Games — officially at the end of May, although the Japan Olympic Committee has set its own deadline of late April — national champions who opt to go to that tournament will have to give up their place for the World Championships should they also triumph at the Meiji Cup.

The Asian Games team members is expected to be announced shortly.