Note: Reports on the Meiji Cup in June were written separately for each style and have already been posted.

The Asian U17 Championships were held June 19-22 in the Kyrgyzstan capital of Bishkek. It was the first time Japanese wrestlers had been entered in a non-senior age group tournament since the Asian U15 Championships in Taiwan in November 2019.

In freestyle, Shingo ANDO won the gold medal at 71kg in his first-ever international tournament with three victories by decision, capped by a 4-2 win in the final over Narender NARENDER (IND).

It marked the third time in row that Japan had a freestyle champion at the Asian U17, following victories by Hayato FUJITA at 55kg in 2018 and Kota TAKAHASHI at 60kg in 2019. The tournament was canceled in 2020 and 2021 due to the pandemic. 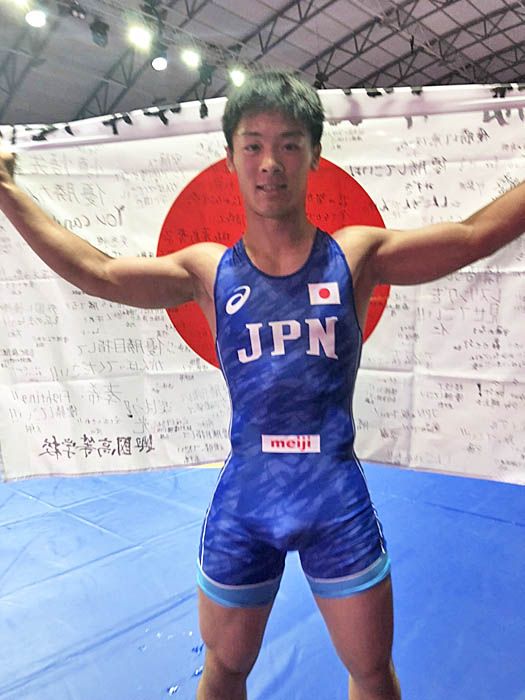 Shingo ANDO’s victory at 71kg gave Japan a freestyle title for the third tournament in a row at the Asian U17 Championships.

“I’m really happy,” said Ando, of Kokuku High School in Osaka. “It was because of the people who supported me. The key to the victory was that I fought with the determination that I was definitely going to win. I was able to use the tackle that I have been doing since I was small.”

Japan also got a silver medal from Leo AKAGI at 48kg and bronze medals from Minato IWAI at 60kg and Yujin TAKIZAWA at 65kg to place fifth in the team standings. The result exceeded that of the 2019 Japan squad, which won one gold and placed sixth.

The girls’ tournament was dominated by India with eight of 10 golds, and the Japanese team finished as runner-up with four silver medals and two bronze medals. It was the first time since this age group tournament was started in 2003 that the Japanese girls failed to take home a gold.

“Many times the Japanese wrestlers were countered on their tackles, were shut down by strength, and when on bottom, were quickly powered over,” team coach Mitsuko FUNAKOSHI said.

Given the prospect that India could take this momentum right up to the U20 and senior levels, and anticipating the eventual return of China which skipped the tournament, Funakoshi noted, “An even tougher fight awaits ahead.”

In the Greco-Roman competition, Daisuke MORISHITA won Japan’s lone medal by capturing a bronze at 51kg. Japan finished seventh in the team rankings, a step down from 2019 when the squad finished sixth after winning three bronzes. 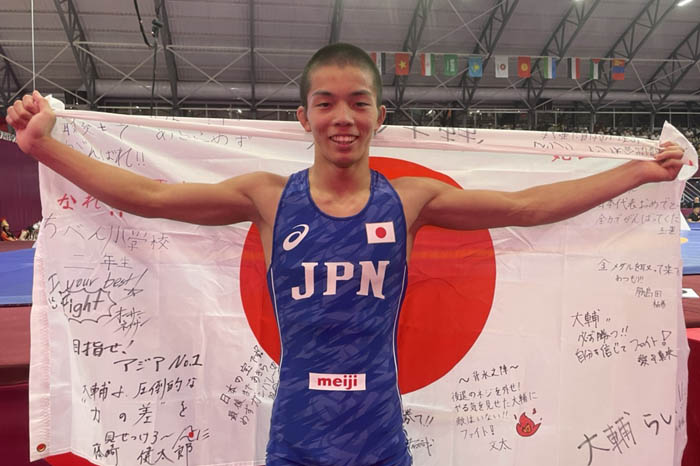 “I want to express my gratitude for sending the team despite the difficult circumstances [due to the coronavirus],” team leader Hiroshi MORISHITA said. “It was good that nobody get infected and we all returned home safely.”

Regarding the girls behind shut out of the gold medals, Morishita said with visible regret, “I am sorry that we were unable to have any champions.” Saying the federation would look closely into the reason for India’s success, he said, “I want us to think of ways to compete that bring out the best in Japan.”

Meanwhile, Khaliun BYAMBASUREN, who was raised in Japan and attends Shigakukan High School in Aichi Prefecture, competed in the girls tournament for Mongolia at 53kg. She won both of her group matches and her semifinal with 10-0 technical falls in the first period, but finished with a silver medal after losing 10-6 in the final to the Indian wrestler. 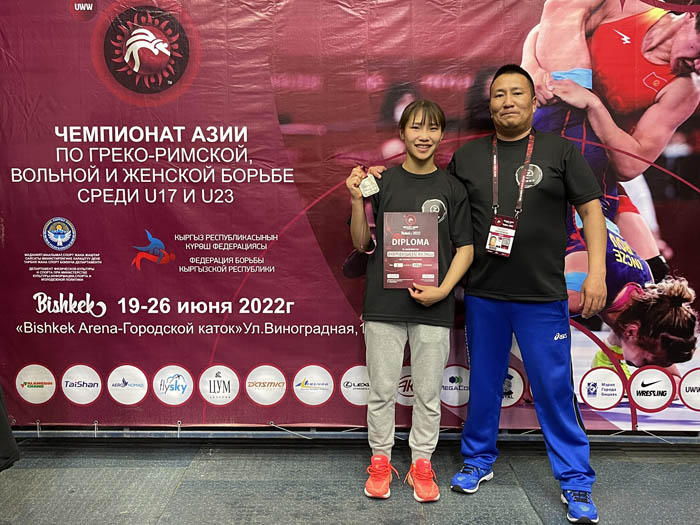 Khaliun BYAMBASUREN (MGL), who was raised in Japan and attends Shigakukan High School, poses with her father, the vice-president of the Mongolian federation, after winning a silver medal at 53kg.

Minoru IIZUKA, a two-time Asian Games champion who finished fifth at the 1956 Melbourne Olympics in the freestyle bantamweight (57kg) category, has died. He was 89.

The Meiji University wrestling team announced on June 6 that Izuka passed away on May 29. The cause of death was not announced. 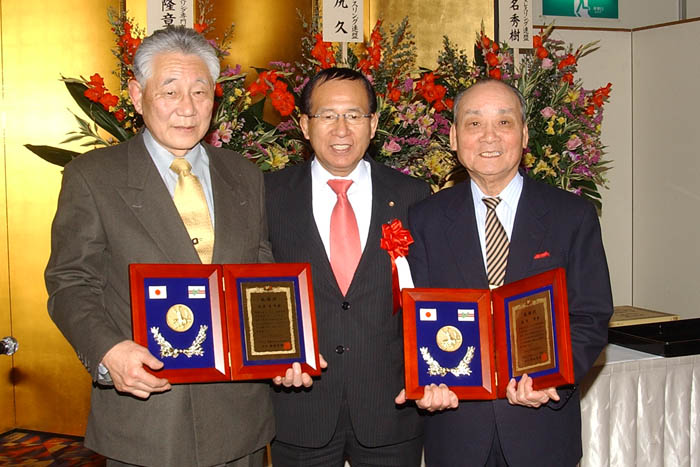 At the 1956 Melbourne Olympics, Iizuka lost by 3-0 decision in his opening match to 1954 world champion and eventual gold medalist Mustafa DAGISTANLI (TUR) and even though he did not lose again after that, he had to settle for fifth place.

At the time, the Olympic tournament was run using the “bad points” format, with a wrestler who accumulated five points eliminated from the competition. Only a victory by fall earned no points; a victory by decision was one point; and a loss was three points.

Iizuka won his next two matches, including one by decision, putting him at four points. In his fourth match, he defeated LEE Sang-Gyun (KOR), but because it was by decision, it gave him five points and knocked him out of the medal hunt.

Iizuka retired after winning his second Asian Games gold medal and returned to his home prefecture of Niigata. He later served as chairman of the prefectural wrestling federation.