(By William May ／ wm4wr@outlook.com) 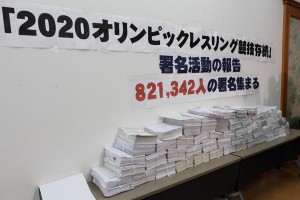 Leaders of the organization said they expect the total number of signatures gathered from throughout Japan to total around 1 million in about one week since "a number of the signees are still holding onto their petitions."

The JWF will send the signatures to wrestling's international governing body, FILA, in hopes that the International Olympic Committee (IOC) will hear the voices of wrestling fans and everyone associated with wrestling.

"The Society to Preserve Wrestling in the Olympic Games" sent out the call nationwide for signatures and the call has been met with the positive activities of a wide range of organizations such as local and prefectural wrestling associations, university, high school and middle school wrestling clubs, kids wrestling schools, businesses associated with the JWF, as well as professional wrestling and professional martial arts organizations.

The Society also organized signature gathering events with Japan's wrestling gold medalists from the London 2012 Olympic Games in the trendy Omotesando district of Tokyo as well as at the arenas hosting events of the New Japan Pro Wrestling organization.  All of the events were covered  by the major media organizations in Japan and aroused national interest.

With more than 820,000 signatures, JWF President Tomiaki Fukuda said "The (original) goal was 100,000, so I am surprised by this number of signatures." 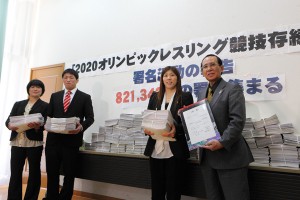 Fukuda added: "And even today, more signatures are coming in.  I expect that it will be close to 1 million.  We will send the signatures to FILA and we want FILA to tell the IOC that with this kind of support we want to remain in the Olympics."

Yuji Takada, JWF executive director, said "This number of signatures is evidence that wrestling is loved. I have told the wrestlers 'believe that wrestling will remain (in the Olympic Games) and keep working hard.' I am so encouraged by these results."

Tatsuhiro Yonemitsu, men's freestyle gold medalist at 66kg at the London 2012 Olympic Games, said "I have helped with this signature drive in Omotesando, at New Japan Pro Wrestling events, with the Japan Self-Defense Forces, and near my home in Niiza, but I never thought we could collect this many.  To all the people who gave us their signatures, we are thankful.  There are no words to express how thankful we are."

Saori Yoshida, three-time Olympic gold medalist at 55kg, said "I helped collect signatures at a little kids wrestling school in Shizuoka and at Shigakkan University. I am really surprised with this number.  I am so happy that we even received the support of people who don't know much about wrestling. This type of campaign is impossible for one person alone.  It was accomplished with people joining together with other people. We want wrestling resurrected as an Olympic sport."

Hitomi Obara, gold medalist at 48kg in women's freestyle at the London 2012 Olympic Games, said "We received the signatures of so many cheerful, willing people, I am filled with gratitude.  I want to be active believing that wrestling will be resurrected as an Olympic event. Wrestling has continued from the ancient Olympics. Wrestling is loved by everyone and fills the dreams of the children. I want to preserve this tradition."