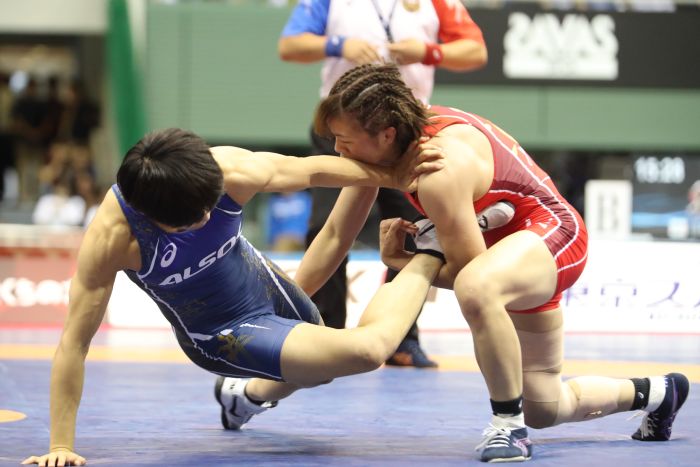 TOKYO—Risako KAWAI went on the attack and came out on top of her latest showdown with fellow Rio Olympic champion Kaori ICHO, winning 6-4 in the women’s 57kg final at the Meiji Cup All-Japan Invitational Championships.

Kawai’s victory on the final day of the four-day tournament June 13-16 set up another clash with Icho in a playoff on July 6 for the spot on Japan’s team to the World Championships in Kazakhstan in September.

Icho had beaten Kawai in the final in December at the Emperor’s Cup All-Japan Championships, the first of the two qualifying tournaments for the national team.

“Six months ago in December, I didn’t have the courage to go on the attack,” said Kawai, who earned the Meiji Cup as the tournament MVP. “Since that time, I anguished less over the fact that I lost and more about why I didn’t wrestle the way I wanted to. The big issue was the mental aspect. I feel I’ve grown from that standpoint.”

Kawai, the Rio champion at 63kg and current world champion at 59kg, moved down to the Olympic weight class of 57kg, putting her on a collision course with Icho, whose victory at 58kg in Rio gave her an unprecedented fourth Olympic gold medal.

In the final at Tokyo’s Komazawa Gym and before a national TV audience, Kawai built a 5-0 lead before Icho stormed back, pulling to within 1 point when Kawai was penalized for fleeing with 2.5 seconds left.

Icho made a last charge for the winning point, but just failed to beat the clock in forcing Kawai over the edge. An unsuccessful challenge made the final score 6-4.

“Looking ahead to the playoff, I’ll reflect on what went wrong today and make the necessary changes,” said Icho, who returned to competition last September for the first time since the Rio Olympics. “I don’t have time to feel depressed.”

Icho, who had to settle for the bronze medal at the Asian Championships in April, had survived a scare in the semifinals, when she levered Sae NANJO over after being taken down to win 3-3 on last-point criteria. 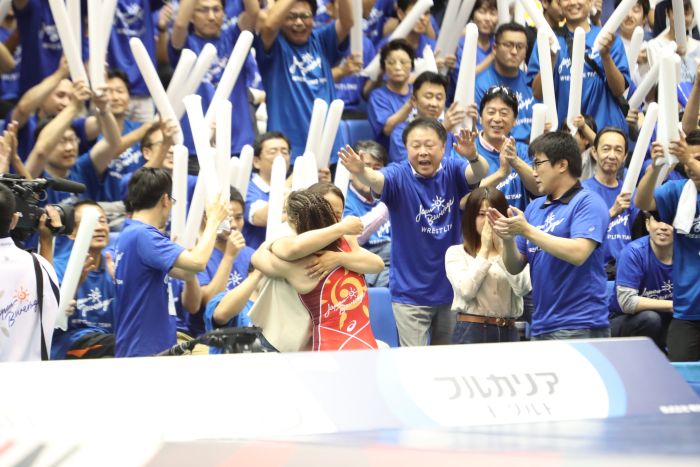 Risako Kawai and her mother hugged each other after winning

Meanwhile, reigning world champions Yui SUSAKI and Takuto OTOGURO will also need to win wrestle-offs to get a chance to defend their world titles, but took vastly different routes to that stage in the process, which also has ramifications regarding the 2020 Tokyo Olympics.

Susaki, who missed the Emperor’s Cup due to an elbow injury, cruised to a 10-0 technical fall victory in 1:36 over Rio Olympic gold medalist Eri TOSAKA to capture the women’s 50kg title.

“She was an athlete that I had always looked up to,” said Susaki, who will turn 20 on June 30. “After the Rio Olympics, that changed to wanting to beat her. I was very happy that the timing was right that I could face her here. I wanted to firmly defeat her and complete the generational change. That strong feeling led to this victory.”

Susaki survived a major scare in her opening match in the quarterfinals, when she scored a miraculous 4-point takedown with 2 seconds left to stun Emperor’s Cup champion Yuki IRIE, 6-2.

Susaki and Irie, the gold medalist at the Asian Championships in April, will meet in the playoff for the world team spot in a repeat of 2018, which Susaki won before going on to successfully defend her world title in Budapest. 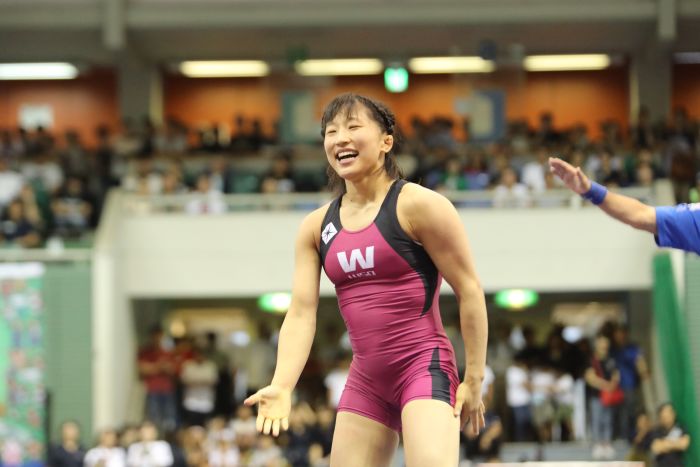 Otoguro, who became at 19 years 10 months the youngest male world champion in Japanese wrestling history when he won the gold in Budapest, had been plagued recently with a knee problem that caused him to miss the Freestyle World Cup and Asian Championships.

Limited preparation seemed to take its toll when Otoguro, the Emperor’s Cup champion, was dealt a 15-5 technical fall loss in 5:23 in the freestyle 65kg final by Rei HIGUCHI, the Rio Olympic silver medalist at 57kg who captured the first Meiji Cup title of his career. It was Otoguro’s first loss to a Japanese opponent since junior high school.

Otoguro had gotten the best of Higuchi in recent years, and will now have to do so again in the playoff to make the team to the Kazakh capital of Nur-Sultan. 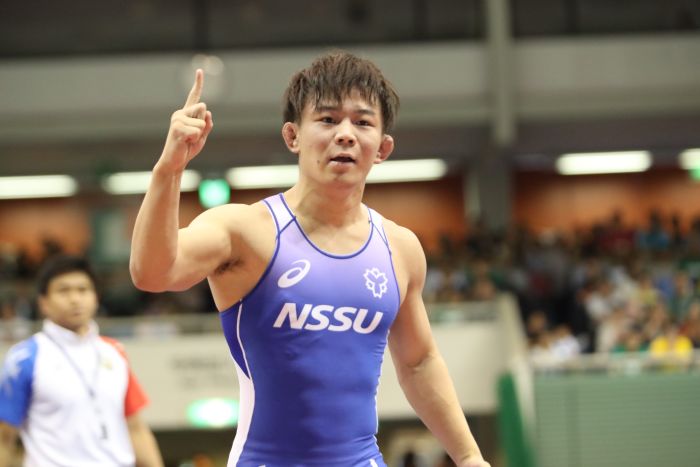 In other action involving high-profile wrestlers, former world champion Kenichiro FUMITA came out on top in his latest clash with rival and Rio Olympic silver medalist Shinobu OTA, winning 4-1 in the Greco-Roman 60kg final for his third title overall and first in two years.

Fumita withstood Ota’s deadly front headlock throw attempt from the ground position, then managed to roll Ota when it was his turn on top. Fumita then narrowly avoided a step-out by shrugging Ota aside and gained the point himself to clinch his place on the plane to Nur-Sultan.

“It went as I imagined, in which neither of us was able to score on our feet,” Fumita said. “It would come down to the ground position. I didn’t know which one of us would be on bottom first, but I knew he would use the front headlock, and I knew I had to roll him at least once. For both of those points to happen made the match go as I wanted.”

The women’s 53kg weight class featured a battle between reigning world champions that Mayu MUKAIDA won 2-1 over Haruna OKUNO. After giving up a point on the activity clock, Mukaida spun behind for a takedown at the end of the first period for the decisive points.

Mukaida, who suffered a stunning last-second loss in the final at the Asian Championships to North Korea’s PAK Yong-Mi, played it safe in the second period to hold on for the victory.

Mukaida, the Budapest world champion at 55kg who moved down to the Olympic weight, has now defeated Okuno, the world gold medalist at 53kg, in all nine of their career meetings. 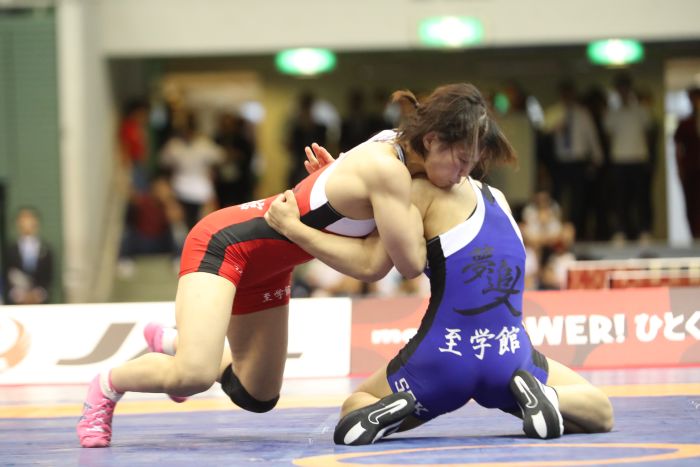 Minagawa, 31, held on for a 3-1 victory over the 17-year-old Kagami, avenging a loss by the same score the previous day in their preliminary round group that was her first to a Japanese opponent since 2013. Kagami won the Emperor’s Cup at 72kg and will thus enter the playoff at that weight class.

Yuki TAKAHASHI, looking to regain the world title he won in 2017 at freestyle 57kg after having to settle for a bronze last year, earned his ticket to Nur-Sultan with a 6-3 victory over Kaiki YAMAGUCHI in a repeat of the Emperor’s Cup final.

Sosuke TAKATANI, the 2014 world silver medalist at freestyle 74kg who has transitioned over the past two years to the next Olympic weight of 86kg, earned a chance at a world medal and Olympic berth at that weight when he outlassed Masao MATSUSAKA 8-0 in the final.

Rio Olympic champion Sara DOSHO, who had to abdicate the women’s world 68kg throne last year after undergoing shoulder surgery, is poised to regain the world title, although she needed a come-from-behind victory over Masako FURUICHI to do it.

Dosho trailed 3-2 with 11 seconds left in the final when Furuichi launced an ill-fated attack that Dosho countered and spun behind for a takedown and a 4-3 victory.

Yukako KAWAI, Risako’s younger sister, will get a chance to improve on her world silver medal from Budapest after she defeated high schooler and Asian champion Yuzuku INAGAKI 3-1 in the women’s 62kg final. 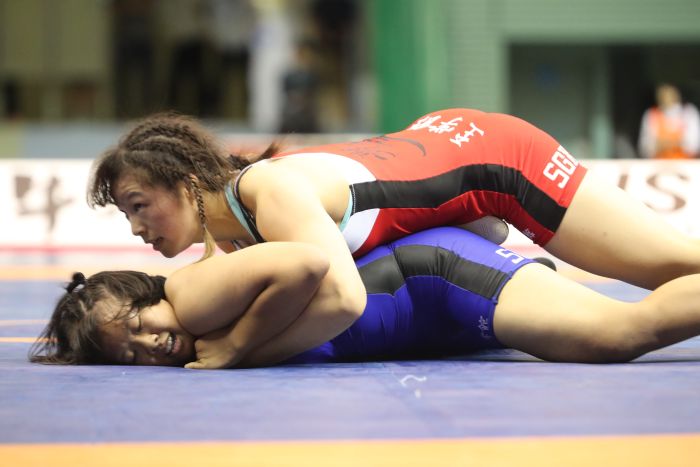 This year’s World Championships holds extra significance as the Japan federation has decreed that any wrestler winning a medal in Nur-Sultan, which is also serving as the first qualifier for Tokyo 2020, will automatically earn an Olympic berth.

For a weight class like the women’s 50kg, the likelihood of a medal is extremely high, as Japan has finished either first or second at the worlds in the lightest weight class every year dating back to 2010, as well as the last four Olympics.

For example, that would give Ota a chance to make the world team at 63kg, if he so chooses, or Okuno could move up to 55kg, the weight class in which she won the 2017 world gold.

Atsushi MATSUMOTO, the world and Asian bronze medalist at 92kg, took a shot at the Olympic weight of 97kg, but came up short of even winning a medal. Still, as the Emperor’s Cup winner at 92kg, he can enter the playoff in that division. And, should 97kg winner Naoya AKAGUMA not win a medal in Nur-Sultan, Matsumoto can launch another challenge.

Emperor’s Cup champion Yuhi FUJINAMI will need to take the playoff route back to the World Championships at 74kg if he wants to improve on his 2018 bronze medal at 70kg, after injuries scuttled his chances to clinch the berth.

Still recovering from a knee injury suffered at the Asian Championships, Fujinami suffered a back injury a week before the Meiji Cup. His limited movement played a factor as he succumbed by fall in 4:23 to Mao OKUI in the semifinals.

Okui went on to defeat Jintaro MOTOYAMA, last year’s Meiji champ at 70kg, 6-2 in the final to set up a rematch with Fujinami in the playoff. It remains to be seen whether three weeks will be enough time for Fujinami to fully recover.

In other weight classes, Yudai TAKAHASHI of Kyoto’s Amino High School became the first high schooler to win a title in the 23-year history of the Meiji Cup, capturing the non-Olympic weight of freestyle 79kg, which drew just four entries and was competed as a round-robin.

At 17 years 6 months, Takahashi eclipsed the record for youngest-ever champion set in 2013 by Daichi TAKATANI, who was a little over one year older. Ironically, NSSU freshman Nao KUSAKU’s 10-1 technical fall victory over Tomohiro INOUE in the Greco-Roman 72kg final the next day would have made him the new record-holder—by 6 days over Takatani.

With her victory at women’s 59kg, Yumeka TANABE joined father Chikara as a Meiji Cup gold medalist, making them the first father-child title tandam in tournament history. Chikara Tanabe won twice, in 1998 and 1999, at freestyle 55kg, and was the bronze medalist at the 2004 Athens Olympics.

Shohei YABIKU will have the momentum going into the Greco 77kg playoff after rolling to an 8-0 technical fall victory over Emperor’s Cup champion Naotsugu SHOJI in the final.

In the three heaviest Greco divisions, Masato SUMI (87kg), Yuta NARA (97kg) and Arata SONODA (130kg) all retained their titles and earn tickets to the World Championships. Nara won for the fourth straight year and Sonoda made it eight in a row.

World junior and U23 champion Saki IGARASHI, the Asian silver medalist, won her first title by taking the women’s 55kg gold, while Misuzu ENAMOTO’s victory at 65kg made her the first-ever champion from Okayama’s International Pacific University at the Meiji Cup and its predecessor, the Queen’s Cup.