With the full opening of society following an extended period of nationwide self-restraint to contain the spread of the coronavirus, the Japan federation resumed holding national team training camps at the Ajinomoto National Training Center in Tokyo for the first time in 3 1/2 months. 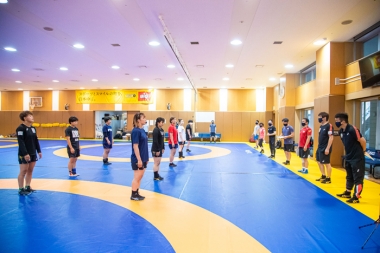 The women’s team, with limited numbers, had the first camp, starting on July 2, and the Greco-Roman squad followed from July 6. Each camp lasted seven days under strict protocols to establish a virus-free “bubble” at the NTC.

However, when the number of confirmed new cases of coronavirus in Tokyo surpassed 100 on successive days from July 2, leading to fears of the beginning of a second wave, it was decided to cancel the men’s freestyle camp that was scheduled to start July 22. Camps in each style scheduled for August were also abandoned.

In contrast to training camps in normal times, the women this time had just eight participants ― four of the five who have already qualified for the Tokyo Olympics (Risako KAWAI, Yukako KAWAI, Sara DOSHO and Hiroe MINAGAWA); Yui SUSAKI, who will enter the Asian Olympic Qualifying tournament at 50kg; and three others. It was the first time for the squad to gather since the last camp at the NTC on March 17-22.

Mayu MUKAIDA, newly graduated from Shigakkan University, was excused from the camp due to commitments with her new employer and corporate sponsor. 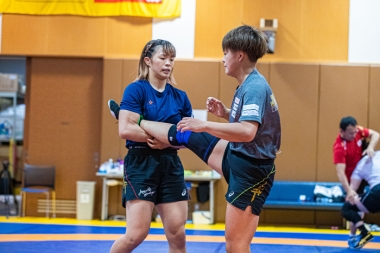 While the media was barred from entering the wrestling room to minimize contact, the initial practice session was streamed live on the internet, and each of the top wrestlers had a “press teleconference.”

All wrestlers and coaches underwent testing for antibodies (all tested negative). Upon entering the wrestling room, all had their temperature taken, and the soles of their wrestling shoes were disinfected in measures to keep the room as sterile as possible.

At this stage, wrestling practices around the country had not yet resumed or only just started, so the federation’s aim was basically to start slow and prevent injuries. The women’s first practice session contained no live wrestling at all and was dedicated to stretching and building up core muscles, followed by basic drills such as high single-leg takedowns and gut wrenches.

“There are cases when you suddenly start [hard] training and you tear an Achilles tendon,” said Hideo SASAYAMA, the women’s team technical development director. “As such, we toned things down this time.”

Fumita sees positive side of postponement

For the Greco-Roman camp, world champion and Olympic gold medal hopeful Kenichiro FUMITA was among 22 wrestlers who took part in the first national team practice since March 18-24. Like the women, all of the wrestlers and coaches tested negative for antibodies, and teleconferencing interviews were held afterward. 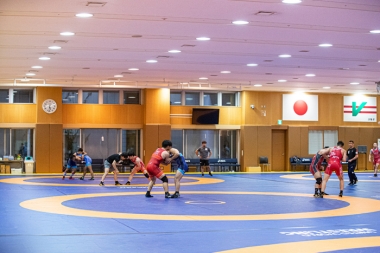 “Long time, no see,” were the first words uttered by Shingo MATSUMOTO, the Greco-Roman team technical development director in greeting the partipants.

Powerhouse Nippon Sports Science University, where Matsumoto is head wrestling coach and serves as a lecturer, had already resumed practice for current students and alumni. But for those in the Self-Defense Forces and other teams, it was Matsumoto’s first time to see them in over three months, and his face showed an expression of relief.

During the long months of self-restraint, when wrestling rooms and gyms were shuttered, Fumita was left to his own devices to develop a workout routine at home. Moving tables and a sofa to make space, he followed workouts devised by a trainer, or used exercises he learned on Youtube. “I’m glad I have the opportunity to put to use what I came up with,” Fumita said in showing his excitement at his first national camp in such a long time. 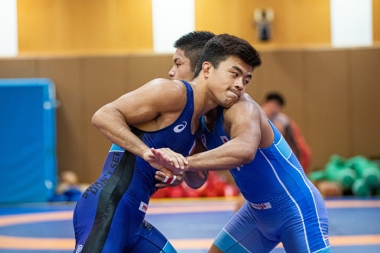 Fumita was concerned that the extended time away from the mat may have led to “losing my touch.” But once he got going, he found he was not so off form. No doubt his endurance and strength were not at high levels, but he had lost nothing in his arm throws and other techniques.

Fumita said he was shaken when he heard of the postponement of the Tokyo Olympics. “I wondered if I could maintain my motivation for another year,” he said. But after letting it sink in and looking at it calmly, he resolved to “improve myself over the year.”

As he never had any intention of retiring after the Tokyo Olympics, all the postponement did was change the timing of one of his objectives. “I’m not looking at it from a negative point of view,” he said. “If I properly prepare, I can win a gold medal whether it’s this year or next.”

Kanako MURATA, who famously gave superstar Saori YOSHIDA some of her toughest domestic matches before switching to mixed martial arts after failing to make the 2016 Olympics, signed a contract to compete in the Ultimate Fighting Championship, the largest promoter of MMA fights. 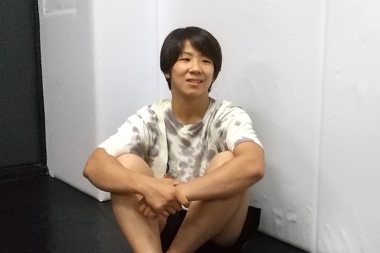 Murata, who won her lone national title at 55kg in 2012 (Yoshida skipped that tournament), had signed the deal in March, but because of the spread of the coronavirus, the opportunity to make an official announcement was not available. “It is finally hitting me now that the annoucement has been made,” Murata said.

When Murata came up short of making the Rio Olympics, she decided not to shoot for the Tokyo Games four years later. “If I had waited for Tokyo, I would have been 27 at the time,” she said. “I am not so skillful, and it would not be possible to then join MMA. If I was going to try something new, that was the right time to do it.”

Murata began her MMA career after graduating from Nihon University. She made her debut in April 2016 with a victory at a RIZIN Fighting Federation event. She found continued success and last year joined Invicta FC, a U.S.-based women’s MMA circuit. She became its strawweight champion, making her the second Japanese with a title.

Amid the global pandemic, UFC has held events with no spectators. Murata’s debut fight has not yet been set, but she is hoping for sometime after September.

It was at the 2013 Meiji Cup All-Japan Invitational Championships that Murata, a two-time world junior champion at the time, stole the spotlight, even in defeat. She advanced to the 55kg final against Yoshida, and drew gasps when she threw the three-time Olympic gold medalist onto her back and nearly secured a fall. In the end, Yoshida rallied and held on for a 6-5 victory.

Murata, a product of the JOC Elite Academy, met Yoshida four times, including the finals of both the Meiji Cup and Emperor’s Cup in 2011. She lost all four, but gave Yoshida a tough fight each time.

It is with great sadness that we announce the death of Yukiko TOMIYAMA, the wife of JWF Vice President Hideaki TOMIYAMA. She was 63.

Mrs. Tomiyama died on July 24 in the hospital after an extended fight with cancer.

The two were classmates at Nihon University and were married after Hideaki won a gold medal at the 1984 Los Angeles Olympics. She was diagnosed with cancer in January this year which eventually spread throughout her body.