Former world champion Yuki TAKAHASHI made the most of a chance to keep his Olympic dream alive, while Sohsuke TAKATANI earned a third trip to the Olympics after the two turned in strong performances as the final world Olympic qualifying tournament in Sofia, Bulgaria.

Takahashi secured a spot for Japan at the Tokyo Games with a victory at freestyle 57kg, and Takatani did likewise at 86kg at the grueling tournament held May 6-9 to fill the final two spots in each weight class.

While both Takahashi and Takatani came away with gold medals, much bigger victories came a round earlier in the semifinals, as that was when the qualifiers for the Tokyo Olympics were decided. 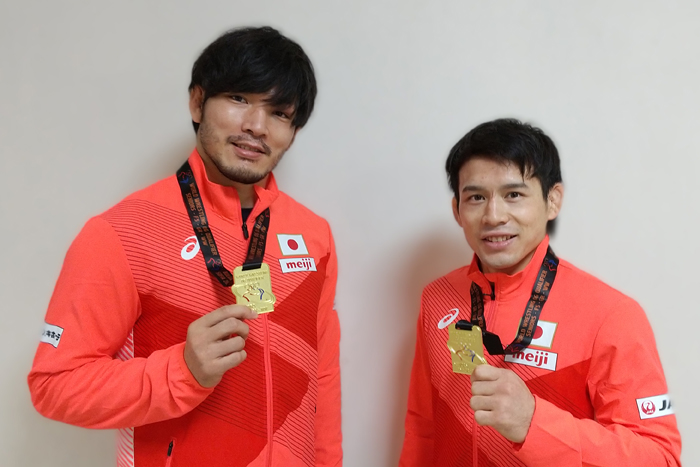 Takahashi scored a takedown in the first period and that was all he needed for a 2-0 victory at 57kg over Pan American champion Reineri ANDREU (CUB). The match was repeat of their bronze-medal clash at the 2018 World Championships, which Takahashi won 7-5.

Takatani, who survived a scare in the quarterfinals when he needed a late stepout to advance, was in control throughout his semifinal victory over Zbigniew BARANOWSKI (POL) at 86kg, scoring three takedowns in a 7-2 victory.

“It’s a big plus to face such tough opponents from around the world before the Olympics,” said Takatani, who had failed to earn a spot at the Asian Olympic qualifier in April after suffering a last-minute loss. “My movement at the Asian qualifer and my movement this time were completely different.”

While Takatani automatically fills the Olympic berth himself, Takahashi still has one last hurdle to get over. Japan federation criteria mandates that he now must face 2019 All-Japan champion Rei HIGUCHI in a playoff for the spot.

It was only a twist a fate involving Higuchi that allowed Takahashi to even take the mat in Sofia and keep alive his dream of appearing in a first Olympics. 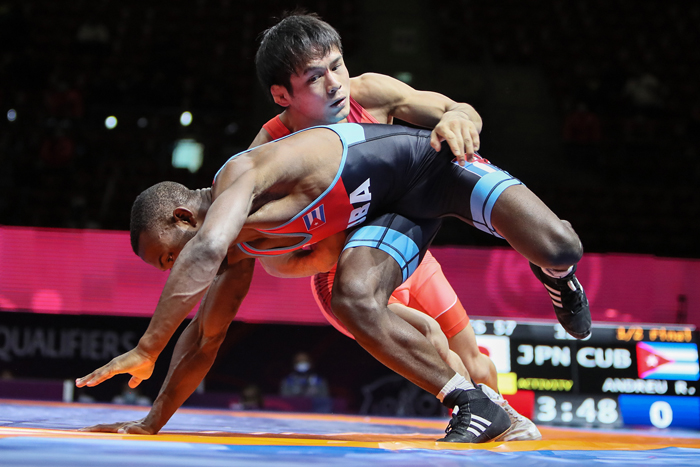 Yuki TAKAHASHI works to get a takedown in the 57kg semifinal against Reineiri ANDREU (CUB).=photo by UWW/MARTIN Gabor

After Takahashi failed to secure an Olympic spot at the 2019 World Championships, where the top six finishers qualified their countries for Tokyo –Japan secured freestyle spots at 65kg and 74kg — he lost to 2016 Rio Olympic silver medalist Higuchi at that year’s All-Japan Championships.

That earned Higuchi the right to compete at the Asian Olympic qualifying tournament which, like the Olympics itself, ended up being delayed a year. It was held last month in Almaty, Kazakhstan. But Higuchi stunned Japan and the wrestling world when he failed to make weight as a prohibitive favorite at 57kg, which drew just nine entries.

The Japan federation opted to dispatch Takahashi, the 2020 All-Japan champion, in Higuchi’s place to the world qualifier, confident that he could adequately prepare over the intervening three weeks. He lived up to the expectations, emerging from the field of 23 as one of the two finalists.

The 2017 world champion, who recently started a job as coach of his alma mater of Yamanashi Gakuin University, had a bye into the quarterfinals and started his campaign with a 10-0 technical fall over Razvan KOVACS (ROU).

In the semifinal against Andreu, Takahashi was on the clock when he scored with a single-leg takedown in the first period. In the second period, neither wrestler could break through the other’s defenses, although Takahashi at one point had to wiggle out of a low single attempt by the Cuban.

“People watching may have been on pins and needles, but I was wrestling my way and was not worried,” Takahashi said. “Even if he scored points, I was confident I could get a tackle and get the points back.

“This was for the Olympics so I admit I was being cautious, but I was keeping a close watch on my opponent’s movement and stayed calm. My belief in myself gives me the most confidence.”

Takahashi said he wanted to set a good example for the team members at Yamanashi Gakuin.

“This year I became a coach at Yamanashi Gakuin and I can’t let the students see me have a shameful match,” he said. “I want to lead by example, and make them want to try to follow after me.”

With the Olympic spot secured, Takahashi came back the next night for the final, in which nothing was on the line but pride. He took a 1-0 lead against fellow qualifier and two-time world medalist Bekhbayar ERDENEBAT (MGL), but the Mongolian conceded the match before the start of the second period.

“It didn’t matter if I won or lost, so I just went into the match looking to have fun,” Takahashi said. “As the lightweight division has a long tradition in Japan, and with the Olympics being in Japan, at the very least it was necessary to fight.”

Looking ahead to the playoff with Higuchi, tentatively set to be held in conjunction with Meiji Cup later this month, Takahashi said, “Victory is everything. My thinking going in will be, as I was the one who earned the ticket, it’s only natural that I go to the Olympics, right?” 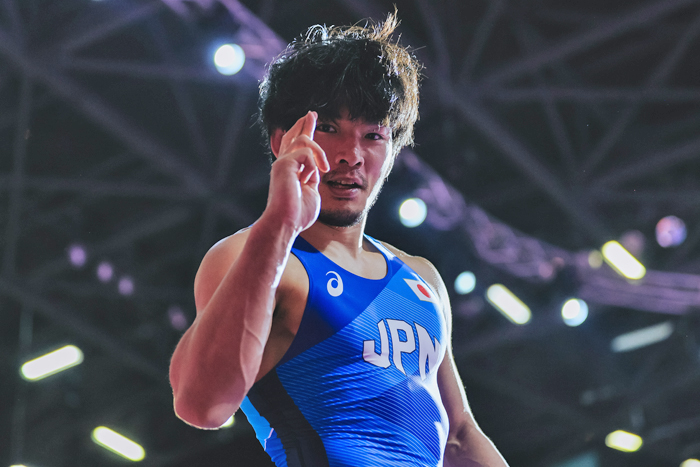 Takatani, who has earned a name in Japan for doing some post-victory preening on the mat, saved his best moves for the competition in arguably his best outing since moving up to 86kg.

Takatani appeared at the 2012 London and 2016 Rio Olympics at 74kg, the division in which he won a world silver medal in 2014. He gradually moved up to the next Olympic weight of 86kg, stopping one year at 79kg, and it was a process handling his own extra weight and that of his opponents.

In the semifinals at the Asian qualifier in April with an Olympic spot on the line, Takatani squandered a 6-1 lead in losing 8-7 to Zushen LIN (CHN) when he gave up a takedown with :23 left.

The Kyoto native made sure to avoid any similar lapses in Sofia, where his weight class had 30 entries, nearly three times the 11 at the Asian qualifier.

After starting with a 10-0 technical fall over Simone IANNATTONI (ITA), he eked out a nail-biting 5-4 win over Russian-born 2018 world bronze medalist Taimuraz FRIEV (ESP) by scoring a stepout with :05 left.

Takatani had no trouble advancing to the final four as he rolled to a 12-0 technical fall over Istvan VEREB (HUN) in the quarterfinals.

In his semifinal against Baranowski, the silver medalist at last December’s Individual World Cup, Takatani scored on a stepout and a takedown while on the activity clock to take a 3-0 lead in the first period.

In the second period, the two traded takedowns before Takatani put the match out of reach with his third takedown for a 7-2 win.

“It was the first time since I was younger that I had four matches in one day,” Takatani said. “I had some concerns about my stamina, but I was able to fight for the full six minutes.”

Takatani was spared a fifth match in the final the next night when Boris MAKOEV (SVK) defaulted, one of four finals that were never wrestled.

Takatani credited younger brother Daichi, who had come up short in attempts to make it to the Olympics at both 65kg and 74kg, for providing the moral and physical support to get him over the line. Daichi was in his corner in Sofia. 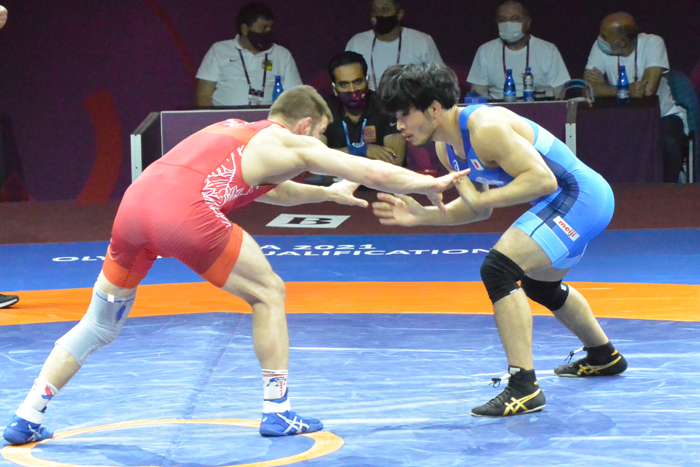 “The first thing that came to mind when I won was I felt grateful to my brother,” Takatani said. “I thought of putting on a little performance after the victory, but I was too emotional.

“[Daichi] has been behind me since the Asian qualifer. I had intended to get [an Olympic] place at the Asian qualifier but I didn’t do it. I felt lifeless. When I got back to Japan, I had to isolate for two weeks and couldn’t practice, but he helped me. The biggest factor for being able to fight in this condition was my brother, and I am grateful.”

Takatani and the winner of the Takahashi-Higuchi playoff will join brothers Takuto and Keisuke OTOGURO, who previously qualified at 65kg and 74kg, respectively, as Japan’s freestyle entries at the Tokyo Olympics.

Japan failed to qualify at the two heaviest weights, 97kg and 125kg, in which the entrants at Sofia were replacements after the two who competed at Almaty tested postive for the coronavirus.

Takashi YAMAGUCHI, who only found out that he would be taking Naoya AKAGUMA‘s place at 97kg a week before departing for Sofia, lost a close 3-2 decision to European bronze medalist Radoslaw BARAN (POL).

Baran scored a takedown early in the second period to go up 3-0 and held on for the victory.

At 125kg, Taiki YAMAMOTO was forced to default his second-round match against Rustam ISKANDARI (UZB) in the second round after suffering a back injury in the final seconds of a wild 10-10 victory on criteria over Rares CHINTOAN (ROU) in his qualification-round match.

In that match, Yamamoto went ahead 10-4 with a 4-point move with 1:09 remaining before the Romanian came back with a 2-point exposure, then hit a 4-point throw with :06 left in which Yamamoto landed on his head.

“It was a shock that I had to default, but it was my own mistake that allowed the injury to happen,” said Yamamoto, who had replaced Tetsuya TANAKA. “But I fell head first when I was thrown and I felt it in my neck. I couldn’t move it.”

In Greco-Roman, Japan was unable to add to the two Olympic spots it already has, as Shogo TAKAHASHI at 67kg was the only one of four entrants to advance as far as the semifinals, but was unable to emulate his freestyle namesake.

Takahashi, a 2019 Asian bronze medalist, met his match in Parviz NASIBOV (UKR), who scored a pair of 4-point moves in the second period to chalk up a 10-3 victory and gain the Olympic spot. 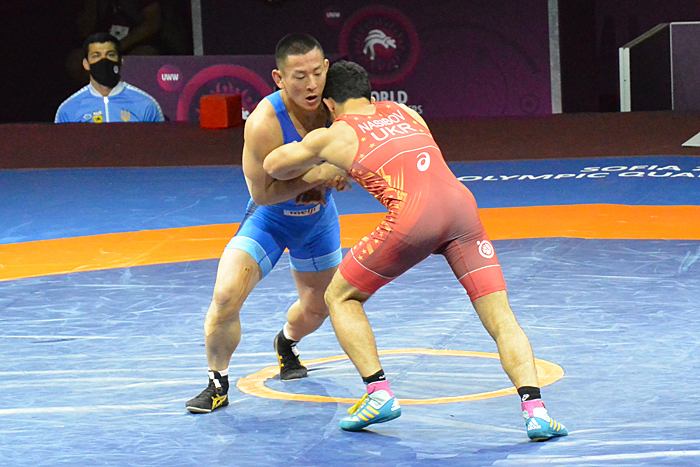 Shogo TAKAHASHI came up short in the 67kg semifinal against Parviz NASIBOV (UKR).=photo by JWF

Takahashi took a 3-0 lead by scoring with a roll in the par terre position. But in the second period, he was stuffed on a back drop attempt for 4 points, then later thrown for another 4.

“The worst in me came out,” Takahashi said. “I had the lead in the first period, but I’m still not able to control the flow of the match. My opponent was slightly better than me. I feel like I had a shameful match.”

Takahashi made it to the last four by beating Marcos SANCHEZ (ESP) 5-1, Diego MARTINEZ (MEX) 5-0 and Aliaksandr LIAVONCHYK (BLR) 2-1.

“It’s a devastating feeling to lose when I needed just one more win,” Takahashi said. “What is toughest to take is that I was unable to repay my family, coach [Shingo] Matsumoto, the coaches at Nittadai [Nippon Sports Science University] and everyone else who supported me.”

At 87kg, Masato SUMI was unfortunate to be drawn into a stacked bracket and, after starting with an 8-0 technical fall over Alvis ALMENDRA (PAN), came up on the short end of a 1-1 loss by criteria to Asian champion Naser ALIZADEH (IRI).

Yuta NARA also won his opening match at 97kg, beating Olzhas SYRLYVAY (KAZ) 2-1, but saw his tournament end with a 9-0 technical fall loss to Vilius LAURINAITIS (LTU) in the second round.

At 130kg, Arata SONODA had a bye into the quarterfinals, but fell 5-2 to Moises PEREZ (VEN).

In Greco, Japan’s lone entrants at the Tokyo Games will be world champion Kenichiro FUMITA at 60kg and Shohei YABIKU, who earned a place at 77kg at the Asian qualifier.

As Japan had already qualified in all six women’s weight classes, it had no entries in the women’s competition in Sofia.