TOKYO–A month ago, Tsuchika SHIMOYAMADA conquered Asia on his fourth try. Can he fare just as well when he makes a second attempt at a world title later this year?

Shimoyamada earned that chance by winning the Greco-Roman 67kg gold at the Meiji Cup All-Japan Championships in Tokyo to secure a spot on Japan’s team to this year’s World Championships to be held in October in Oslo.

A big 4-point body slam helped Shimoyamada build a 7-point lead before holding on to defeat Kyotaro SOGABE 9-5 in the final as he regained the Meiji Cup crown he won for the first time in 2018.

Shimoyamada, who also had a 5-point throw in a 6-5 victory in the semifinals over Shintaro YOSHINAGA, was named winner of the Meiji Cup as the most outstanding wrestler of the tournament, held May 27-30 at Tokyo’s Komazawa Gym.

“I had no image of how I was going to win at the Meiji Cup,” said the 26-year-old Shimoyamada, a member of the Metropolitan Police Dept. “I really worried about it before the tournament. 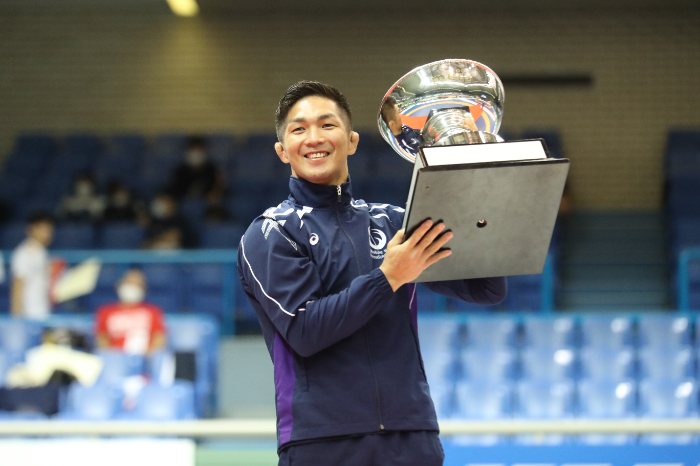 67kg champion Tsuchika SHIMOYAMADA holds up the Meiji Cup as the tournament’s most outstanding wrestler.

The Meiji Cup, held without spectators after Tokyo declared a third state of emergency following a surge in coronavirus infections, served as the second domestic qualifier for this year’s World Championships in combination with the Emperor’s Cup All-Japan Championships held in December.

In weight classes in which the winners of the two tournaments were different, a playoff was held after that day’s competition at the Meiji Cup, as long as the Emperor’s Cup champion was in attendance.

In Greco-Roman, Shimoyamada was one of just three Emperor’s Cup champions who repeated their victories at the Meiji Cup, thus securing their places on the team to Oslo outright. Also completing the double were Satoki MUKAI at 82kg and Arata SONODA at 130kg.

Kenichiro FUMITA (60kg) and Shohei YABIKU (77kg) were among the 12 wrestlers who have qualified for the Tokyo Olympics who skipped the tournament. In Fumita’s case, it also meant giving up a chance to defend the world title he won in 2019. 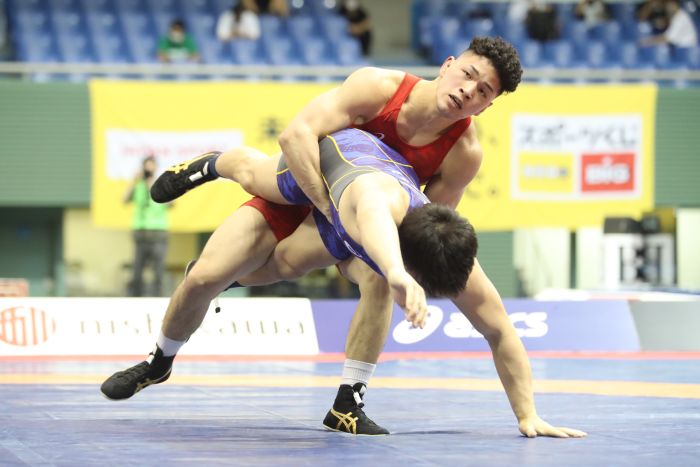 Others missed the tournament for various reasons — in the case of Takushoku University’s Kensuke SHIMIZU at 63kg, it was because he submitted his entry form too late.

But Shimizu was on hand for the playoff, and earned a ticket to Oslo by beating Meiji Cup winner Ryuki YAMADA 3-3, with a 2-point penalty for touching the legs assessed against Yamada providing the difference on criteria.

Like Shimoyamada, Shimizu appeared at the Asian Championships in Almaty in April. But he said he was not at full strength and became the only Japanese in the four lightest weight classes to fail to win a medal. He aims to fare better at the World Championships.

“To tell the truth, I injured my knee and couldn’t practice for two weeks, and went into the [Asian Championships] with an uneasy feeling,” said Shimizu, a nephew of Olympic speed skating gold medalist Hiroyasu SHIMIZU.

“My college teammate Yu SHIOTANI won the 55kg title, and watching it on the monitor, I thought that was amazing. I want to be in top condition and achieve something at the World Championships.”

Yamada, technically the defending Meiji Cup champion after the 2020 tournament was canceled due to the pandemic, retained the 63kg title with a 3-1 victory in the final over Yuto NAGASAWA. 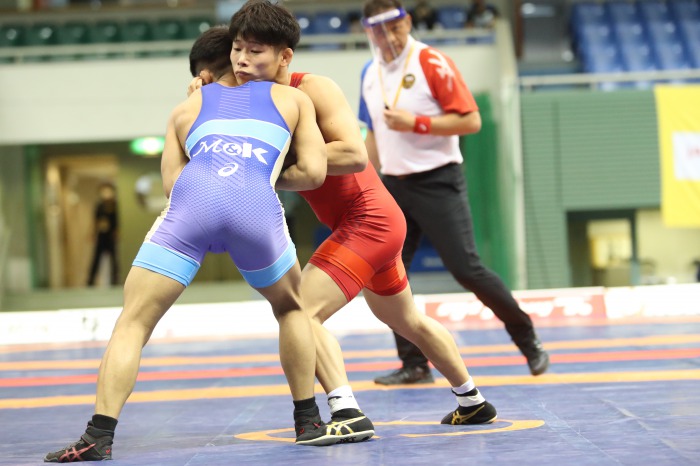 Mukai, a bronze medalist at the Asian Championships, defeated Self-Defense Forces’ Physical Training School teammate Yoji KAWAMURA 4-0 in the 82kg final in a repeat of the championship match at the Emperor’s Cup.

Mukai, who was named the outstanding wrestler for Greco-Roman, advanced to the final with a pair of technical fall victories, and did not surrender a point all day.

“I didn’t give up any points and I got all of the calls on passivity and I thought I was good on attack,” Mukai said. “But I also feel I am still weak on the ground.”

Sonoda remained the nation’s dominant heavyweight, needing just 44 seconds of mat time to win his seventh straight title at 130kg. With just three entries, Sonoda had a bye into the final, where he quickly put away Satoshi KAIZUKA by 9-0 technical fall.

The other Greco playoff came at 97kg, in which Yuta NARA defeated Emperor’s Cup champion Masayuki AMANO 3-1 to earn a fourth trip to the World Championships.

Earlier, Nara captured his fifth straight Meiji Cup title when he scored all of his points in the second period to beat Yuri NAKAZATO 6-1 in the final.

Nara had little time to recover after failing to qualify for the Tokyo Olympics at both the Asian and world qualifiers, and then having to undergo the requisite two weeks of self-quarantine upon returning to Japan.

“The time you have in a wrestling career is limited,” Nara said on competing so soon after the Olympic qualifiers. “Also, I feel that I’m the one carrying this weight class for Japan.”

At the 2020 Emperor’s Cup, Nara was dealt a stunning defeat in the semifinals by Masaaki SHIKIYA, who then lost to Amano in the final. That was Nara’s first domestic defeat at 97kg since 2016. 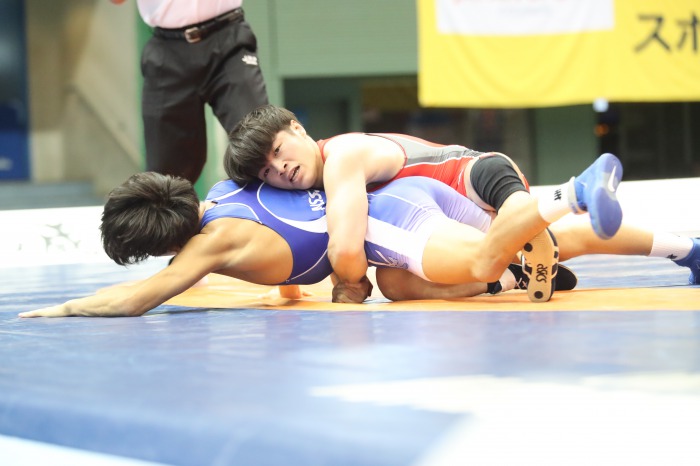 Ayata SUZUKI earned the world team spot at 60kg with a victory in the final over Kaito INABA.

Asian bronze medalist Ayata SUZUKI, the runner-up to Fumita at the Emperor’s Cup, will aim to keep the 60kg world title in Japanese hands after earning the ticket to Oslo with a 3-1 victory over Kaito INABA in the final.

“There are many who came before me in the lighter weights who made their marks at the worlds,” said Suzuki, a training partner and fellow Nippon Sports Science University alumnus of Fumita. “I will take that pride with me as I aim for the gold medal.”

At 55kg, 2017 world cadet champion Ken MATSUI of NSSU took the title in his Meiji Cup debut, defeating high schooler Taiga ONISHI 3-1 in the final. Matsui earned the place on the world team in the absence of Emperor’s Cup champion Hiromu KATAGIRI, as well as runner-up and Asian champion Shiotani.

“The No. 1 and 2 wrestlers did not compete, and I have to really raise my level if I want to beat them,” Matsui said. As for his young opponent, he commented, “While I thought I can’t lose to him because he’s a high schooler, I also disregarded that he was in high school and put out everything I had.”

The 34-year-old Inoue, a 2018 Asian bronze medalist who placed fifth at the 2016 Rio Olympics, was competing for the first time in 1 year 5 months. He had been looking ahead to entering Masters competitions, but now will discuss with his company Fujioh about making the trip to Oslo amid the pandemic.

The other titles and world team places went to SDF Physical Training School teammates Kodai SAKURABA at 77kg and Takahiro TSURUDA at 87kg, who were both bronze medalists at the Emperor’s Cup.

Sakuraba, the 2019 world U-23 silver medalist, defeated Nao KUSAKA 3-1 for his first Meiji Cup title, while Tsuruda regained the crown he previously won in 2018 by beating Takumi TANIZAKI 5-1.