TOKYO–Teenagers Akari FUJINAMI and Nonoka OZAKI were among eight women who completed the “All-Japan” double to earn places outright on Japan’s team to this year’s World Championships.

For the young duo, it also means making a direct leap from world cadet champion to the top tournament on the senior level.

“I told myself, just do like I always do, do as I always do, and I came into the tournament in a relaxed manner,” Fujinami said. “It boosts my confidence, but looking at the world, I need to get much stronger. I have a lot of issues to address. The physical aspect is what I most need to work on [for the senior level].”

The victory in the tournament, held May 27-30 at Tokyo’s Komazawa Gym, was a repeat of Fujinami’s win over Irie in the final at the Emperor’s Cup All-Japan Championships in the same arena in December, when the 17-year-old made her senior-level debut. 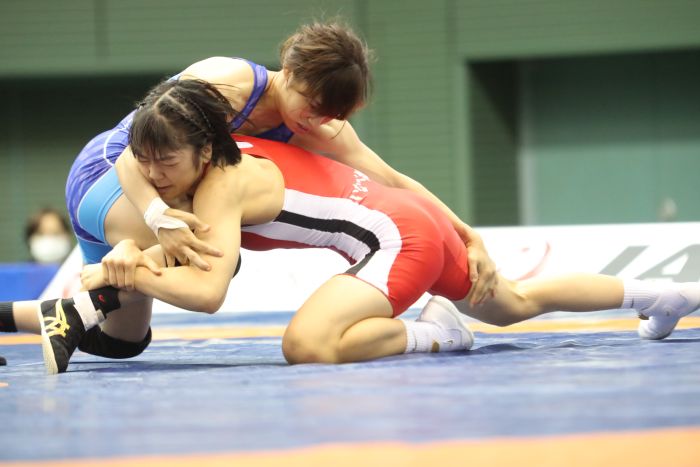 Teen star Akari FUJINAMI works for a single-leg takedown in the 53kg final against Nanami IRIE.

The two All-Japan tournaments serve as qualifiers for this year’s World Championships in October in Oslo; a victory in both clinches a berth on the Japan team, while a playoff was held in weight classes in which the winners were different.

Two of the women’s weight classes went to playoffs, and each involved one of twin sisters Naruha and Yasuha MATSUYUKI, who came away with mixed results. Only Yasuha will be making the trip to the World Championships.

Fujinami, a third-year student at Inabe Gakuen High School who was the 2018 world cadet champion, showed that her triumph at the Emperor’s Cup was no fluke by not only beating Irie again, but also posting a second win over former two-time world champion Haruna OKUNO.

Fujinami put on an exhibition of her lethal single-leg takedown and quickness in overwhelming Okuno 11-2 in the semifinals. It was much of the same in the final against Irie, the 2019 world silver medalist at 55kg, as Fujinami got two second-period takedowns to end the match at 4:51.

“At the Emperor’s Cup, I had trouble finishing up my takedowns,” said Fujinami, whose older brother Yuhi was a 2017 world bronze medalist at 70kg. “This time, I made it a point that once I touched the leg I would immediately turn it into points.”

As for her prospects of her senior international debut, Fujinami said, “Just imagining it gets me excited. I want to make people think, ‘That Fujinami is strong after all.'”

Okuno, a 2017 and 2018 world champion, will certainly attest to Fujinami’s power. “When it comes to level, at this point its not right to even compare me with Fujinami,” she said.

Fujinami has not lost since June 2017, when she was defeated in the final of the national junior high school championships by Umi ITO, who placed second at the Meiji Cup at 50kg. 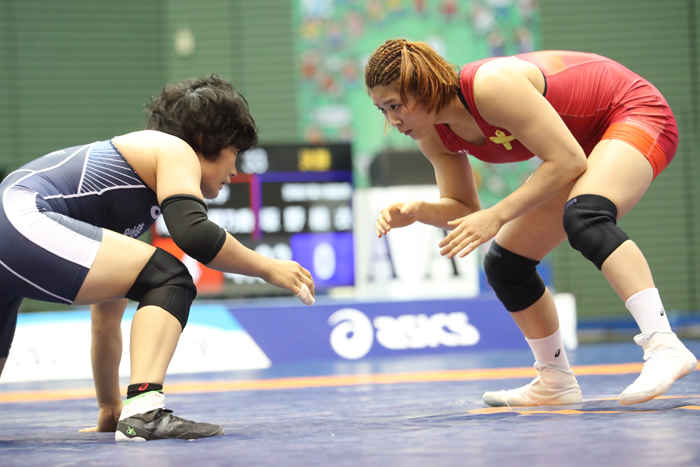 Ozaki, an 18-year-old freshman at Keio University, continued an equally impressive run of her own with a 6-0 victory over 2017 world U-23 champion Yui SAKANO in the 62kg final. That gave her an 18th title in 19 tournaments dating back to April 2017.

“I came in with the objective of definitely winning the title and getting to the World Championships, and I’m relieved I did it,” Ozaki said. “I’ve won world cadet titles, but this will be my first senior worlds and I’m very excited.”

A product of the elite JOC Academy where she still trains, Ozaki won back-to-back world cadet titles in 2018-19. She also won three straight golds in the cadet division of the prestigious Klippan Lady Open in 2018-20.

Her lone loss over the past four years came at the Interhigh national high school tournament in August 2018, where she fell 4-2 in the semifinals at 57kg to Yuzuka INAGAKI, the world junior and U-23 champion the following year.

Ozaki is a bit of a rarity in that after graduating from Teikyo High School, she opted to bypass the collegiate powerhouses and enter academically elite Keio, where she will be a true scholar-athlete while pursuing a degree in the Faculty of Environment and Information Studies. 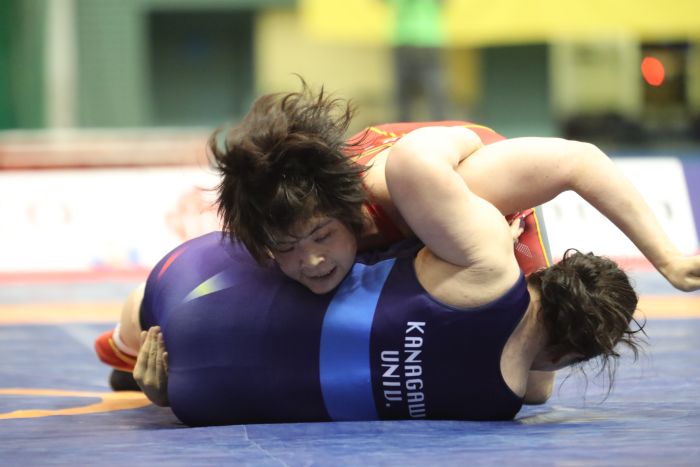 Masako FURUICHI turns over Sumire NIIKURA en route to a fall in the 72kg final.

In other action, 2019 world bronze medalist Masako FURUICHI captured the 72kg crown, making her the only one of six Japanese women medalists from the last World Championships in 2019 to be making the trip to Oslo. The four others (Irie is the fifth) won’t be going back because they qualified for the Tokyo Olympics and did not enter the Meiji Cup.

Furuichi followed up her title run at the Emperor’s Cup by defeating 2019 champion Mei SHINDO 8-0 in the semifinals, then scored a victory by fall over an overmatched Sumire NIIKURA in the final.

Furuichi flipped Niikura onto her back after a takedown and ended the match in 1:38 for her second Meiji Cup title, adding to the one she won at 69kg in 2016. 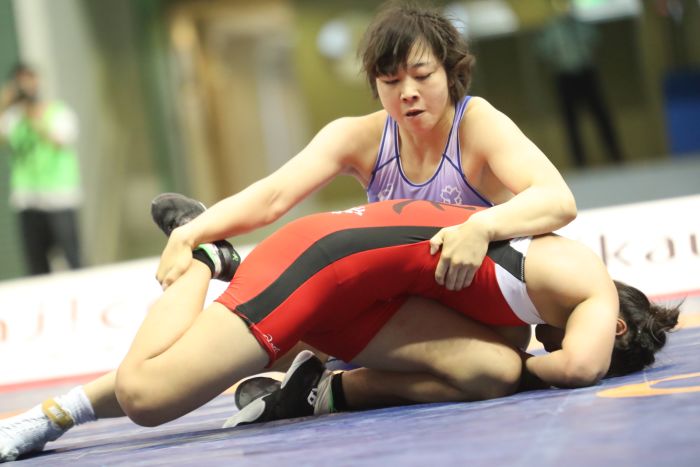 Rin MIYAJI defends against Naruha MATSUYUKI during their world team playoff at 68kg.

At 68kg, unheralded Rin MIYAJI pulled one of the surprises of the tournament when she defeated world junior champion Naruha MATSUYUKI in the final, then beat her again in the playoff for the World Championships.

“First of all, I’m relieved,” the 20-year-old Miyaji said. “It’s the first time to make a final and win at an All-Japan, so I’m really happy.”

In the gold-medal match, Miyaji trailed early in the second period before storming to an 8-2 victory. The two returned to the mat about an hour later for the playoff, which Miyaji won handily 7-2.

“In the final, no matter how matter points I gave up, I kept imagining my hand being raised in the end,” Miyaji said. “And in the end I won, so it was alright.”

Miyaji had finished third at 62kg in December at the Emperor’s Cup All-Japan Championships, where Matsuyuki won the 68kg gold.

“I will be appearing in my first World Championships, but it’s not enough just to take part,” Miyaji said. “I will give everything in practice starting today to be able to come home with the gold medal.”

The 68kg division saw the return from a lengthy injury absence of Ayana GEMPEI, a 2018 world bronze medalist at 65kg and a two-time world U-23 champion.

Gempei, wrestling pain-free for the first time in 2 1/2 years, saw her tournament end at the semifinal stage with a dramatic loss to Matsuyuki.

Gempei took a 2-2 lead on criteria with a stepout late in the match, only to have Matsuyuki, a junior teammate during her days at Shigakkan University, hit a 4-point move in the closing seconds for a 6-2 win. 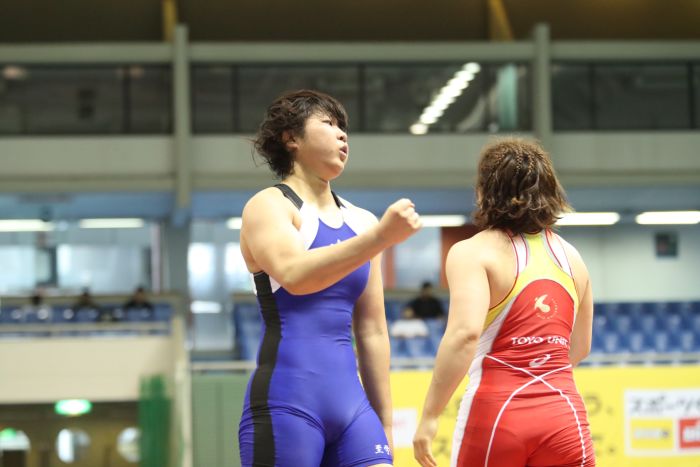 Yasuha MATSUYUKI celebrates her victory over Yuka KAGAMI in the world team playoff at 76kg.

The Matsuyuki family, which saw older brother Taisei finish second at freestyle 86kg, assured it would be represented in Oslo when three-time world junior medalist Yasuha claimed the women’s 76kg spot on the final day.

Matsuyuki defeated an injury-hampered Yuka KAGAMI 3-1 in the final, then followed with a 5-0 victory over her in the playoff. That avenged a loss to the 2019 world junior and Asian champion at the Emperor’s Cup.

“I was determined that no matter what, I was going to win the title, then win the playoff and get the spot for the World Championships,” said the 21-year-old Matsuyuki.

Kagami said she injured her right ankle in practice five days before the tournament and had considered withdrawing up to the last minute. But with a World Championships berth on the line, the 19-year-old thought she might be able to somehow manage to eke out a win.

“I couldn’t attack so I had to come up with a plan to score one or two points,” Kagami said. “I knew I was going to draw cautions. I just tried to do what I could.”

Matsuyuki said she did not know about her opponent’s injury, but could tell something was amiss.

“Her wrestling style was different than usual,” Matsuyuki acknowledged. “I didn’t hear anything directly from her, but I thought she must have some kind of injury. She usually goes for tackles, but she didn’t try any.” 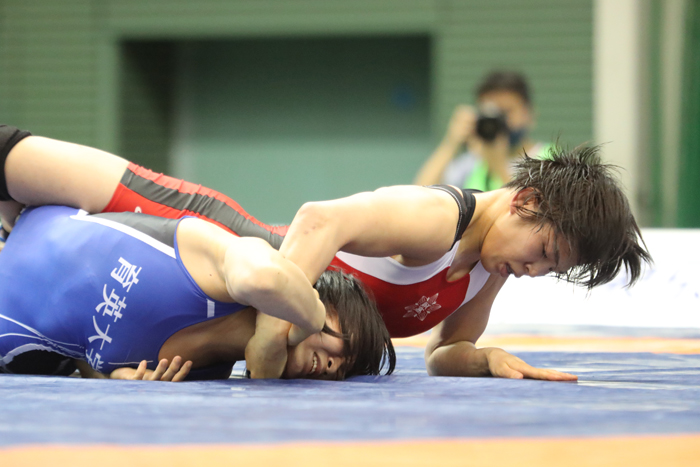 Sae NANJO scored her third straight technical fall of the day to win the 57kg title.

A pair of 2019 world junior champions, Sae NANJO at 57kg and Miwa MORIKAWA at 65kg, will be on the flight together to Oslo to compete at their first senior World Championships.

Nanjo, also the world U-23 champion in 2019, stormed to three straight technical falls without giving up a point, taking the gold with an 11-0 whitewash of Sakura MOTOKI in the final.

She will look to keep the world 57kg title in Japan hands as she takes the place of 2019 champion Risako KAWAI, who skipped the All-Japan tournaments as she prepares to defend her Olympic title this summer.

Morikawa had just one match, but it was far from easy as she forged out a 4-2 victory over 2020 Asian champion Naomi RUIKE.

Morikawa came close to a Tokyo Olympic spot but lost out in a playoff at 68kg to Rio 2016 gold medalist Sara DOSHO. Her eyes are on the Paris 2024 Games, although she does not yet know in which weight class.

“I’m small even for 65kg, so this year I will secure a clear victory at 65kg and make that lead to better things ahead,” said Nippon Sport Science University’s Morikawa.

At 55kg, Tsugumi SAKURAI repeated her triumph at the Emperor’s Cup, this time by beating 2018 world junior champion Umi IMAI in the final. Sakurai scored a takedown in each period of a 4-2 win.

Sakurai’s victory at last December’s Emperor’s Cup made her the first-ever national champion from Ikuei University, which was founded in 2018 and is aiming to challenge the women’s collegiate powerhouses of Shigakkan and NSSU.

“This will be my first time at the senior World Championships,” Sakurai said. “Until now, it was something far off. But now that I am going, I have to work harder. As long as I’m there, I want to win the gold.” 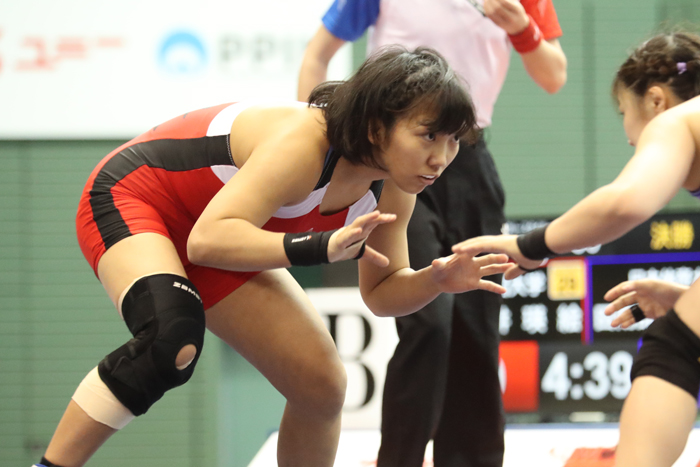 Akie HANAI will be heading to her first senior World Championships after winning the 59kg title.

The 59kg title went to Shigakkan’s 2019 world junior champion Akie HANAI, who edged Yumeka TANABE 2-1 in a final in which all points were scored on the activity clock.

Combined with her Emperor’s Cup victory to give Hanai a place on her first senior world team, it also comes after she missed out on a first appearance at the Asian Championships in April when Japan withdrew the women’s team due to contact with a person infected with the coronavirus.

In the semifinals, Tanabe scored a last-gasp victory by fall over fellow 2019 world U-23 champion Inagaki. Trailing 3-2 in the final minute, Tanabe used a nifty inside leg hook to trip Inagaki backwards, then clamped down for the fall.

At 50kg, Remina YOSHIMOTO repeated her Emperor’s Cup win over Waseda’s Ito, beating her 9-0 in the final to give Shigakkan yet another representative on the world team.

Yoshimoto, a 2017 world cadet champion and 2019 Asian junior champion, did not surrender a point in three matches, which included two technical falls.

Yoshimoto, a 2017 world cadet champion and 2019 Asian junior champion, did not surrender a point in three matches, which included two technical falls, and was named the tournament’s outstanding wrestler for women.