Following their triumphant runs at the Tokyo Olympics, there was more to celebrate for two of Japan’s four gold medalists in women’s wrestling.

Instead of a buzzer, it was wedding bells that sounded for both Risako KAWAI, who won the 57kg title for her second straight Olympic gold, and Mayu MUKAIDA, the champion at 53kg in her Olympic debut. 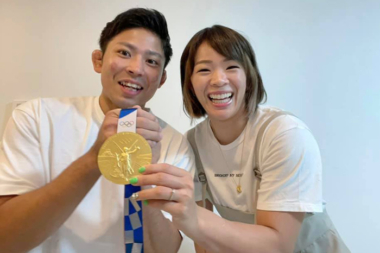 Kawai announced on her Instagram account on Aug. 27 that she and Kiryu KINJO, a former wrestler for the Self-Defense Forces, had registered their marriage.

Kinjo, a 2014 graduate of Kokushikan University, finished third in 2017 at both the All-Japan Invitational Championships and All-Japan Championships at 65kg, but was unable to fulfill his aspirations of making it to the Tokyo Olympics. In April this year, he started a new career as a teacher at Tsuruga Kehi High School in Fukui Prefecture.

The couple began seeing each other following the 2016 Rio Olympics, where Kawai won the gold at 63kg. While seeing his own Olympic hopes ended, Kinjo provided support to Kawai in her successful bid to repeat as Olympic champion.

“As fellow athletes, we have the same aspirations and inspire each other, and he has been at my side supporting me in good times and bad,” Kawai wrote on Instagram. “Right up to the time I took the Olympic stage, he became an indispensable part of my life, like family, and I want him to be with me in the future.”

The 26-year-old Kawai plans to continue her career with the aim of winning a third straight Olympic gold. Her new home in the city of Tsuruga is about a two-hour drive from her current training base at Shigakkan University in Aichi Prefecture, and it appears that, while not making the trip every day, the plan is to commute several times a week for practice. 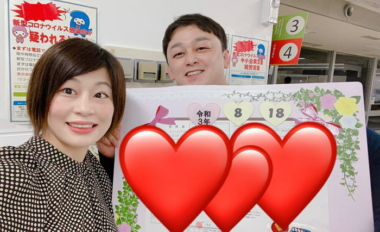 With the exception of a one-year delay, all went according to plan for Mayu MUKAIDA, who won the Olympic gold then married coach Shota SHIDOCHI (photo from Mayu Mukaida’s Instagram account)

Mukaida’s marriage to her coach, Shota SHIDOCHI, who was in her corner at the Olympics and with whom she shared a celebratory hug immediately after her victory, came after an extended delay. Mukaida’s company, JTEKT, announced the nuptials on Aug. 18.

“We are thankful for the great amount of support we received at the Tokyo Olympics,” the two wrote in a joint statement. “We officially registered our marriage on Aug. 18. For the future, we plan to continue our efforts and support each other as we head to the Paris Olympics.”

The couple became engaged after the 2019 World Championships, where the two-time former champion Mukaida won the silver medal. Shidochi left his job as a national team coach to become Mukaida’s private coach.

In Japan, most brides take their husband’s family name. In Mukaida’s case, all involved, including Shidochi, thought it best that she compete at the Tokyo Olympics under her maiden name, so the two put off their marriage until after the Olympics—not knowing at the time, of course, that they would have to wait an additional year.

Having finally tied the knot, Mukaida will begin her quest to repeat as Olympic champion in 2024 as Mayu Shidochi.

Those two were not the only ones with happy news. Eri TOSAKA, the 2016 Rio Olympic champion at 48kg, announced on Instragram on Aug. 21 that she had given birth to her first child, a boy, on Aug. 10.

“Every day I spend with my child is filled with new experiences, but it is a loving and happy time,” Tosaka wrote.

“As an athlete, I still have a desire to compete,” Tosaka wrote, avoiding saying outright her intention to retire, but, “I also had a desire to have a child, and I will move on to the next stage after giving birth. From now, as a mother, I will grow as a person with my family, and protect this precious life.”

Superteen Akari FUJINAMI, who has already earned a place at this year’s World Championships where she will make her international senior debut, showed she was in a class of her own by cruising to a second title at the National High School Championships.

Fujinami, a third-year student at Inabe Gakuen High School in Mie Prefecture, won all four of her matches by fall or technical fall at 53kg in the tournament held Aug. 21-24 in the town of Oi, Fukui Prefecture. 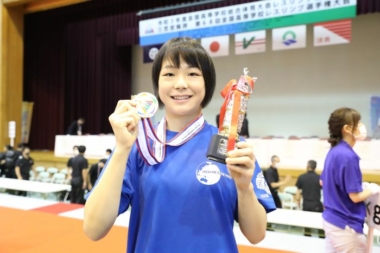 Akari FUJINAMI dominated as usual in winning a second title at the National High School Championships.

A 10-0 technical fall in the final over Sakura ONISHI of Saitama Sakae High School gave Fujinami a second straight title, adding to the one she won in 2019. The 2020 tournament was canceled due to the pandemic.

As usual, Fujinami was her own harshest critic. “In the final, my opponent was able to get to my leg, and I was called for passivity first, and she moved faster,” Fujinami said. “I think it was a good to learn from that kind of battle.”

In December last year, Fujinami lived up to the hype by winning the 53kg title at All-Japan Championships in her domestic senior debut, then followed that up with a victory at the All-Japan Invitational Championships this past May. At both tournaments, she knocked off both former world champion Haruna OKUNO and world silver medalist Nanami IRIE.

That earned the 2018 world cadet champion a ticket to this year’s senior World Championships in Oslo, to be held Oct. 2-10. “I am aiming for nothing less than the top,” Fujinami said. “I like facing strong competition, and I’m already excited about it. I can’t yet picture it, but I want to cause a scene.”

Fujinami, who has not lost since June 2017, hails from the same prefecture (Mie) that produced newly crowned Tokyo Olympic champion Mayu MUKAIDA, who has been something of a hero to the youngster. Now she is aiming to overtake her. The two have never met in an official match.

“I want to surpass her and go to Paris,” Fujinami said. “She looks very strong. So I want to beat her as soon as possible. I want to take her on.”

That dream match-up could come off as soon as December at the All-Japan Championships, where it could very much be a clash between the reigning Olympic and world champions.

While the Olympics were able to be held amid the surge in infections, three major domestic tournaments were not so fortunate, becoming the latest victims of the pandemic.

With record numbers of new infections spreading throughout the country, organizers were forced to cancel the All-Japan Collegiate Championships, scheduled for Aug. 25-28 in Tokyo; the wrestling competition at the National Sports Festival, slated for Sept. 11-14 in Tsu, Mie Prefecture; and the All-Japan Women’s Open, scheduled for Oct. 16-17 at Yaizu, Shizuoka Prefecture.

It marks the second year in a row that all three tournaments were canceled.

The pandemic made it not possible to hold the qualifying tournaments for the men’s styles, and the difficulties in the exit and entry procedures for traveling abroad implemented by the Japanese government were also taken into account.