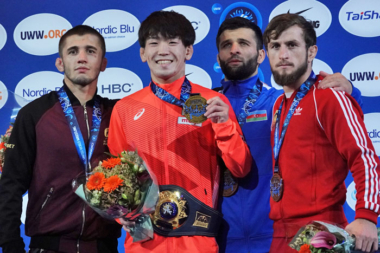 Matsui’s arrival might have surprised some wrestling fans, but with training partners and mentors like Kenichiro FUMITA (JPN), Shinobu OTA (JPN), Makoto SASAMOTO (JPN) among others at the Nippon Sports Sciences University, it should not be such a big surprise.

What might have been surprising is the way Matsui dismantled a world champ like Azizli before pinning him in the semifinals on Thursday and then taking apart the European champion Sefershaev in a second period flurry that went from 1-1 to 7-1 at warp speed.

The scramble with Sefershaev even included shooting down “the flying squirrel” – a desperation technique in which one wrestler dives over the opponent, tries to lock around the waist as he comes back to Earth all the while hoping to twist his opponent’s back to the mat for points.

It is a high-risk technique that Matsui sent plummeting in flames as he claimed his first senior world championship title.

From the silly to the sublime, Roman VLASOV (RWF) also won his third world championship title with a 2-1 decision over Sanan SULEYMANOV (AZE) at Jordal Amfi Arena in Oslo.

Over his career, Vlasov has struck Olympic gold twice — at London 2012 and Rio 2016, as well as winning four European titles over his career – a career forged in the model of the club’s namesake in Novosibirsk — Alexander Karelin.

At 72kg, Malkas AMOYAN (ARM), who won the European U23 crown in May, can now also claim a senior world title after a steady 3-1 victory over Sergei KUTUZOV (RWF). And, just prior to the gold medal match, Kristupas SLEIVA (LTU) of Lithuania came out of nowhere to defeat Mohammad Reza MOKHTARI (IRI) by technical superiority in 1:41

In Friday’s semifinal bouts, Victor CIOBANU (MDA), trailing 0-6 in the second period at 60kg, received a chance in par terre. Ciobanu secured a reverse waistlock and sent Gevorg GHARIBYAN (ARM) skyward for five points, then added a dive between his opponent’s legs for three more points, making the final score 9-6.

At 97kg, Mohammadhadi Abdollah SARAVI (IRI) was more businesslike with a pair of takedowns to defeat Nikoloz KAKHELASHVILI (ITA), 5-0, while Alex Gergo SZOKE (HUN) scored with a late gut wrench for a 4-4 win over Tracy G’Angelo HANCOCK (USA).