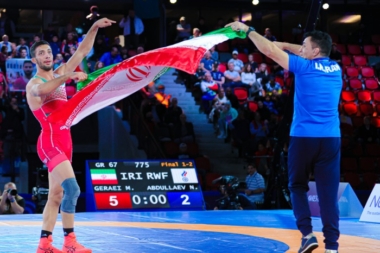 Iran won four titles in Greco-Roman in all, including individual titles Mohammadhadi SARAVI (IRI) and Aliakbaf YOUSOFIAHMADCHALI (IRI) in the two heaviest categories.

Dalkhani grabbed a 3-1 lead with the help of a first-period gut wrench, but Abuladze countered with his own gut wrench for a 4-3 lead. Closing in on the final minute of the match, Dalkhani attacked and Abuladze stepped out of bounds, making the score 4-4 in Dalkhani’s favor. And with a lost challenge, the final tally was 5-4.

Torba scored an early point out of bounds, but Shimizu responded in par terre with a five-point lift and back exposure. A gut wrench and takedown also gave Shimizu a sudden 10-1 triumph. Mammadov grabbed a 4-2 lead in the first period, but Tokyo 2020 Olympian Temirov came from behind to win 5-4.

In his first repechage bout of the evening, Shimizu started slow against 2021 Asia champion Sultan ASSETULY (KAZ), but took advantage of par terre in the second period for a 4-1 win to advance to the bronze medal final against Torba.

Tokyo 2020 gold medalist Geraei settled for a passivity point in the first period of his bout with Abdullaev, then dropped the 2020 European silver medalist for four points in the second period, making it a rare world and Olympic double triumph in the same year.

Tokyo 2020 Olympian Zoidze wasted little time in rolling up an 8-0 technical fall against Jafarov, the reigning junior world and junior European champion. The much decorated Kebispayev used a front headlock for a 4-point backdrop in the second period, adding another 2-point turn for a 7-4 win over European bronze medalist Firat.

Earlier, Tsuchika SHIMOYAMADA (JPN) was stunned with a sudden 0-7 deficit in his repechage match with world and European junior champion Jafarov. After his loss, Shimoyamada signaled his retirement from wrestling competition by leaving his shoes at center mat.

Tokyo 2020 bronze medalist Datunashvili blocked a back-arching throw to open the second period with 4-1 lead. Datunashvili, then, hoisted European silver medalist Maskevich and arched him over for a textbook 5-point throw and technical fall.

Gobadze, world champion in 2019, used a bodylock and drop for four points, and stopped the junior European champ, 5-1. Kulynycz, a 2019 European Games bronze medalist, took advantage of a lapse of concentration by 2019 junior world champ Takacs for the surprise fall.