TOKYO — Having missed out on an Olympic medal for the third time, Sohsuke TAKATANI is finding another way to earn a place in Japanese wrestling history.

Takatani became the third wrestler in Japanese history to win 11 consecutive national titles when he defended his freestyle 92kg crown with a 12-2 technical fall over 2020 Asian silver medalist Takuma OTSU in the final at the Emperor’s Cup All-Japan Championships. 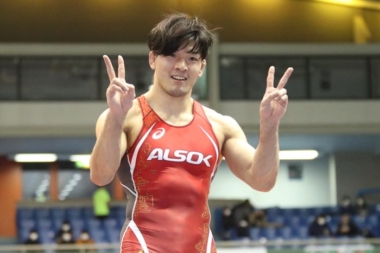 The 32-year-old Takatani, who has put together his run over four different weight classes, joined an elite group of 11 straight with Yasutoshi MORIYAMA, who won 16 in a row from 1982 to 1995, and Kyoko HAMAGUCHI, who won 12 straight from 1996 to 2007. His 11 titles puts him fifth on the all-time overall list.

“I think it’s a great honor, but for me, I wanted to become a memorable athlete by winning a medal at the Tokyo Olympics,” Takatani said. “With this, I feel like I’ve become an athlete who has left a mark.”

Takatani, the 2014 world silver medalist at 74kg, was the only wrestler among Japan’s 12 Tokyo Olympians that includes five gold medalists who entered the four-day Emperor’s Cup, held Dec. 16-19 at Tokyo’s Komazawa Gym. He qualified for the Tokyo Games at 86kg, but lost in the first round.

Takatani is currently taking a masters program at Tsukuba University in which he is researching why Japan’s heavier wrestlers can’t find the same success as the lightweights. On the mat, he intends to continuing using himself as a test subject.

Takatani said he will aim to make next year’s World Championships in Belgrade, which he can do outright by repeating his victory at the second domestic qualifier, the Meiji Cup All-Japan Championships in May. The Emperor’s Cup is also serving as the qualifier for next year’s Asian Games in Hangzhou, China.

“I am already 32 and each and every year becomes important, but more than just extending my record, I want to become an athlete who leaves an impression with those who see me,” Takatani said. 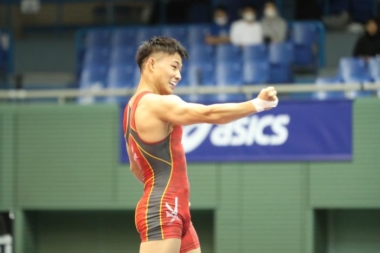 Daichi TAKATANI won his second national title and first at 74kg, giving him the crown his older brother Sohsuke had worn from 2011 to 2016.

Takatani’s victory also completed the second sibling double of his career with younger brother Daichi TAKATANI, who won the 74kg crown the previous day with a 7-2 victory over defending champion Kirin KINOSHITA.

In the 74kg final, Daichi Takatani went ahead 2-2 on criteria with a late stepout, then came away with the victory by scoring a 4-point takedown on a wild late scramble at the buzzer that was challenged but upheld, giving him his final point.

Takatani’s lone previous title came at 65kg in 2017, the year Sohsuke won his lone championship at 79kg on his way up to the Olympic weight of 86kg. The 27-year-old Daichi, a two-time Asian bronze medalist, now wears the 74kg crown that Sohsuke sported for six years from 2011 to 2016.

“It’s been awhile since we won together,” Sohsuke said. “I’m really happy. It was the day before I competed, but I was able to support him from the stands, and I think maybe that gave him a boost.”

In other freestyle finals, Toshihiro HASEGAWA, Japan’s lone freestyle medalist at this year’s World Championships when he won a bronze at 61kg, dropped down to 57kg and won his first national title with a 2-1 victory over Asian bronze medalist Yuto TAKESHITA.

Hasegawa gave up an activity clock point, then scored a takedown with a slick duck under in the final seconds in the first period. He then held off Takeshita, who had ousted 2019 world junior champion Toshiya ABE 2-1 in the semifinals. 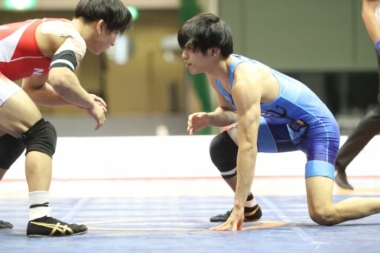 Toshihiro HASEGAWA, a world bronze medalist at 61kg, moved down to 57kg and won his first national title.

“There was part of me that was scared mentally this time, and I could not do my attacking wrestling,” said Hasegawa, the 2018 world U23 champion. “I was thinking too hard about winning. I think I could have done better if I had just tried to enjoy it more.”

While Hasegawa was moving down, 2016 Rio Olympic silver medalist Rei HIGUCHI went the other way, but came up short in a bid for a fourth career title and first in two years.

Yamanashi Gakuin University’s Ryoto SAKAKI scored a takedown in each period for a 4-0 victory over Higuchi in the 61kg final to add to a previous title won in 2019.

“Honestly speaking, I was unsure about whether or not I could win this tournament,” said 2017 world cadet champion Sakaki. “That I was able to take the title, simply put, I’m really happy.”

Higuchi won the 57kg title in 2019 in the first step of a bid to make it to the Tokyo Olympics in that weight. Fighting a constant battle against the scale, he lost a playoff for the ticket to Tokyo 2020 to former world champion Yuki TAKAHASHI — now a coach at Yamanashi Gakuin who was in Sakaki’s corner on Saturday.

“Higuchi is really good at grabbing an arm, and coach Takahashi and head coach [Kunihiko] OBATA told me to be particularly careful of that,” said Sakaki, a bronze medalist at last year’s Asian Championships. 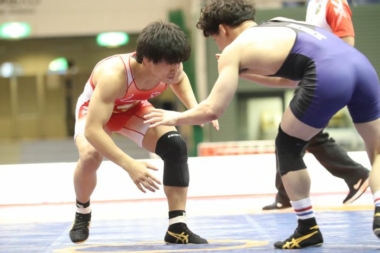 En route to the final, Sakaki defeated defending champion Kodai OGAWA of Nippon Sports Science University 2-2, avenging a loss to him a month earlier in the first round at the national collegiate championships.

Nippon Sports Science came away with two champions — both in clashes with wrestlers from Waseda University — with 2019 world junior champion Kaiki YAMAGUCHI successfully defending his 65kg title and Yudai TAKAHASHI winning at 79kg for his first national title.

Yamaguchi scored a stepout and an activity clock point in a tense 2-0 victory over Waseda’s Ryoma ANRAKU, a similar outcome of the 2020 final between the two that Yamaguchi won 2-1.

Yamaguchi, who finished 11th at the Oslo worlds, was a bit dissatisfied with his performance.

“I’m happy I was able to win the title, but the way the final went was the same as last year, and I felt it ended without bringing out what I had done in training,” Yamaguchi said. “The way I wrestled will ensure I lose in Asia, so I have to make more effort.”

In the 79kg final, Takahashi defeated Kosuke YAMAKURA 6-1, a repeat of his victory in the semifinals at the national collegiate championships in October.

Takahashi won the Meiji Cup last spring, but lost in a playoff for a place on the team to the Oslo worlds. As a high schooler in 2019, he appeared at the world junior, U23 and senior tournaments. He finished eighth at the junior worlds.

Another first-time champion was Taishi NARIKUNI, who took a unique approach to training that paid off with the 70kg title, capped by a 7-3 win over NSSU’s Hikaru TAKATA in the final.

The 24-year-old Narikuni seemed bound for glory as a national collegiate champion at Aoyama Gakuin University when his career hit a major bump in 2017. A doctor mistakenly prescribed a cold medication containing a banned substance, and he was hit with a two-year doping ban.

Narikuni did not return in earnest until last May’s Meiji Cup, where he placed third. He revealed at that time a lofty goal of winning world golds in both freestyle and Greco-Roman; he has had success at the latter, placing seventh at the junior worlds in 2017. 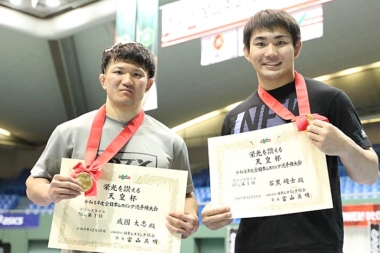 Taishi NARIKUNI (70kg), left, and Takashi ISHIGURO (97kg), long-time friends who started the sport together at the Gold Kids club in Tokyo, pose together after both won All-Japan titles on the opening day.

He said he had been debating which style to enter at the Emperor’s Cup. But his plan to qualify in Greco at the National Games was scuppered when that event was canceled, leaving freestyle as the only option.

Narikuni’s victory coincided with that at 97kg by Takashi ISHIGURO, who got his start in the sport alongside Narikuni at the Tokyo-based Gold Kids club run by Narikuni’s mother—a two-time former world champion under her maiden name of Akiko IIJIMA.

Despite the great disparity in weight, Narikuni trained with Ishiguro in the week leading up to the Emperor’s Cup — which was about the extent of the live wrestling he did in preparation. Now at coach at Gold Kids (he also has a part-time job at a karaoke parlor), his workouts since the Meiji Cup consisted solely of weight training, running and light sparring with the kids.

Narikuni said he does not feel rusty by lack of live wrestling. “I’ve been doing it since I was little,” he said. “It’s ingrained in my body. And also, I coach kids, and I roll around with them. So my body remembers the moves.”

Gold Kids has a long list of notable alumni, including Hasegawa, Tokyo Olympic champion Takuto OTOGURO and his brother Keisuke, and Ishiguro’s younger brother Hayato. All have won national titles.

“It was frustrating,” Narikuni said of watching those he grew up having such success. “Even Hayato won a title. Other kids I was with at Gold, they’re all winning championships, going to the Olympics. To be honest, I felt I was left behind.”

In the 97kg final, Ishiguro picked up his second national title by crushing national collegiate champion Keiwan YOSHIDA 10-0. He previously won at 92kg in 2017.

Ishiguro opened the scoring with a nifty ankle pick, then picked up four points with a double-leg tackle to the back. Two quick rolls after that and the match ended at 2:34.

At 86kg, Shota SHIRAI outmuscled Taisei MATSUYUKI 5-4 in the final, scoring four stepouts in building a five-point lead then holding on after Matsuyuki closed the gap with a 4-point trip late in the second period.

Ryuki YOSHIDA, last year’s champion at 79kg who finished fifth at the World Championships, moved up to 86kg but withdrew prior to the competition.

Taiki YAMAMATO won his second straight title and fourth overall with a close 3-2 victory over Hiroto NINOMIYA in the 125kg final.

Yamamoto, a teammate of Daichi Takatani at the Self-Defense Forces Physical Training School, led 2-0 before giving up a takedown with just under a minute to go, but quickly responded with a stepout point with :46 left for the victory.