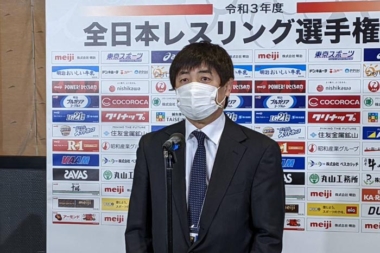 Kosei AKAISHI was named as director of performance enhancement for the national team leading up to the 2024 Paris Olympics.

Two-time Olympic medalist Kosei AKAISHI was named director of performance enhancement for the run-up to the 2024 Paris Olympics as organizational staff appointments were made at a meeting of the Japan Wrestling Federation board of directors on Dec. 19.

Akaishi, 56, served as assistant director of performance enhancement leading up to last summer’s Tokyo Olympics, where Japan’s wrestlers won five gold medals and seven overall. Akaishi was a silver medalist at freestyle 62kg at the 1984 Los Angeles Olympics and a bronze medalist at 68kg at the 1992 Barcelona Olympics. He also competed at the 1988 Seoul Olympics.

Backing up Akaishi are Shoko YOSHIMURA and Masatoshi TOYOTA, who were named as assistant directors of performance enhancement. Yoshimura, 53, was a five-time women’s world champion, and Toyota, 45, appeared at the 2004 Athens Olympics and at four world championships in Greco-Roman.

Four-time Olympic champion Kaori ICHO, 37, was added to the staff in the newly established position of “entourage coach,” along with two-time Olympian Takahiro WADA. The entourage coach’s function will be to provide team members with emotional support as well as technical. Wada, 50, was the freestyle performance enhancement director leading up to the 2016 Rio Olympics.