Yu SHIOTANI successfully defended his Greco-Roman 55kg title, winning all three of his matches after giving up the early lead at the Asian Championships, held April 19-24 in Ulaanbataar, Mongolia.

Japan also brought home five bronze medals from the Greco competition, which kicked off the tournament on April 19-20 at the Buyant Ukhaa Sports Palace. 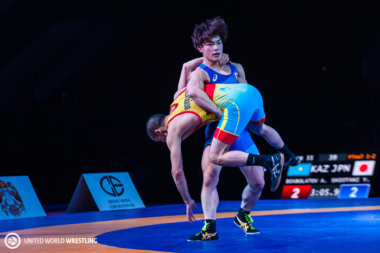 Yu SHIOTANI positions himself for a big 4-point throw in the final en route to repeating as Greco 55kg champion. (Photo: UWW website)

Shiotani scored his most dominant win of the day in the final, beating 2018 world U23 bronze medalist Amangali BEKBOLATOV (KAZ) by 13-2 tcchnical fall. After giving up an early takedown, Shiotani used his big lifts to storm back for his third come-from-behind victory of the competition.

Earlier, Shiotani had to rally late in snatching a 6-5 victory in the first round over Hyeokjin JEON (KOR) after trailing 0-5, then again in the semifinals, where he overcame a 4-point deficit to defeat Jasurbek ORTIKBOEV (UZB) 10-8.

Shiotani became just the second Japanese male in history to win consecutive Asian golds, following Takuto OTOGURO’s victories at freestyle 65kg in 2020 and 2021. (A large number of women have accomplished the feat, including several three-time champions.)

Last year, Shiotani’s triumph in Almaty made him, at 19 years 5 months 17 days, the youngest-ever Japanese Asian gold medalist in Greco, breaking the record of 21 years 4 months 23 days set by Kenichiro FUMITA when he won the 59kg gold in 2017. As Shiotani is currently 20 years 5 months 23 days, he now holds the top two spots on the all-time list.

Winning bronze medals were Ayata SUZUKI at 60kg, Katsuaki ENDO at 67kg, Shogo TAKAHASHI at 72kg, Kodai SAKURABA at 77kg and Takahiro TSURUDA at 97kg. For Suzuki, it was his second straight Asian bronze, while Takahashi added to one he won in 2019. The others were first-time medalists.

In the team competition, Japan fininshed fourth for the second straight year with 134 points.

With three reigning world champions in the lineup, Japan’s women once again asserted their dominance by winning seven of the 10 gold medals, along with two silvers, in the competition held April 21-22. 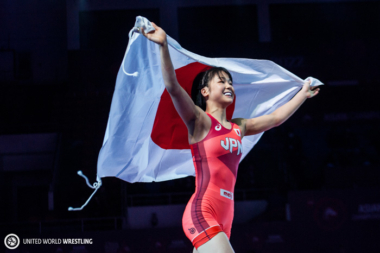 Akari FUJINAMI cruised to the women’s 53kg gold, winning all four matches by technical fall without giving up a point. (Photo: UWW website)

World champions Remina YOSHIMOTO, Akari FUJINAMI and Tsugumi SAKURAI － all making their senior Asian debuts－ cruised to gold medals in fields thinned out by the absence of China and North Korea.

The trio combined for 12 falls or technical falls among 13 victories, and gave up just 2 points overall. Most weight classes had less than eight entries, necessitating a group stage, while a few had just five, making the competition a single round-robin.

Yoshimoto had two falls and two technical falls in storming to the 50kg gold, while teenager Fujinami did likewise at 53kg, posting four technical falls without surrendering a point. Sakurai, who won the world gold last year at 55kg, moved up to the Olympic weight of 57kg for the first time and won five matches to take the gold.

Japan’s other gold medalists were Umi IMAI at 55kg, Sara NATAMI at 59kg, Nonoka OZAKI at 62kg and Miwa MORIKAWA at 65kg.

Ozaki produced the biggest shock of the tournament when she defeated two-time world champion and Tokyo Olympic silver medalist Aisuluu TYNYBEKOVA (KGZ) in the 62kg final. Ozaki, who lost to Tynybekova in the first round at the 2021 World Championships before coming back to take a bronze medal, was leading 9-1 when the Kyrgyz star defaulted due to an ankle injury. 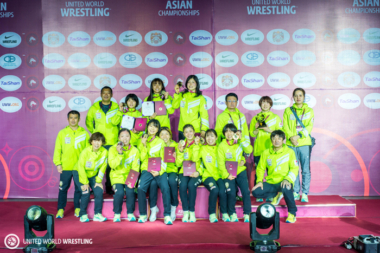 Imai notched her first international victory since winning the Ivan Yarygin Grand Prix in January 2020, and seventh straight dating back to the 2018 Asian Junior Championships. Natami and Morikawa struck gold in their international debuts on the senior level.

Sumire NIIKURA, who was competing abroad for the first time on any level, took a silver medal at 72kg, while Yuka KAGAMI, the 2019 champion at 72kg, finished second at 76kg. Naruha MATSUYUKI lost in the bronze-medal match at 68kg and finished fourth.

The Japanese squad easily captured the team title with 207 points, more than 60 points ahead of second-place Mongolia. It was the first team title since 2020, as the Japanese women did not participate last year.

Japan came away with two champions in the freestyle competition which closed the tournament on April 23-24, with 2016 Rio Olympic silver medalist Rei HIGUCHI winning the gold at 61kg and Taishi NARIKUNI triumphing at 70kg. 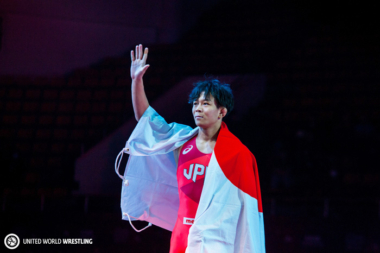 Higuchi, a bronze medalist in 2017, needed just 46 seconds to sweep aside young prospect Darioush HAZRATGHOLIZADEH (IRI) in the final by 10-0 technical fall, which he started with a quick 4-point arm throw.

It was Higuchi’s fourth technical fall in four matches, including a 14-4 win over 2020 champion Ulukbek ZHOLDOSHBEKOV (KGZ) in the semifinals as Higuchi notched his first major international title since winning the 2018 world U23 gold at 65kg.

In the 70kg final, Narikuni trailed 1-3 after the first period, but scored early in the second and went on to defeat world silver medalist and U23 champion Ernazar AKMATALIEV (KGZ) 4-3.

Narikuni, whose mother Akiko was a two-time world champion and his coach as a youth, advanced to the final with a 11-5 win over defending champion Syrbaz TALGAT (KAZ).

It marked the second time in recent years that Japan had two champions, after Takuto OTOGURO (65kg) and Shutaro YAMADA (82kg) both won in 2020.

Japan finished fourth in the team standings with 140 points.

The Japan Junior Queens Cup was held April 9-10 at Tokyo’s Komazawa Gym with competition in the U20, U17, U15 and Elementary School Grades 5-6 age groups. 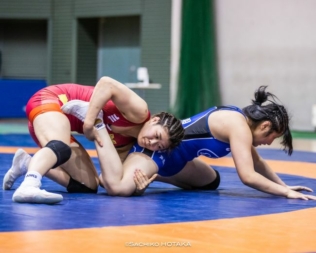 Nonoka OZAKI, left, warmed up for the Asian Championships with a victory at the Junior Queens Cup, which also qualified her for the World U20 Championships. (Photo: Sachiko HOTAKA)

In the U20 competition, Akari FUJINAMI and Nonoka OZAKI, prepping for the Asian Championships to be held two weeks later, both won their second straight titles in dominant fashion, winning all three matches by either fall or technical fall and without a giving up a point.

Fujinami, the 53kg champion, won her seventh straight title dating back to her victory in the Elementary School division in 2015, and was awarded the JOC Junior Olympic Cup for her performance.

Another member of the team heading to the Asian Championships in Mongolia, Sumie NIIKURA, triumphed at 72kg.

The JOC Junior Olympic Cup was held at Yokohama Budokan on April 23-24, with competition in both men’s styles for the U17 and U20 age groups. 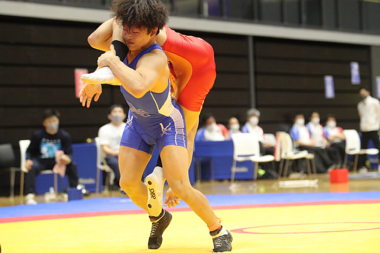 As a show of parity, the 10 freestyle titles were won by wrestlers from eight different universities or high schools, while nine of the 10 Greco-Roman champions were from different schools.

The winners at U17 and U20 earned a place on the national team to the respective world championships in those age groups, while the second-place finishers will represent Japan at the Asian Championships.