Japan sent the core of its Greco-Roman team for the upcoming World Championships to the Wladislaw Pytlasinski Memorial tournament in Warsaw, Poland, on July 23-24, and came away with two gold medals, two silvers and a bronze.

Kenichiro FUMITA, appearing in his first international tournament since winning the silver medal at last year’s Tokyo Olympics, won the gold at 60kg, and Yu SHIOTANI, coming off a second straight victory at the Asian Championships, triumphed at 55kg. 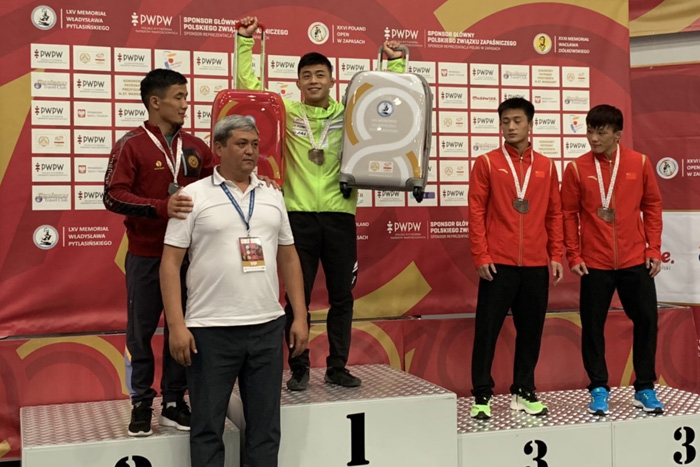 Kenichiro FUMITA won the 60kg gold in his first international competition since winning the silver medal at the Tokyo Olympics.

Tokyo Olympic bronze medalist Shohei YABIKU, in his first overseas outing since the Olympics, took the silver at 77kg, as did Kyotaro SOGABE at 67kg. Minto MAEDA was a bronze medalist at 77kg.

Fumita, a former two-time world champion, advanced to the final with three victories by either fall or technical fall without conceding a point. He was awarded the gold when 2021 world silver medalist and current Asian champion Zholaman SHARSHENBEKOV (KGZ) defaulted the final due to injury.

Shiotani advanced to the final with victories in his preliminary round-robin group over African champion Adballa SHAABAN (EGY) and Florin TITA (ROM), the silver medalist at the UWW Ranking Series tournament in Rome. He bested Jiahao LIU (CHN) 5-2 for the gold.

Yabiku posted victories over Makysm ZAKHARCHUK (POL) and Fabio DIETSCHE (SUI) to set up a semifinal clash with Maeda, whom he defeated in a wild match. After Maeda stormed to a 7-0 lead in the first period, Yabiku cut the gap to 7-5 in the second before throwing Maeda to his back for a fall at 5:01. In the final, Yabiku lost 3-1 to 2021 European silver medalist Zoltan LEVAI (HUN).

Fumita, Shiotani and Yabiku will all be on the team to the World Championships in September in Belgrade, Serbia.

Following the competition, the team members remained in the country to participate in an international training camp in Spala that started July 25 and drew more than 100 wrestlers from 10 countries. They are scheduled to return to Japan on Aug. 7.

Meanwhile, two Japanese women participated in the Poland Open that was held concurrently at the same venue in Warsaw, and Miwa MORIKAWA won the title at 65kg and Rin MIYAJI won a bronze medal at 68kg. 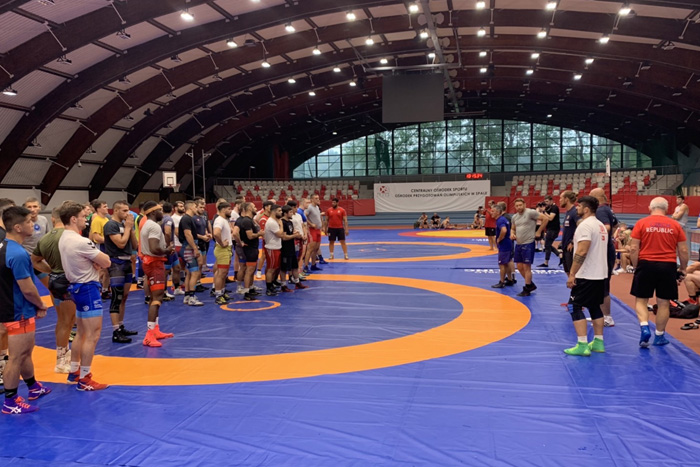 Following the tournament, the national Greco team participated in a training camp in Spala, Poland, that drew wrestlers from 10 countries.

The Asian U20 Championships were held July 5-10 in Manama, Bahrain. Japan won two bronze medals in Greco-Roman, six golds and a silver in women’s wrestling and two silvers and two bronzes in freestyle.

The Greco bronzes were won by Komei SAWADA at 63kg and Hajime KIKUTA at 72kg. It was the first international medals for each wrestler. Overall, the Greco squad fell short of the one silver and three bronzes won the last time Japan entered the tournament in 2019,

The women’s champions were Yu SAKAMOTO at 50kg, Mako OONO at 55kg, Narumi NAKAMURA at 59kg, Nana IKEHATA at 62kg, Yuki FUJIKURA at 72kg and Nodoka YAMAMOTO at 76kg.The group exceeded the four golds won in 2019. 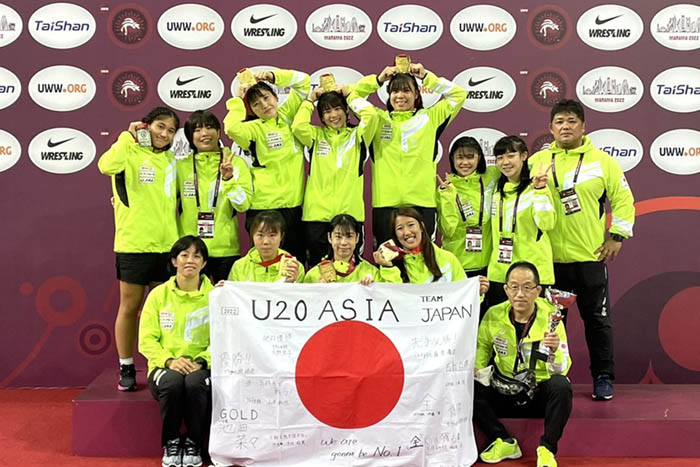 The women’s team celebrates after edging out India for the team title at the Asian U20 Championships. (photo courtesy of U20 team)

In freestyle, Makoto HOSOKAWA at 65kg and Subaru TAKAHARA at 79kg won silver medals, while bronzes went to Daiju SUZUKI at 70kg and Ryotaro TOGIYA at 74kg. Japan finished fourth in the team standings with 123 points. It marked a step down from the previous results in 2019, when Japan placed second after capturing two golds and four bronzes.

Girls finish 2nd at Asian U15 despite 3 golds

Preceding the Asian U20 Championships was the U17 tournament July 2-4 in Manama, to which Japan sent teams in the girls’ and freestyle competitions. Every member of girls team came home with a medal, winning three golds, three silvers and four bronzes, which was still only good enough for second place in the team standings. The freestyle team captured one gold, one silver and two bronzes to finish fifth.

The girls’ champions were Saika UCHIDA at 36kg, Yuu KATSUME at 58kg and Sae NOGUCHI at 58kg. India showed the progress it is making by matching Japan’s results from the 2018 and 2019 tournaments by winning six golds and taking the team title.

Yamato FURUSAWA ensured that Japan would have a freestyle champion for the third tournament in a row (the event was not held in 2020 and 2021) by taking the gold at 41kg. 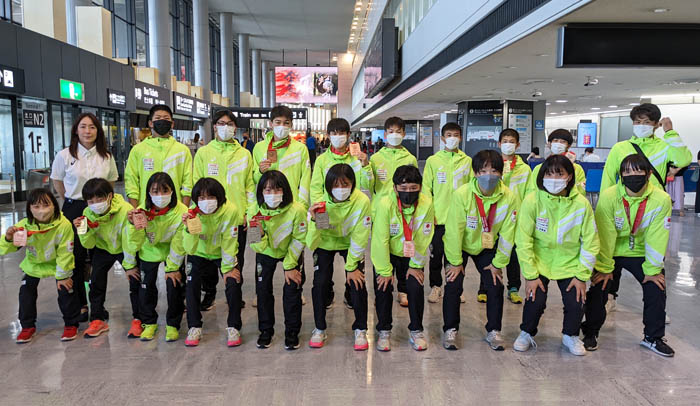 The girls and freestyle teams pose for a group photo upon returning from the Asian U15 Championships in Bahrain.

The World U17 Championships were held July 25-31 in Rome. Japan’s girls had a strong showing, winning three golds, four silvers and a bronze, and despite not having an entry at 43kg nor coming close to the six golds won the last time in 2019, still walked away with the team title with 180 points. India had five champions but finished second, 31 points in arrears.

As Japan did not send a team to last year’s tournament, it cannot be said that it won consecutive titles. But in tournaments that it has entered, Japan has now won the team crown seven times in a row. (The 2020 tournament was canceled.)

Grabbing golds were Koko MATSUDA at 46kg, Sowaka UCHIDA at 57kg and Anju SATO at 65kg. The four silver medalists were Mona EZAKA at 40kg, Mihoko TAKEUCHI at 49kg, Sakura ONISHI at 53kg and Chisato YOSHIDA at 69kg, while Suzu SASAKI took a bronze at 61kg. 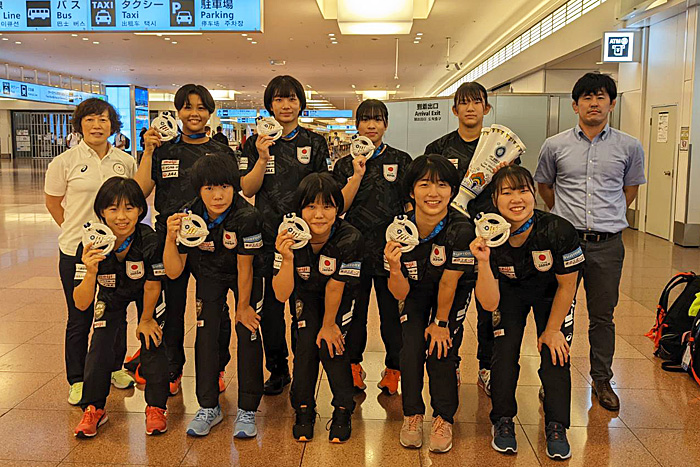 The squad that won the team title at the World U17 Championships poses together upon returning to Japan.

In freestyle, Taiga OGINO won Japan’s lone medal when he took a bronze at 60kg. Japan finished ninth in the team standings with 39 points, a significant drop from the fourth-place finish and five bronze medals the previous time in 2019.

The Greco team finished out of the medals completely after taking five bronzes in 2019, with a pair of fifth places marking the best results. The team finished 11th with 42 points.

Newly married and wrestling under a new name, Yuki TANAKA (formerly IRIE) looked much like the star who gave Olympic champion Yui SUSAKI such fits in recent years when she returned from a 2 1/2-year layoff to win the women’s 50kg title at the All-Japan Non-Students Championships.

Tanaka won all four of her matches without conceding a point in the tournament held July 2-3 at the Fujimi Municipal Gym in Saitama Prefecture.

Tanaka, who eventually lost out to Susaki in a bid to make the Tokyo Olympics, married former freestyle 125kg wrestler Tetsuya TANAKA, who also was unable to fulfill his Olympic dream. Having returned to the mat, Yuki is now aiming to make the 2024 Paris Olympics.

Tanaka remains the only wrestler in the world to have defeated Susaki dating back to the Olympic champion’s first year of junior high school in 2012—and she did it three times. Susaki has won all 197 of her other matches. 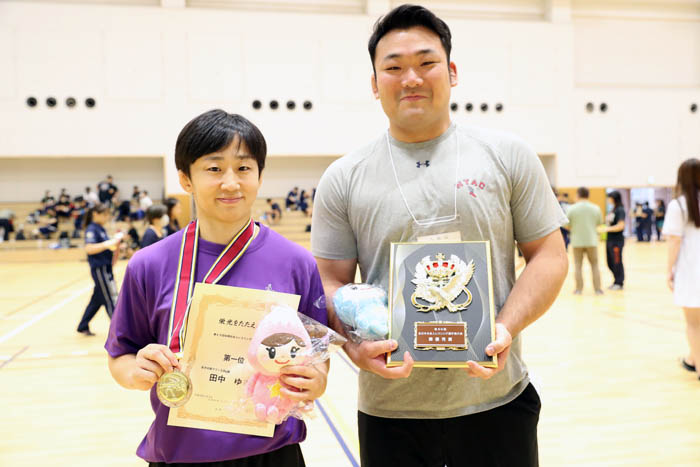 Meanwhile, recently crowned Asian freestyle 70kg champion Taishi NARIKUNI, who will be heading to his first senior World Championships in September, went for a change of pace and entered the tournament at Greco 67kg.

In a five-man round-robin, Narikuni lost his final match to Kensuke SHIMIZU, who had previously been defeated by Ryoma HOJO. That left all three with 3-1 records, with Narikuni taking the gold based on classification points.

Narikuni says he may try to qualify for Paris 2024 in Greco as well. 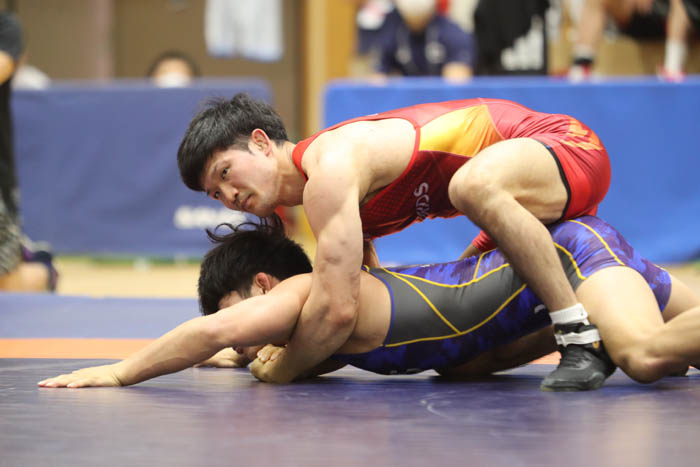